Here I document how I overclocked my netbook from 1.2 GHz to 1.43 GHz using a simple software program and some trial and error. Performance was improved, with only a modest increase in load temperatures and no increase in Vcore.

Recently my laptop (HP DV8372EA) suffered a rather high-speed encounter with a floor, which resulted in a broken screen, DVDRW drive and a twisted chassis. While the laptop is away for repair (or, for them to decide it can’t be repaired and send me vouchers for a replacement) I had to resort to the netbook, a Packard Bell Dot M/A, for my studies. As a postgraduate student I spend a lot of time processing and fitting data and often run multiple applications. The unit is pictured below next to my girlfriend’s Studio 15.

It’s a pretty standard specification for a netbook: a low-powered, single-core CPU with a small yet decent screen and an average-sized hard disk drive. However, I am used to heavily multitasking. I typically have Spotify, Excel and/or Word and/or Powerpoint, Chrome, PuTTY and Outlook all open at once. I also frequently use apps such as Bruker Topspin  and Berkeley Madonna as well, both of which can lean heavily on system resources. The machine copes admirably with the thrashing, but there was potentially something to gain from overclocking.

Performance was gauged at stock using two tests. SuperPI Mod 1.5 XS tests the CPU power and 3DMark2001SE gauges the gaming ability of the laptop. An older version of 3DMark was chosen deliberately; the graphics card isn’t particularly strong and so using a newer benchmark would potentially result in low scores, overclocked or not. 3DMark2001SE is most likely to show improvement with higher clock frequencies. In terms of games you would play on a netbook, a lot of these are from around the early 2000s.

I managed to overclock the netbook using SetFSB, but not without crashing the machine a few times. Packard Bell and Gateway are both owned by Acer, and my netbook shows striking similarity to the Gateway LT3103. A thread on a Gateway Netbook forum suggested how SetFSB could be used to overclock the machine, however the instructions would not work for me.

Instead I experimented; the ICS9248BF-102 profile in SetFSB, pictured below, has thirty possible settings. Settings 1, 3, and 10 crashed the netbook. Settings 9, 10, 19 and 20 increased the FSB from 200 MHz to 240 MHz (and hence clockspeed from 1.2 GHz to 1.43 GHz). The remaining settings did nothing. CoreTemp was used to double check the CPU frequency and to monitor temperatures. I was slightly disappointed that I couldn’t reach the 1.6 GHz claimed elsewhere to be achievable, but resorted to testing out my new found extra speed. 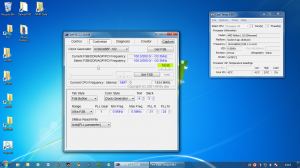 The same two tests were run, again in duplicate. 3DMark2001SE scores were 3155 and 3134 3DMarks and SuperPI (1 M) times were 1 min 8.796 s and 1 min 5.333 s. This corresponds to a 21% increase in 3DMarks and a 22% decrease in SuperPI times. Of course, there’s only one overclocked data point here (I couldn’t get an intermediate overclock) but performance seems to increase by the same proportion as the overclock.

There was a modest increase in temperatures. Under load (Rosetta at Home), temperatures are 58 – 59 °C while overclocked. This is a modest increase from 52 – 54 °C when at stock. The laptop is used at a desk for now anyway, so a few degrees doesn’t make a difference. For the same reason I haven’t assessed the impact on battery life. I always put it into ‘Power Saver’ mode when it’s on the battery; performance is less of a concern if I can get extra time away from the mains power. 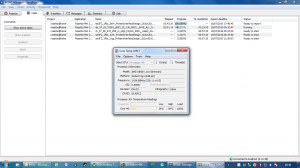 A Subjective View on Performance

Of course, not all performance can be measured entirely objectively and quantitatively. The laptop in general feels faster although there is opportunity for a “Placebo effect” of sorts to creep in here, knowing that the machine is overclocked. Watching high-definition video is one of the most challenging things a netbook might be asked to do, and with this in mind I tested a few videos out.

I downloaded some sample 720p and 1080p videos in WMV format from Microsoft (“Robotica”). These videos played smoothly at both at stock and overclocked, so don’t represent a great test of the increased clock speed. 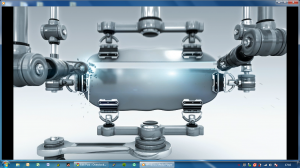 I sought a couple of tests that would perhaps be very difficult at stock, but easier overclocked. I came up with two tests.

Watching the 480p YouTube video in Firefox was fine; the playback was smooth. The 720p version of the same was a different story: very choppy with most frames dropping. Likewise, the 720p TV episode wasn’t watchable as the netbook could not keep up. Once overclocked the results were variable. The 720p YouTube video still wasn’t smooth, with occasional dropped frames. It was, however, a noticeable improvement compared with stock performance. The TV episode was far better – it was smooth enough and very rarely stuttered. I’d be quite happy to watch a whole 720p TV episode on this machine. I suspect that even overclocked the netbook cannot handle the processing overhead of Flash and a web browser but the extra speed allows it to play HD content in VLC.

It took less than half an hour to sort out a decent boost in performance on what is viewed as typically a low-power machine, without any increase in VCore. The only trade off is a small increase in CPU temperature, which should make any (inevitable) decrease in CPU lifetime modest at worst.