Lian Li is known for killer cases. Mostly all aluminum, they can border on works of art. When they approached us about reviewing a benching station it took me by surprise. They have released a couple new benching stations, the PC-Q06 and the PC-T60, the former of which we’ll be sinking our teeth into today.

The PC-Q06 is actually a mini-ITX test bench, which is good for testing mini-ITX boards but doesn’t do a whole heck of a lot of good for overclockers. They weren’t sleeping on their laurels though and have also released an ATX motherboard tray that mounts right on top of the unit. Here are the specifications for the base station:

Like a lot of cases, the PC-Q06 comes padded with foam and bagged in plastic. Thankfully, that’s a great way to protect it. This box came straight from Lian Li in Taiwan and it took a good beating on the way here.

Looking Around the Base Station

This section is going to be more of a gallery. The first impression of this thing is like a lot of Lian Li cases – the quality of craftsmanship is obvious from just looking at it. Let’s do that, shall we?

First, a look ’round the table at eye-level. 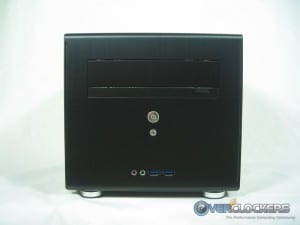 As you can see, the PSU mounts in the bottom of the unit, exhausting out the back. The vented grille above the PSU is held on with four thumb screws. There is a U-shaped cutout that both allows wires to come through and wrangles them into a central area.

On the bottom of the unit, there is a mesh filter to keep the air coming into your power supply clean. 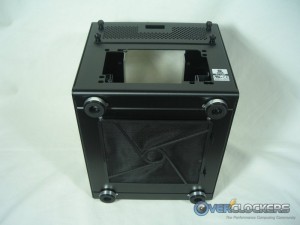 The filter is easily removable for cleaning when it becomes necessary. Rubber feet elevate the case and keep it from moving on you. The attention to detail is remarkable; even the feet look good. In case you missed it above, there is also a cover over the ODD bay to keep the look uniform.

The power and reset buttons on the front are accompanied by a headphone jack, microphone jack and a pair of USB 3.0 ports, a nice touch. 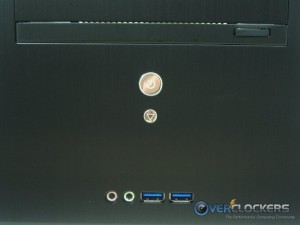 Now let’s have a look around from above. Warning: gratuitous photos from all four angles to follow!

In these photos, you can see the ODD bracket, set back a little bit to account for the matching facade. You also see one of the biggest beefs with the design of this station. There is no easy way to install a hard drive. Well, it’s not difficult by any means but they didn’t go out of their way to make it easy on the user.

To install a hard drive, you must remove two screws from two separate brackets. Then you install them on your HDD outside the case. After you do that, you can re-install the separate brackets, now with a HDD in between them. All told, that’s eight screws to remove and re-install every single time you change a HDD.

Some sort of hot-swappable tray would most definitely come in handy here. The bay on top of the Cooler Master CM 690 II Advanced reviewed previously has spoiled me. Something like that wouldn’t take up a whole lot more room and would make using this benching station a whole lot easier on the end user. This is a benching station after all, not a case. Presumably people won’t use it for 24/7 operation, and the need to change out hard drives might pop up quite often.

Enough admiring the exterior though, let’s pull one of the side panels off and look inside.

Before looking in though, we are brought to our second issue. The side panels have no less than six teeny, tiny screws to pull off. For installing an ODD (or fan controller) and PSU, that’s twelve screws. This isn’t nearly as annoying as the HDD issue since it won’t come up nearly as often, but it’s worth mentioning.

To mount your power supply, you simply set it in convenient guide rails and push it back into its perch, securing it with whatever screws came with the PSU. ODD installation is equally straightforward. If you want to install a fan controller (common for benchers), you have to remove the bay cover, which is easily accomplished with only a couple of screws.

I saved the best photo for last. What you’ll be struck by when seeing this thing for the first time is it’s size. It. Is. Tiny. Cute even. Here it is next to a processor box, making it look like it holds the worlds biggest stock cooler. 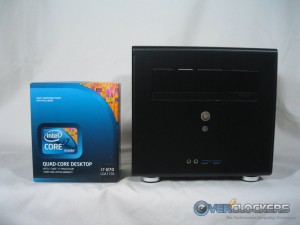 The small footprint is a boon to benchers that are pressed for space. It can sit on your desk, right next to your keyboard, mouse, monitor and – dare I say – LN2 thermos.

With only a couple issues, the base station itself is very well put together and would do very well as a mini-ITX test bench. Not many mini-ITX boards overclock though, so let’s get this thing ready for a real system, shall we?

To make the station useful for benchers, Lian Li has released an ATX tray that mounts where the mini-ITX board otherwise would. 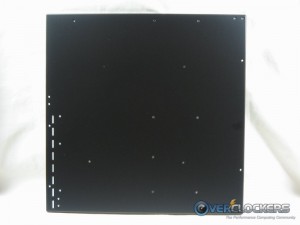 The tray comes complete with eight-slot expansion card bracket and a slew of stand-offs and screws. 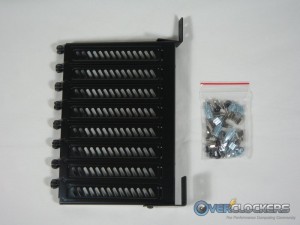 Put them together and you can see we’re now on to something we can use! 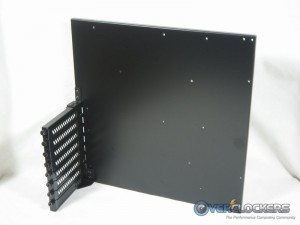 Installation is pretty straightforward, at least until you realize that there is no PSU on earth with wires long enough to do what is being asked of them. The one used in this review is the Cooler Master Silent Pro Gold 800W examined last week. The 24-pin and PCI-e harnesses aren’t necessarily the longest on the market (500mm and 600mm, respectively), but they’re not short either.

Here’s the problem. The power supply is mounted in a way that the hot air exhausts out the rear of the case. So far, so good. Where you run into an issue is when trying to get the wires out. Just to merely be outside the case, the wires have to run the entire length of the PSU, then exit the case. After that, they have to cross the entire ATX Tray to be able to plug in.

Now you’re faced with two choices. Either you purchase extensions for the cables so they can reach or get inventive. The latter is cheaper, so let’s go with that. What you can do is manipulate the 24-pin and PCI-e harnesses up through the gap in front of the HDD and ODD bays. While the table is obviously not designed for this, it’s not too difficult to accomplish with a little elbow grease.

Two items to keep in mind if you go this route. First, it was simple for me to get the wires out because I went with a fan controller. If you plan on using an ODD, you’ll want to pull the wires through before installing it. Second,  rather than the two standoffs stacked on top of each other as recommended in the ATX Tray instructions, you will need to add a third so it’s not putting pressure on your harnesses.

There is a plus side to all of this though. You don’t have to have a bunch of wires over top of your board while benching. That also makes it look a heck of a lot better installed. While it’s a minor inconvenience, this is far from a deal breaker. Heck, even if they were long enough I’d have done this anyway for just those reasons.

One last photo and we’ll finish putting the station together; here’s the HDD all mounted up. 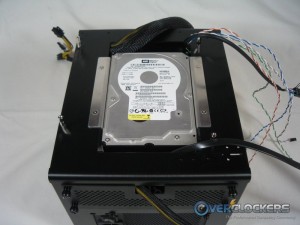 The good part is, after you’ve reached this stage, there is pretty much no reason to go back into the belly of the beast unless you need to add another PCI-e cable.  The HDD is accessed from outside, so it can be changed without removing a side panel – a definite plus (well, you have to remove the ATX tray but that is a mere four screws).

Now let’s stick the tray on here, put the side panels back on and see where we stand! 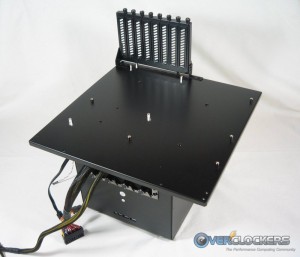 Now we’re cookin’ with gas! There is one thing to note about the card bracket. From the factory, they come set up from the tray a little bit, as you can clearly see in photos two and three above. It’s a simple matter to re-mount the bracket’s, um, brackets such that it sits flush against the tray. Save yourself some time and do that before installing the bracket on the tray. In its factory configuration, it doesn’t allow the card to sit fully in the motherboard’s PCI-e slot.

Without further ado, here’s a system installed on this puppy! 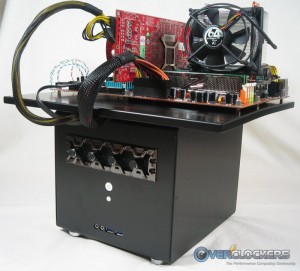 There you  have it folks. A benching table for the ages. Tiny and packed to the gills, it has everything important where it counts!

First off, the look of this thing is just beautiful. Anyone would be hard pressed to find a better looking little cube than this one. It has all the quality and beauty we’ve come to expect from Lian Li. It’s certainly not perfect though. With a few improvements a good benching station could be made superb.

The pros on this station far outweigh the cons. While the latter aren’t nitpicking by any means and could substantially improve the benchmarker’s experience, none of them are deal breakers. For anyone that has a tight space, or just prefers their benching rig right next to them on their desk, this little station has your name on it.

At Newegg, the base station is available in silver or black for $79.99 and red for $89.99. The ATX trays are brand new and it doesn’t appear Newegg has received them yet, but Lian Li said their MSRP will be $17, which would make the ATX-style station total just under $100. Considering the quality you’d be paying for, it’s worth every penny!