Cooler Master has recently released a new series of power supplies named Silent Pro Gold; we did a short news item that included them a while ago. Now that these units are out we have been sent one to have a look at: specifically the Silent Pro Gold 800W, model # RS800-80GAD3-US.

I’ll say right up front this is not as in-depth a review as can be found elsewhere, but more a tour of the equipment and a short test. We lack the equipment at present to do a proper power supply review (though we were sort-of close; the future is bright down the road in that department), so we’ll leave that to the professionals. What we can do is walk you through the features and give you a good detailed look at the unit.

Not a bad list at all; with enough connectivity to power plenty of drives and a few accessories as well as three 6+2 pin PCI-e and three 6 pin PCI-e connectors, there is a lot of flexibility for a pretty hefty SLI/Crossfire setup.

This unit retails for $169.99 at Amazon and Tiger Direct. Newegg doesn’t have this listed just yet.

The Silent Pro Gold box is, of course, gold with some black as well. It’s not exactly subdued but it’s not gaudy either. 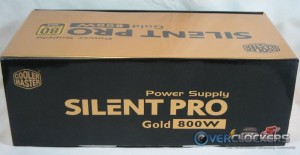 Opening the box, we find a very snug, well-packed unit. It should survive a trip without any dings, dents, or any other damage for that matter. 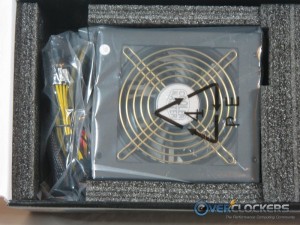 First Look at the Power Supply

Pulling it from its protective cocoon of foam and plastic we are met with quite a nice looking power supply. It’s not gaudy by any means and doesn’t hit you over the head with flashy gold; thankfully the tone they chose is not metallic enough to be annoying. The unit itself is quite solid and feels stout for such a small package.

Not all is perfect however: it would seem that the Cooler Master logo didn’t make it out of the factory unscathed. 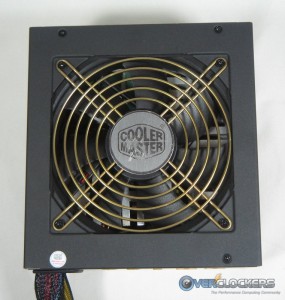 The last photo in this section is arguably the most important…amperage ratings! 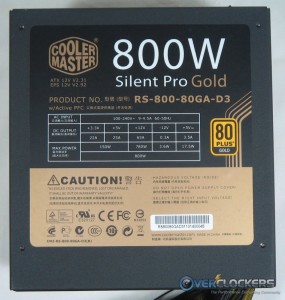 There are plenty of cables to hook up a host of peripherals / video cards at your disposal. Here are their lengths, from the cooler master site. 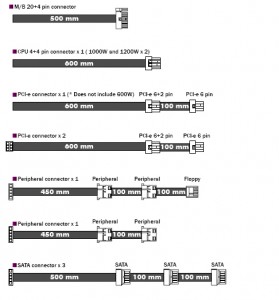 Three of these come hard-wired. Chances are you’ll need all three of these with any build ever completed, so this implementation makes sense. Additionally, these three hard-wired connectors come sleeved.

You’ll notice an interesting feature on this PCI-e cable, as well as the modular ones. They have both a 6+2 pin and 6 pin connector on them. This is unlike a lot of power supplies with the usual single 6+2 or 6 pin per cable. Since it’s a single-rail unit you don’t have to worry about how the load is split, so no worries there.

Assuming your card can’t pull enough current to burn the 18AWG wires I think it’s a great idea. This handy-dandy .pdf tells us 6-to-15 strand 18AWG wire can handle 10.5A generally speaking. There are six wires on each cable, three positive, three negative. It would take one heck of a card to draw more than 30A by itself. So, mostly safe, this configuration is definitely a boon to wire-management freaks.

What doesn’t please said freaks is the lack of sleeving on the modular cables. This is par for the modular-PSU course so there’s no surprise here. The clean freak in me would really prefer sleeved cables all around, even on the modular cables. Not that there are any models that do this (though the new Corsair AX1200 sleeves a few of them), but it looks so much cleaner it would be worth a few extra bucks. That said, as-is they are quite flexible and easily maneuverable.

Interestingly, the modular cables and main power cord come in a fabric pouch, handy for storing the extras.

There are plenty of PCI-e connectors and SATA connectors. It would have been better to have a few more MOLEX connectors to go with them. Only having four in total (two on one cable and two plus a floppy connector on the other) seems a bit low. Yes, SATA has pretty much taken over for drives but other things like fan controllers and water pumps still use MOLEX connectors. A few more certainly wouldn’t have hurt anything; even adding one more to the existing connectors to total three-per-wire would have been something. Not a huge gripe but it’s worth noting.

The cable connectors have a solid feel to them when inserted into the power supply. They don’t wiggle around and should be able to withstand multiple insertions without issue.

Last, but not least, let’s look around what’s inside this thing.

Now we get to the fun part. After firing the unit up and making sure it put out the proper voltages (it did, exceeding all by a tenth or three), the cover came off. 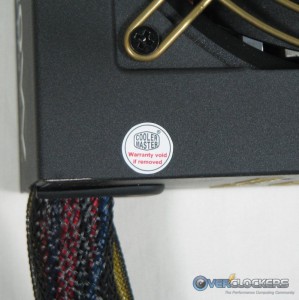 Won't Be Sending This One Back

Cracking open the unit, the first thing we are faced with is the fan. It’s 120mm large, manufactured by ADDA and rated at 0.34 A. 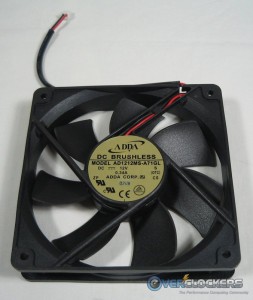 Moving along, let’s have a look at the interior.

In this photo showing the transient filter, you can see the wires coming off of it are white, black, & green. 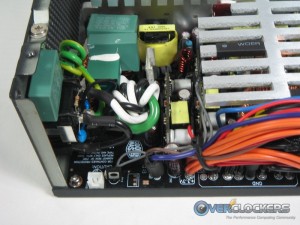 Thanks to Hardware Secrets’ nice guide on discovering power supply manufacturers, we see that Enhance Electronics is the only manufacturer to use black & white wires. While it would have been nice (and easier) to use the UL number to discover that tidbit, it appears Cooler Master has paid for their own UL number (E320127), not unlike a number of other brands.

Enhance makes a broad range of power supplies for companies from Antec to SilverStone. While all power supplies are made to specifications set forth by the company they are made for, their units generally seem to be of good quality.

A couple final photos and we’ll be done.

One thing is for sure, this is a completely different unit (indeed, it’s a different OEM) than Cooler Master’s GX750 that Oklahoma Wolf reviewed at JonnyGURU. That unit did not perform well, but I’ve got higher hopes for this one.

Hardware Secrets has already reviewed the Silent Pro Gold 800W we’re looking at.  They awarded the unit their Silver award. It did rather well, producing the rated current and maintaining solid voltages. It also did ok with respect to ripple and noise, staying within specs, if not spectacularly so. The biggest gripe was the -12V rail; its ripple was well outside where it should be. While not really a highly important section of the power supply any more, that’s not good enough to excuse out-of-spec readings.

They get another chance though! OCF’s own Oklahoma Wolf has one of the Silent Pro Gold units and told us that his review should be out at JonnyGURU.com the week of July 25th. Definitely looking forward to seeing how it performs under his very strong microscope!

Editor’s Note – Oklahoma Wolf’s review of the Silent Pro Gold 1200W is out and it performed admirably. Check it out here at Jonny Guru!