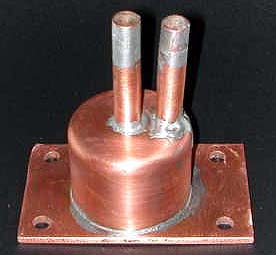 This water block was made in about 2 hours for less than $5. I call it my ‘Copper-Cap’ water block – you can see how I made it HERE.

I made it after thinking about the way Swiftech uses a large internal volume and an inlet that sprays right above core (which mine does more or less). I was trying for simplicity in construction and low cost. It wasn’t lapped that well because I wasn’t that concerned about lapping at the time and I think, in retrospect, I could have lapped it better. I found that it performed on par with my earlier Mark I ‘maze’ style water block.

The performance of my more difficult to construct and larger Mark II ‘maze’ style water block is better, but the copper-cap water block was still a big improvement over a cheap heatsink fan cooler, IMHO. After all, I was going for simplicity and low cost and with those criteria, it’s a winner in my book.

It was fun to make and fairly easy to construct. If you’re a beginning water block maker who wants to avoid a lot of drilling, it’s definitely worth a try. For me, the fun is in the making of the blocks and hopefully it will be for you too!

Just remember to be safe and wear your safety glasses.

Owen has kindly consented to allow us to test a waterblock that is representative of “first efforts” at building your own. Owen made no attempt to pretty it up, nor did he go to any great lengths to lap the base extremely flat.

Without question, the baseplate flatness hurt the waterblock’s performance, but it should be noted that it had rather high flow resistance as well – without any improved cooling deriving therefrom. By current standards, it is unfair to presume that 3/8″ connections are intended for high flow rates and, if used with a smallish pump, it does present a low cost entry to watercooling. And one can say as well that they certainly did ‘roll their owen’.

As rough as this waterblock is, note that its performance is not all that bad – it’s about 2C worse, at 100 watts, than Hoot’s Pin Fin block:

However, considering head loss, substituting Owen’s block with the same waterpump will result in a performance decrease of more than 2C.

DIYers interested in testing their own waterblock can find out more HERE.