A number of readers emailed me about the Simulated P4 CPU Die Testing, with questions about the heat pattern of the P4 vs the Die Simulator. The issue raised was that the Simulator’s heat pattern is assumed to be uniform while the P4’s is not; what no one could address (so far) is what this pattern, in fact, looks like.

OK – being of curious mind, I decided to add one more thermocouple to the P4 1500 that I’ve been using for motherboard P4 heatsink testing so that I could measure temps at its edge: 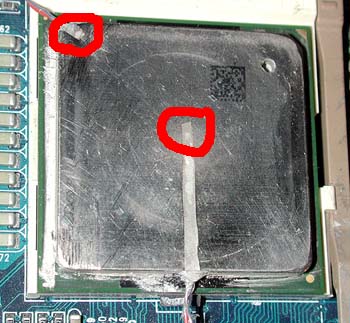 I cut a small groove into the edge and thermal-epoxied a second thermocouple into it. This enables me to measure temps on both edges at the same time, recording the temp differential between the center and extreme edge of the P4’s IHS (thermocouple locations circled in red). Both thermocouples read exactly the same temp without the CPU powered up.

I recorded temps with five heatsinks after running Prime 95 for about 30 minutes – enough to stabilize the motherboard and heatsink. What I found was interesting:

Clearly, there is a difference depending on what heatsink was used – no surprise there, as I expected that each heatsink would interact with the IHS differently. However, the differences are not all the great (3.5 C among those tested) and, contrary to what I would have expected, the aircooled heatsink distribution was more uniform with aluminum rather than copper or copper cored heatsinks (although limited samples).

Further, these reading are under high CPU loadings. At idle, the picture changes quite a bit. In some cases, the temp pattern reversed for a while, with the edge temp reading HIGHER than the center temp (I speculate that this is due to secondary heat path effects, probably due to the CPU’s pins transferring heat) – this was a surprise. At idle, the temp differential between the edge and center averaged about 0.5 C.

I then mounted a thermocouple on the side of the Simulator’s die and found a difference of 1.9 C from the center to its edge. Ergo, there is a temperature gradient on the Simulator as well; removing some insulation may increase the gradient, but as a heatsink tester, I think it’s fine as is.

The P4 results are a sample of one CPU only. I am more than happy to post any test results which confirm or contradict these observations.

One can infer that under “normal” use, the IHS in fact does a fairly good job at spreading core temps over the IHS. Even under stress, the differential between edge and center temps does not infer an extreme temp gradient over the IHS.
{mospagebreak}

Some folks have emailed me suggesting that Intel’s P4 “Integrated Heat Spreader” is more for CPU core crush protection than for spreading heat, even going so far as to postulate that the area beyond the CPU core contributes very little to CPU cooling.

I thought about an experiment that might shed more light (or confusion) on this question.

I took a Cho-Liang P4 heatsink 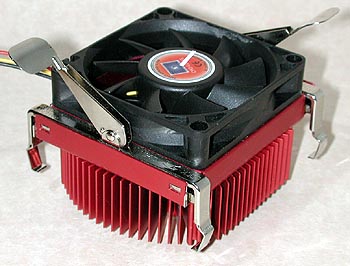 with an aluminum base pictured below: 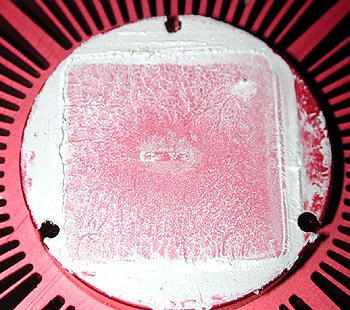 I mounted it on the P4 CPU which has thermocouples in the center and edge of the IHS, ran Prime 95 and recorded temps. I then shaved down the heatsink’s base by 1mm 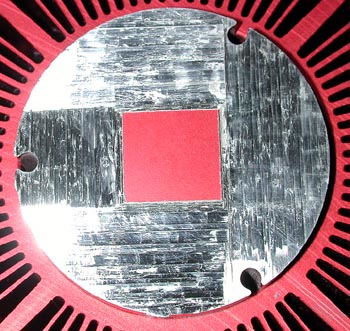 so that only a contact patch 14mm square contacted the center of the IHS. I ran Prime 95 again and recorded the following:

Some tantalizing clues as to what’s going on – sure does not look like it’s there for crush resistance only. I’d love to hear from Intel on this one!

No better than Intel

As a regular of Overclockers.com, I was really taken by Joe’s article on Copper CPU Spacers after my many years of using them and equivalent methods on all my projects. Joe covered in quite detail the “physics” on the heat

The following Emails from users are all we know right now on the Blue Durons. It does not look like they overclock any better than greens – we have many Duron 700s hitting 1 GHz+. The only difference in codes