This article describes the construction process of a 15 litre PC water cooling system using a passive (fan-less) copper radiator consisting of 27.3 metres (87.4 feet) of 20 mm (¾ inch) diameter copper tubing. The radiator is cooled by conduction from a 15 cm (6 inch) thick concrete garage floor. The water system cools a P4 2.2 GHz 400 FSB CPU to a temperature of 28 degrees Celsius (C.) when the garage air temperature is 19 degrees C. and the computer room air temperature is 21 degrees C.

Computer fan noise is something that most people do not want to live with. My computer originally had 4 noisy fans:

In an attempt to reduce the fan noise, I originally installed a cardboard CPU fan air duct. The air duct directed cool air from outside the case to the CPU fan and this enabled the RPM’s of all the fans to be reduced with rheostats, while achieving a cooler CPU temperature. The lower fan speeds created a noticeably lower noise level. 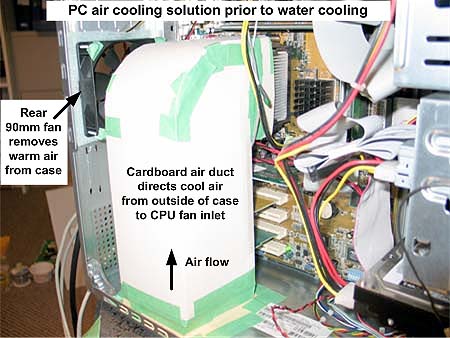 Table 1.0 shows the affect of the air duct:

The air duct definitely helped to reduce fan noise, but I wanted to reduce the noise level further or eliminate it completely, so water cooling was pursued.
{mospagebreak}

The primary objective of the water cooling project was to create a quiet PC by eliminating the CPU and case cooling fans. The secondary objective was to achieve an average CPU temperature of 30 degrees C or less, when the CPU is idling in room temperature. It was assumed that if the proposed water cooling system could maintain a 30 degrees C temperature with a P4 2.2 GHz 400 FSB CPU, then it would have the cooling capacity for a future and more powerful CPU, such as a 3.0 GHz CPU and for overclocking.

Since the main objective was to reduce fan noise, a radiator without a cooling fan was set as a design goal. After reading a few articles on the internet regarding passive radiators, it was concluded that a fairly large radiator was required.

Since the computer is located in a room adjacent to a garage, the decision was made to locate the water pump and radiator in the garage and use vinyl tubing to move the water to/from the water block in the PC.

When deciding on a location for the radiator in the garage, it was decided to place it on the concrete garage floor under an existing storage shelf. This seemed like an ideal location because the radiator would be unobtrusive and the radiator heat would be dissipated by conduction to the concrete floor.

The garage faces north with a second floor above – therefore, the exposure of the concrete floor to solar temperature gain is minimal. This is good because the cooler the concrete the better. There was no concern for the water in the radiator to freeze during winter because the garage walls are insulated, the garage has a thermostatically controlled heater and the garage is located in the mild climate of the Canadian West Coast. 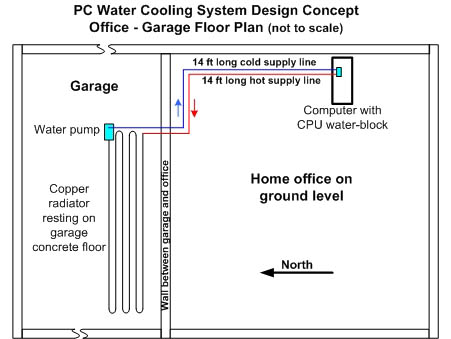 The water cooling system installed under a shelf unit: 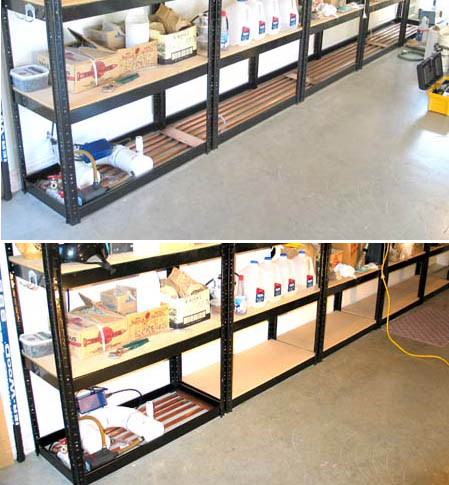 Three main components were required for the water cooling system:

A Swiftech MCW5000-P water-block and an Eheim 1250 water pump were purchased. The radiator required for the design concept was unique and was constructed by hand.

The radiator design was based partly on the “bigger-the-better” philosophy and partly on fluid mechanics calculations. No thermal calculations were done on the radiator. Its size was maximized to fill the space available under the shelf unit.

The completed radiator measures 4.6 metres (14.6 feet) long and 31.5 cm (1.4 feet) wide and uses 6 runs of tubing in a serpentine pattern. The total length of copper tubing measures 27.3 metres (87.4 feet) including the turns. The radiator was constructed from 3.75 metre (12 feet) long tubes of type L (hard) copper water tubing and all joints were soldered. Copper was selected because of its ability to conduct heat.

The radiator is longer than a Tercel: 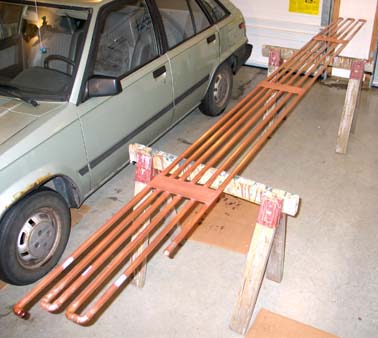 Three pieces of copper sheet were soldered to the tubing to give the coil rigidity. On a couple of the runs, 90 degree street elbows were used, rather than the regular elbows, in order to reduce the width of the coil so it would fit under the storage shelf. 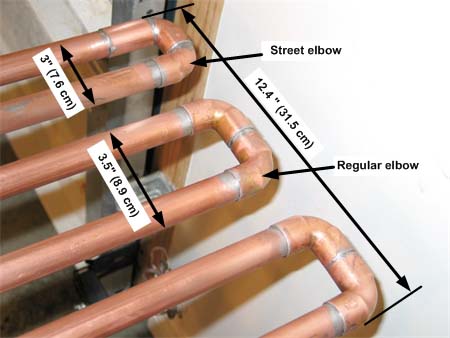 Friction head loss is important in water pump systems because it affects the flow rate and/or the size of the pump required. For example, the data tables found HERE and HERE show that a 100 foot long, ½ inch copper tube, type L, has a head loss of 2.45 feet for a flow rate of 1 U.S. gallon per minute.

The plan was to use 30 feet of Kuri Tec 13 mm ID x 16 mm OD (½”) vinyl tubing to connect the radiator in the garage to the computer in the office, and a pump with a 13 mm discharge connection was required.

An Eheim 1250 water pump was selected because it has a 13 mm discharge and a rated output of 1200 litres (L) per hour and a maximum delivery head of 2.0 metres (6.4 feet). The pump flow rate of 1200 L/hour (or 20 L/minute) is based on zero friction head loss. As tubing, elbows, hose barbs, and a water-block etc. are added to the cooling system, the friction head loss increases and the flow rate decreases.

After researching information on the internet regarding the Swiftech MCW5000 water-block, it was decided to design the system for a 4 L/minute flow rate. The Eheim 1250 pump curve shows that a flow rate of 4 L/minute corresponds to a friction head of 1.85 metres (5.92 feet). 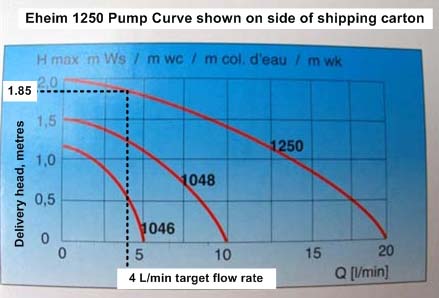 The total friction head loss for the complete system was estimated to be 1.8 metres (5.68 feet) – therefore the Eheim 1250 pump was deemed appropriate for the system:

1.5 foot vertical lift from floor to CPU in case

¹ Based on data tables found at Pump.net
½” copper tube data used for the vinyl tubing

When the system was finally completed, the flow rate was tested and determined to be 3 L/minute. It is not certain what contributed to this lower flow rate, but as reported later in this article, the cooling performance remains acceptable. 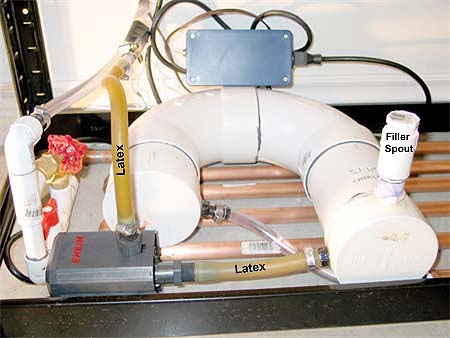 The pump vibrated more than expected. In order to reduce the vibration noise, the pump was placed on a 10 mm foam pad on the concrete garage floor. The pump vibrations were also transmitted through the vinyl tubing, and a slight hum could be heard in the office. The humming noise was eliminated by installing 13 mm (½”) ID latex tubing on both the intake and discharge ends of the pump. 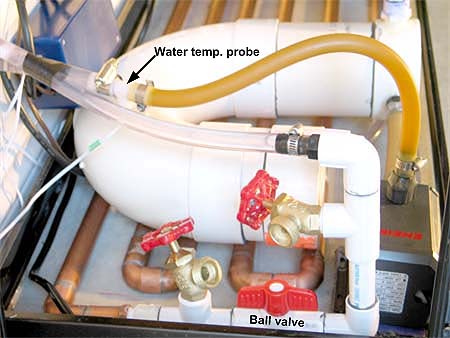 A RadioShack 63-1009A Indoor/Outdoor thermometer was used to monitor the water temperature and its probe was secured with epoxy into the shortened branch of a plastic Tee. 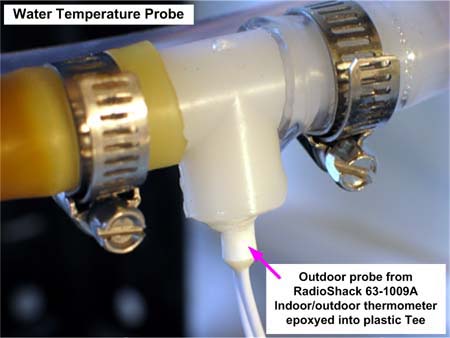 Research on the internet indicated that pump reservoirs make it easy to fill the system with water and purge the air, so a 5 Litre reservoir was built using 4″ PVC drain pipe, end caps and elbows. The PVC reservoir was glued together with PVC cement.

Plastic 13 mm (½”) hose barbs were attached to the reservoir by drilling a 19 mm (¾”) diameter hole with a hole-saw and then, after slightly sanding the threads down, the hose barb was forced into the hole using a socket wrench and a clockwise rotating motion. Epoxy was then used to make a water proof seal.

The holes for the hose barbs were specifically drilled in an end cap because the end cap covered the pipe. Therefore the hose barb penetrated 6 mm of material (3 mm for end cap and 3 mm for pipe). This combined thickness of 6 mm of PVC securely held the hose barb in place. This technique saved the cost of an expensive 13 mm (½”) pipe thread tap. 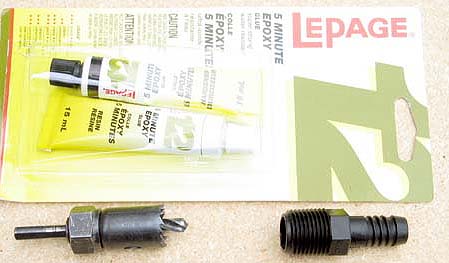 In order to turn the water pump on automatically when the computer starts, a 12 VDC relay was connected to a 12 volt drive plug inside the computer: 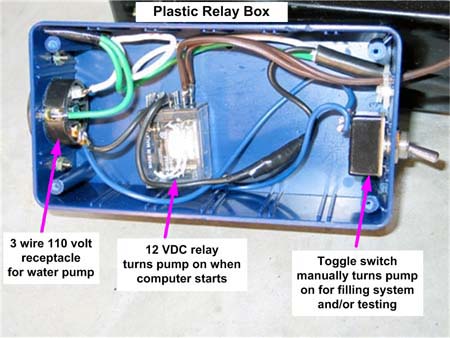 The Swiftech MCW5000-P was installed as per the supplied instructions with only one slight modification. A couple of wraps of vinyl electrical tape were placed around the retention brackets in order to increase the pressure force of the water-block against the CPU. This was done with the aim of improving heat transfer. 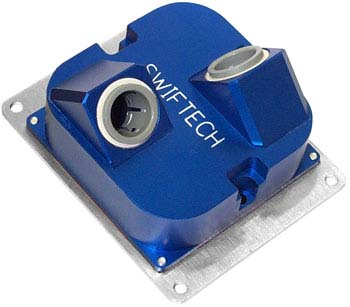 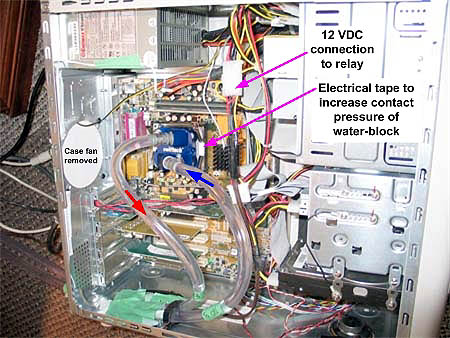 When the system was finally completed it held 15 litres of water.

All the system components in contact with water are either plastic, latex, copper, brass or anodized aluminum. This was by design, in order to minimize galvanic corrosion of materials. Also, distilled water is used in the system rather than ordinary tap water in order to minimize deposits and galvanic corrosion. Redline Water Wetter, a surfactant, was added (355 ml) to provide corrosion protection for the copper, brass and aluminum parts, and to improve the cooling abilities of the water.

The system was tested over several days (including a heat wave in the city on June 5 and 6, 2003) and the high CPU temperatures are shown for each day in table 3.0. During the tests, the computer was used for typical office applications – email, word processing, digital imaging, etc.

The test results show that the CPU temperature is 7-9 degrees C higher than the water temperature.

In conclusion, it appears both project objectives were achieved. The computer is very quiet with only the power supply fans turning at low RPM, and, on average, the CPU temperature will likely be 30 degrees C or less.