Welcome to my straight forward review of the third party Pentium III Heatsink/fan known as the Golden Orb, or “Majesty II”, as it seems to be called over here in the UK. 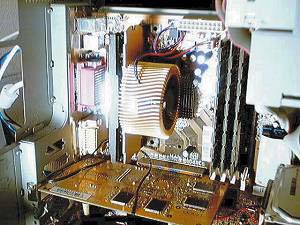 This heatsink is excellent for users who are lightly dabbling with overclocking. The installation is simple and easy, the improvements are noticeably significant, and the product is relatively easily available (especially for people in the UK). I’d recommend this product to anyone wanting to overclock their slot 1 Pentium III.

Before I got the Golden Orb, or “Gorb” as many people call it, I simply had the retail heat sink on the CPU and placed a 3″ case fan next to it. This had worked very well, but it wouldn’t cope under long periods of intensive CPU usage.

Finally, I found the Gorb in a local electronics shop and bought the thing immediately for £22. Over here in the UK, having something like this on the shop shelves is a miracle.

Now I’m not one to paint my underwear brown at a 1°C drop in temp, but I was extremely impressed with the results. The CPU was clearly a lot cooler. Ok, some facts (system specs at end of review):

Most impressive is the Gorb’s ability to cap the maximum temperature under stress at a mere 38°C. Compare this to the excessive 54°C of the old setup. The cool down time is also a lot faster; within 3 minutes of having just ran a 20 minute test, the heat sink was nice and cool again to the touch.

The figures are indeed impressive, but real world evidence is better. I can say that my system really has become more stable since getting the Gorb. “Hitman: codename 47” will no longer crash after long periods. The same is now true for “Quake3 Arena”. And all in all, I can honestly now claim 99.9% stability. Before now I’d laugh at anyone claiming something like that when overclocking, but it really is the case.

I expect many people are wondering why I’m not going on about how much more I can now overclock my CPU. Well, the sad truth is that I can’t. This is NOT the Gorb’s fault, it’s in fact related to the annoying reality that I have THE worst PIII 650. I’ve looked in the CPU database and all those people with my CPU serial number are stuck at around 800 MHz at best, mostly at around 700 MHz. For a 650, this is bloody lame. If I had a decent CPU (i.e. I didn’t live in the skanky UK where all the sh*tty cpu’s are sent) I’d be able to really test the Gorb fully.

Lastly, I’ll talk about the design on the Gorb. It’s a clearly well crafted heat sink. As you can just about make out in the picture, the fan air flow is being really used to blow all over the fins. It also helps to cool down that motherboard chip below (not that it needs it). The fan is also very quiet, as it uses ball bearings in it and the rpm actually ran at 4,800 compared to its officially rated rpm of 4,500.

But probably the thing which I like the most is that the Gorb has a thick core below the fan. That is, it isn’t just those fins attached to the plate; there’s a 1″ thick solid core at the base. Now what this does is to stop the CPU suddenly lurching into stupidly high temperatures. Very useful. The only downside is that once the heat sink is hot, it can take a while to cool down to the super cool temperatures it’s at on first boot. But ultimately it keeps the CPU temperature from being erratic which otherwise I would imagine will increase the chance of errors occurring.

I realise that the Gorb is nothing new and that there are far greater ‘hardcore’ heat sinks out there. But it is a perfect little gem for people who are not ‘that’ into over-clocking. It’s also a god send for UK’ers as it’s the only third party heatsink that I’ve seen on shop shelves. You USAers are blessed, I tell ya ! it’s like the dark ages over here – we still have pay to go online with modems you know.

*Pre-Gorb config was just the retail heat sink but with retail fan removed and a 3″ case fan put next to it.

SUMMARY: After trying a number of different methods, looks like the tried-and-true AMD/Intel method coupled with back of the CPU readings gives the best picture. I’ve spent the last two weeks immersing myself in heatsink testing methods. Andy Lemont at

After playing around with my air cooled Duron 700 for a while, I finally decided to close my computer case and finish experimenting. By then it was running quite stable at 1008 MHz under the max 1,92V my Abit KT7-R