SUMMARY: Lots of surface area with a so-so copper base but close to Alpha PEP66 performance – a good buy at the right price. 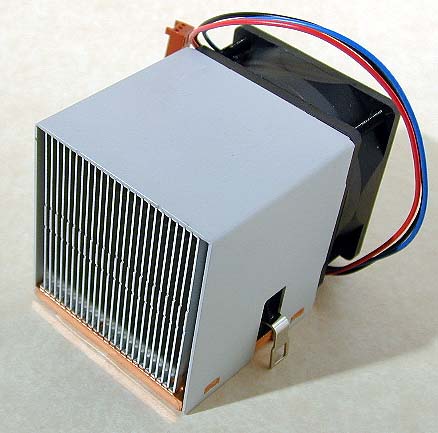 Dave over at Overclock Warehouse.com was kind enough to send us a sample of a very interesting heatsink the “Gen-X Tech OFRIO Super CPU Cooler”. As you look at it, you can see LOTS of surface area – I figured about 263 square inches or about 1.8 square feet of fin cooling area (including the sides, top and bottom). You also can see a copper base – not as well finished as an Alpha, but with some lapping, an effective base. 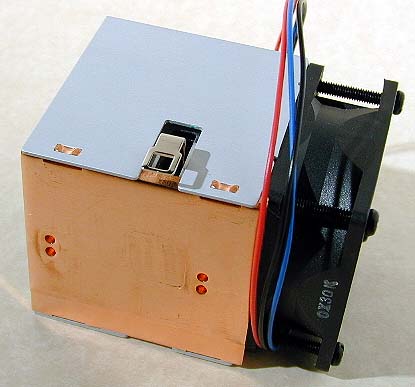 The clip is nothing to write home about, but it does its job. However, like many heatsinks, once it’s on, it can be difficult to get off in a case. The heatsink is a 2.5″ cube without the fan – add another inch for that. It will not fit on the ABIT KT7 with a 25mm fan; it just makes it with a 60 x 15mm unit; also does not fit the MSI K7T or Asus CUSL2. Overall construction emphasizes cost savings – not that it’s shoddy, it’s just not as well made as an Alpha.

All told though, a PEP66 contender?

To find out, I used a Duron 700 @ 900, 1.8 v, on the SOYO K7TA-B. This results in 43.9 watts from the CPU at load. I ran Prime 95 for about an hour and then recorded temps. I used an Omega HH23 Digital Thermometer with a thermocouple drilled through the center of the heatsink so it contacted the CPU; a second thermocouple was epoxied to the CPU’s back to record back temps.

Not bad! Clearly the Delta 38 does a lot for both heatsinks, but as usual at a price – VERY LOUD. In addition, the Delta 38 pushes enough air through the OFRIO that it makes a whistling sound as air rushes past the fins, so in addition to the usual Delta noise, you have another one. The ADDA 28 is much quieter in comparison. Dave tells me he will have a 30 cfm fan and that might be a very good performance vs. noise compromise.

I think this is an instance of brute force overcoming heatsink design deficiencies. For example, the aluminum fins are “dimpled” onto the copper base – not exactly the best metal to metal bond. The copper base is not well polished or particularly flat – lapping would be a definite improvement. I had to do some lapping to smooth over the thermocouple’s “exit wound”, so this may have helped performance a bit.

Overall, if you can’t get an Alpha PEP66, the “Gen-X Tech OFRIO Super CPU Cooler” is an OK substitute. It’s certainly a better choice than most socket A/370 heatsinks around. With more aggressive pricing, it could be a good price/performance buy.