Reeven seems to be making quite a splash. The company describes themselves:

REEVEN is a newly established international manufacturer of PC related products. REEVEN’s product lines includes the best quality of advanced CPU coolers, cooling fans, PC cases and many other items. The target of our products will be a wide range of audience under our philosophy “Professional Quality Gears”, for products that will withstand the highest demand.

So, they are offering a range of fans, heatsinks and cases to us enthusiasts. In this review we will look at Reeven’s Ouranos, which is Greek for ‘the heavens’ or ‘celestial.’ Does this heatsink provide ‘celestial’ cooling? Let us investigate. 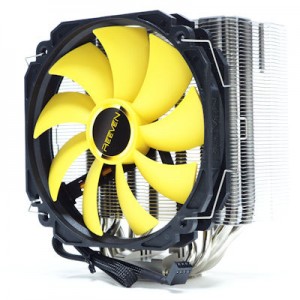 The Ouranos is a single tower cooler. It has a single 140 mm fan pushing air through it. The fan has a nominal speed of 1700 RPM. The heatsink comes with a low-speed adapter which reduces that to 1300 RPM. Reeven sells the fan separately as the Coldwing 14.

OURANOS is the CPU cooler with 140 mm quiet PWM fan, it is easy to upgrade to maximum efficiency with 2nd fan.

They don’t mention the fact that two of the heatpipes are 8 mm in diameter.

**Note that the static pressure conversion to mmH2O [in brackets] was added, not provided by Reeven.

Now, Reeven puts all of this on their website. The treats: the user manual and a helpful fan installation video are on the website as well. It even illustrates a problem you might have, and how to fix it, quickly, without words. Very nice, Reeven. Keep it up.

The Ouranos comes in a slick-sided retail box, covered with pictures, diagrams and print – a veritable treasure trove of information about the heatsink.

Open the box, and you find a smaller box of smaller parts. Remove that and you have the heatsink and its fan. You won’t inflict much damage on the base of the heatsink, since it’s covered with a sticky label. The fan cable has four wires, which tells you right then that it’s a PWM fan.

A side view of the Ouranos shows the 4-wire fan cable again, as well as giving us a good look at one of the fan clips. Let’s tilt it over and come closer so we can look at the heatpipes. The center two are Ø8 mm heatpipes with the rest are Ø6 mm.

A view of the fan through the fin stack shows us that the fins are not very close together and not too far apart. A close-up of the heatpipes show that they are encased by finstack material. The only way heat is going to get out of those heatpipes is through the aluminum of the fins. Is the fin stack’s grip tight enough to pass that heat through without any impediment? Our testing will find out.

The contact surface – you might call it the bottom – of the heatsink is mirror-like enough that you can see beams reflected on its surface. You can tell from the wing-nut’s reflection that the surface is not a perfect mirror, though.

Before we mount the Ouranos, let us see how much convexity it has. I have a simple rule here: The more convexity, the less time the heatsink spends on my CPU. The first picture shows just a little convexity aligned with the airflow, not too bad. The second picture shows the convexity crosswise to the airflow. Whoops! Too much. This heatsink will spend just the minimum amount of time on the CPU.

Now, this should mean nothing to you. A reviewer’s problems are not your problems. If a heatsink’s bottom is well-curved, it’s a problem for me: I have to reuse that CPU for a number of heatsinks. But for you, if you use a heatsink with a mild convexity (and the convexity here is mild), it gets you better cooling. If your CPU and the heatsink conform to each other, you get better contact. This is a good thing.

We can see the speed reducer (an accessory), four “silicon” (silicone rubber?) washers and the backplate sitting on the manual. The rest of the first picture shows the small parts – going counter-clockwise, the LGA 775 spacer (a sticker), two fan clips, a tension screw, a tiny wrench, another tension screw, four through-shafts, the mounting bar (no slots on this for sliding screws), two nuts, two more fan clips and a small package of TIM. You must cut that open with a pair of scissors. Inside the mounting bracket we have the four LGA-2011 spacer/screws, four regular spacers and two nuts. What makes this interesting is that some manufacturers provide slots on the mounting bar to accommodate Intel and AMD. Here, the AMD through-bolts and spacers attach in different places on the mounting bracket, allowing for invariant tension screw positions. See the manual for details. Good Design.

In the next picture we see the “silicon” washers in action. The through-shafts have cams on them to prevent their turning. The rubber washers squeeze on and hold them in place. The washers also hold the backplate away from the motherboard and cushion it.

Having put together our backplate assembly, we stick it up through the motherboard. While you hold it in place, you pop on the spacers. You then screw on a nut or two. That will hold it so you can screw on the other nuts. The manual shows you how to lay down the mounting bracket … three separate times. They want you to get it right.

The Ouranos attaches itself with a torsion pressure. No springs. Take a close look at that steel. The mounting bar is grooved not to bend and the mounting bracket has thick steel. Combined with the marked convexity, this heatsink has the potential for putting a lot of pressure on the center of the CPU.

Reeven provided the Ouranos. The other comparators were provided by their respective OEM’s, except for a Prolimatech Megahalems, which was purchased retail at the end of 2009, and a Prolimatech Genesis and a Noctua NH-D14 SE2011 both purchased retail at the end of 2013. Each heatsink was mounted on the night before testing. This gave the TIM most of a day to do any migrating it was going to do.

Linpack runs in surges. When the temperature is graphed, you see ragged plateaus. In looking for cooling solutions, you want to know how well a heatsink cools those plateaus. So the temps under 70 °C (the valleys) are ignored in analyzing to core temps.

Each test run was 30 minutes in duration. The last 20 minutes of each run was measured, and the core temperature logs were analyzed in Open Office spreadsheets. An Intel chip reports its temps in one degree increments, so for best accuracy these reports should be averaged in aggregate. Here the core temps were measured once a second, resulting in 1200-line spreadsheets. Three test runs were averaged.

The digital thermometer measuring air temp reported its measurements in increments of 0.1 °C. The ambient temperature was measured every five seconds, resulting in 240-line spreadsheets. The mean ambient temp was subtracted from the mean core temps, resulting in a net temp for each run. The net temps were then averaged.

Results of Testing the Ouranos

The Reeven Ouranos was the best cooler tested in this rig: 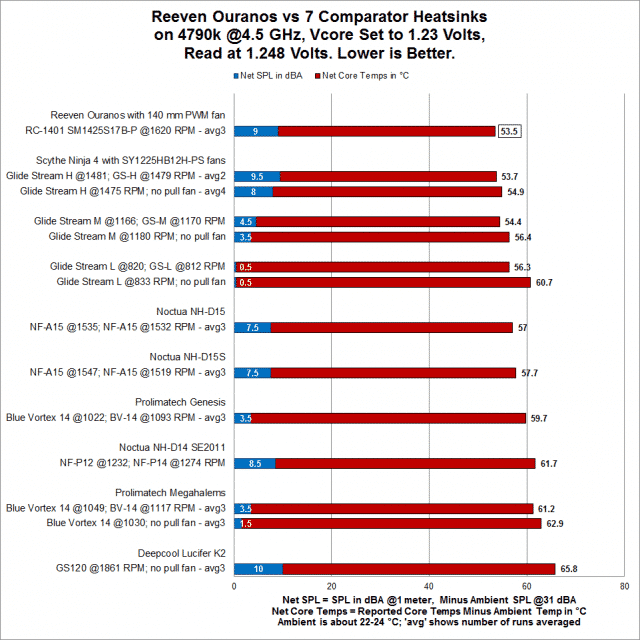 The question one must ask is “Why?” This was no fluke. What you see is the average of three runs. I did one interesting thing: I held my hand downstream from the heatsink. The air was hot! Since I record the ambients for these runs, I know that the ambient was 22.4 °C, which means the air flowing out from that heatsink was more than 75.8 °C! So yes, it was doing its job. We must conclude that the convexity was just right to transfer heat, the heatpipes had a really good contact with those fins, and that the thickness of those fins and their spacing was just right. Let us not forget the two Ø8 mm heatpipes. Whatever the engineers did at Reeven, they did it right. 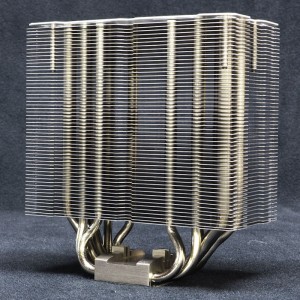 The Ouranos is one great heatsink. It is a single tower heatsink and still, it does a great job cooling. It seems that single tower heatsinks are making a comeback. First, the Noctua NH-U14S has been doing as well as the tandem tower heatsinks in some reviews. Then, the Noctua C14S with heatpipes oriented vertically did amazingly well. Next, the Scythe Ninja 4 beat the tandem tower rigs in my review. Now the Reeven Ouranos beat even that. I am putting the D15 and the D15S on my rig between test runs for other heatsinks, and they are cooling as well as they always have. I am testing my overclock to make sure the system is making just as much heat as it did for the other heatsinks. No doubt about it: the Reeven Ouranos is one devil of a heatsink. It pours out the heat.

The heatsink bottom, the contact surface, is a little convex. This is more of a problem for me than it is for you. The mounting bar is loose, but without slots for the tensioning screws, the mount is OK. It could be easier, but it is OK. 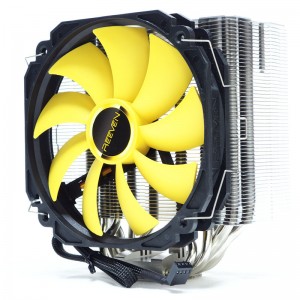 Scythe comes in bringing yet another revision of its acclaimed Mugen 5 heatsink, the Mugen 5 ARGB Plus. This time the changes are mostly cosmetic in the form of an ARGB top cover and two ARGB Kaze Flex fans. However, this revision does use two fans instead of one, and the ARGB fans have a higher speed rating. So, there is potential for increased performance as well. Read More

Intel is bringing out its Intel i7 Broadwell-E. What coolers and heatsinks should you use for one of these beasts? The Intel i7 is a Broadwell-E on a 14nm process, with a TDP of 140 watts. The chip will arrive with options for 10, 8 or 6 cores. Joe Shields (earthdog) has done a review of one of the Broadwell-E chips and associated motherboard. This summary will review some of the coolers you should consider for your new chip. Read More

Whether they are for HTPC’s or simply for taking up less room on the desktop, products designed for slim form factor cases are in high demand. CPU heatsinks for cases like this typically blow air down on the motherboard, cooling not only the CPU, but the various components on the motherboard as well. Noctua has responded with five down-blowing CPU heatsinks. This review will focus on the middle model, the Noctua NH-L12. As usual for Noctua heatsinks, it is designed for flexible fan mounting. The fans are controlled by your motherboard through silent PWM circuits. Read More