Being primarily a DIY-er website, it pains me to say this but sometimes a factory-built machine like the Sapphire EDGE Mini-PC HD2 has its advantages. This HTPC is tiny, about the size of a consumer router or eBook reader. This review will explore whether great things really can come in small packages.

SAPPHIRE EDGE-HD2 is a fully featured PC for home, education or business use. Specifications include a second generation 1.8GHz dual core processor, 2GB of DDR3 memory, a 320GB hard drive and built in wireless connectivity as well as high speed LAN port and four USB ports. It provides high resolution graphics output with a full HD (1920×1080) HDMI interface (with an HDMI cable and HDMI-DVI adapter also supplied) as well as a VGA monitor output and it has built-in audio with mic-in and line-out sockets.

The package arrived in good condition with no visible damage to the box. All of the impressive features outlined above are listed on the front or back of the box. This model is clearly marked with a large “Microsoft Windows Included” sticker, meaning it’s ready to go right out of the box. On the back, there is a size comparison between the nettop and a human hand. The actual size of this product is finally starting to sink in after seeing that photo and the overall dimensions of the box, which is about the same as a standard PSU box (though slightly less deep).

Opening the box reveals the Sapphire EDGE HD2 Mini-PC and “mini” is an understatement. It’s just about as large as my hand. Removing the lightweight HTPC and packaging exposes all the accessories, which actually take up more space than the nettop itself.

Below are all the accessories (from left to right) including power cord, HDMI to VGA adapter, HDMI cable, manual, driver CD and some nifty stickers. Some readers with keen vision will notice the power adapter is a little strange because initially I received a European model. It was quite disappointing not being able to plug in the HTPC right away, but Sapphire promptly corrected the situation. If you order a U.S. model, you will receive the proper power cord.

Directly below the photos of the accessories is an image of the included mounts. Using both simultaneously could lead to major confusion since they are not meant to work together. The mount on the left is a stand to place the unit on a table or TV stand. The mount on the right is a VESA mount, which allows users to attach the unit to a compatible HDTV.

Finally moving on to the HTPC itself. 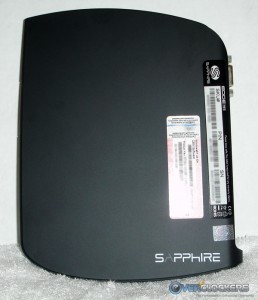 Notice the small rectangle on the front of the unit, that actually hides two USB ports. I only realized that after about booting up five times, since it hides the front ports so well. On the back, all the necessary IO functions are included, like VGA, HDMI, two USB ports, network, power, speakers and microphone.

Let’s tackle the price/performance question and see what you really get with the Sapphire EDGE HD2:

My first priority was to dig into each model and compare specifications. Right off the bat the Sapphire EDGE HD2 Mini PC has a very distinct advantage in more storage space. That extra 70 GB will certainly come in handy when storing movies and music. Sapphire also threw in an HDMI cable so users really can enjoy the ideal media experience right out of the box.

The EDGE HD2 is not a complete all-in-one solution though, users will need to supply the standard mouse and keyboard or media center remote (and of course the 1080p HDTV monitor). On the contrary, all three competitors include input devices, even wireless on the Acer model for that real couch potato experience. Any wireless black or silver keyboard/mouse combo (which start at about $15-$20 on Newegg) will work. However, I highly recommend splurging for a media remote, like the Lenovo Wireless Multimedia Remote, to save space on the coffee table.

Speaking of space-saving, the Sapphire EDGE Mini-PC HD2 is tiny. It weighs less than a novel and is approximately the same length/width of an eBook reader. This unit weights the least, albeit it by only a few ounces. It is also only .02″ from the thinnest of all the models being compared. These are important considerations for me with very limited space in my New York City apartment.

Different accessory packages do not account for the large $110 pricing variation between the most and least expensive HTPC above. The difference in cost between 250 GB and 320 GB capacity drives is negligible. It seems like the only additional cost for Sapphire is Windows 7 Ultimate, which costs about $85 more than Windows 7 Home.

This decision totally perplexes me, Windows 7 Ultimate is completely overkill for a media center PC. Also, why install 32-bit when a 64-bit OS is available? It’s the same price. Anyways, Windows 7 Ultimate has a ton of extra networking and drive encryption features. Also, many language packs are available. Perhaps this allows Sapphire to sell this all over the world? If that’s the reason, engineers probably should have included Windows 7 Home Premium and set the MSRP at $85 less in the USA. Maybe this is American arrogance and stupidity, but I’m guessing the States comprises Sapphire’s most competitive and largest market. There is a version of this nettop without OS for $330, which might be a more attractive option for users trying to save a few bucks.

Based on the above analysis, it is evident that the specifications of the Sapphire EDGE match up with the competition for the most part. This means that the one of the main differences that needs to be addressed is the size of this nettop. Again, without the competitors’ products there is no way to do a direct size comparison so instead let’s see how it stacks up against some common household items (common in a geek’s house at least).

The photo on the left shows the Sapphire EDGE and a universal remote that came with my cable service. The remote is both taller and thicker than the Sapphire EDGE. On the right, the HTPC is being compared to an Amazon Kindle eBook Reader. Both devices are just about the same size, though the EDGE is slightly thicker and weighs more. Pretty impressive to say the least!

Not all companies were quite as generous as Sapphire, so this performance section will not include results from the above competitors. Let’s face it, the hardware and software is almost identical, they will perform nearly the same. Instead the Sapphire EDGE HD2 Mini PC will be up against some DIY media boxes from our very own Overclockers.com Editor, Splat. His results were grabbed from previous HTPC/mini-ITX motherboard reviews:

Right off the bat, let’s get a few things straight the OS varies between test systems which will affect results slightly. Additionally, the Phenom II 560BE is a lot more powerful than the Atom D525 (heck, it’s 3.3 GHz vs. 1.8 GHx), so performance will be quite a bit different. With that in mind, first order of business is to examine the synthetic benchmarks (including some HWBOT favorites):

In all of these tests the Phenom II chip flexes its muscles by outperforming the EDGE HD2 by about 60-80%. Based on the additional onboard cache and about 80% boost in clock-speed on the Phenom II compared to the EDGE HD2, the results are not at all surprising. Had performance been equalized based on clock speed, we’d probably see a much closer battle, which means the architecture of the Atom chip is pretty solid relative to budget AMD CPUs. Would a user be better off with an HTPC based on an i3/i5 or Phenom II? Absolutely. But would it be as compact, stylish and easy-to-use right out of the box? Not even close!

Without further ado, let’s take a peak at 3d performance (spoiler alert – this is where it gets interesting):

Test Methodology: All Sapphire EDGE HD2 tests were run once. Total scores are listed alongside each bar. All of the Sapphire EDGE HD2 results are normalized to 100%. The X Axis shows the relative performance (based on %).

The Sapphire EDGE’s NVIDIA ION2 crushes the system with the older onboard nForce 6150SE GPU. Results from the 890GX are a little perplexing. I am surprised that it did not crush the Sapphire EDGE in both tests. My conclusion is that when it comes to onboard graphics, the NVIDIA ION2 seems to be able to keep up with other current generation integrated GPU solutions. Unless you plan on gaming or video editing, the NVIDIA ION2 can handle just about anything you throw at it, including 1080p video. Testing an HD movie using FRAPS (a program that records FPS while gaming) showed flawless playback and no dropped frames.

With the temperature topping out under 50 C load, immediately my thoughts turned to overclocking. On a side note, I bet the temperatures are being helped by the airflow gills on both the top and bottom of the unit. After downloading SetFSB, I spent about an hour searching for the correct PLL clock generator and motherboard specifications. My searches led me nowhere, except I did discover the motherboard brand, Pegatron is actually an Asus company. Who knew? No overclocking for me, maybe a new BIOS or the proper PLL clock generator code are floating somewhere on the web. (COUGH, COUGH – readers please help me!)

There are very few instances that warrant recommending a retail or factory-built system over a DIY machine, but this is one of those rare occasions. It is easy to endorse the Sapphire EDGE HD2 Mini PC as it’s barely bigger than an eBook reader. This nettop will easily fit in between an HDTV and cable box, requiring less than an inch of space. Building your own HTPC can be expensive and time-consuming. It can be frustrating fitting tiny screws and jamming parts in those little cases, so if you are impatient like me, the Sapphire EDGE might be a good option.

Relative to other HTPC’s the price tag is rather high at $400, but all of the must-have media box essentials are included, like HDMI output, 1080P playback and of course WiFi to watch YouTube or Hulu. For less than the cost of this unit, you can purchase other pre-built options  with similar specifications  or even build your own with AMD’s new Fusion APU, which is why I suggest purchasing this unit without Win7 ($330 MSRP). There is a version of the Sapphire EDGE that comes with DOS, so you can put Ubuntu, Overclockix or a different version of Windows if you are inclined.

Take it for what it is, this PC is not built to be a photo-editing machine or a home workstation. For HTPC purposes, it has all the performance one would need and then some. When looking for a sleek and powerful all-in-one HTPC solution, the Sapphire EDGE HD2 Mini PC should be at the top of the list.

Today we present to you a new company, Steiger Dynamics. They are bringing a whole new level of PC to home theaters. Read More

My HTPC was just too darned LOUD for me to enjoy the system, so I decided to look around for ways to quiet it down some…I found the Scythe Musashi. Read More