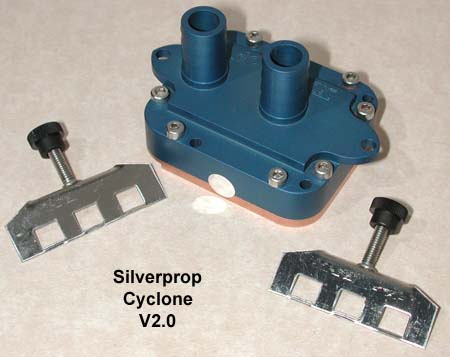 Silverprop was nice enough to send a Cyclone Evolutions V2.0 waterblock to test. 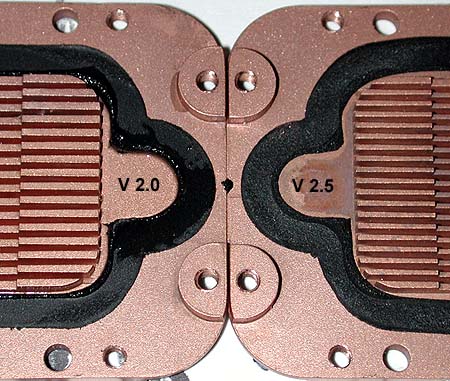 If you look closely at the two, you’ll note that there are more, but thinner, fins for the 2.5 than the 2.0. However, if you measure the gaps between the fins of both bases, you find that the channel width is the same on each block; ergo, there is less space for water flow in the 2.0 (15 channels) compared to the 2.5 (18 channels).

I bring this up because I found pressure drop for the 2.0 to be slightly higher (0.73 vs 0.65) than the 2.5 – reverse of what I expected based on the description cited above – now I know why. 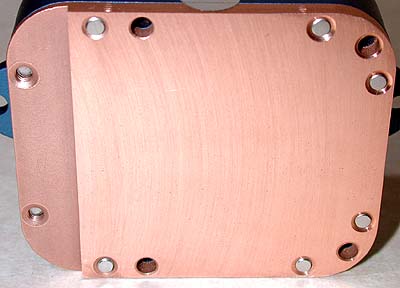 As with many waterblocks, I found that reducing flow to 0.5 gpm resulted in more of a performance decrease (about 1ºC) than the gain by increasing flow to 1.5 gpm (about ½ºC).

Silverprop’s Cyclone V2.0 Evolutions Waterblock is a good choice for CPU cooling. Flow resistance is a tad on the high side, although the Cyclone Evolutions will perform very well with moderate power waterpumps (300 gph), as long as other components do not unduly restrict waterflow.

There still isn’t a Canterwood I would buy quite yet. They’ve all run into some sort of problem. Right now, the best place to go to see how the Canterwood pioneers are doing is over at the Asusboards.com Forums. The

Daily Tech has an AMD roadmap extending through 3Q 2007. In its own way, it’s rather gruesomely stunning. If you thought AMD was going to throttle up to match Intel’s Conroe, forget about it. By the end of the third