Silverstone has been in the fanless PSU market for well over 8 years. So how have things changed since then? Is Silverstone still a worthy option for fanless PSUs? We’ll find out with a detailed look at the Silverstone Nightjar 450 W, which is not only fanless but also designed for mini ITX cases. 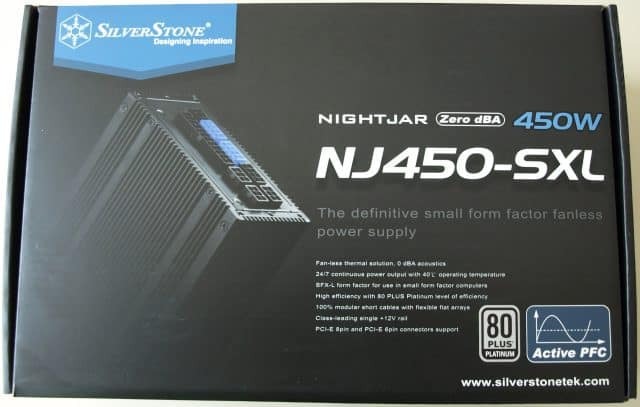 Not having a fan makes the thermal design much more of a challenge with the small size making things more difficult still. Therefore, it’s no surprise to see that the designers targeted an 80 Plus Platinum efficiency level to ensure less heat is created in the first place. 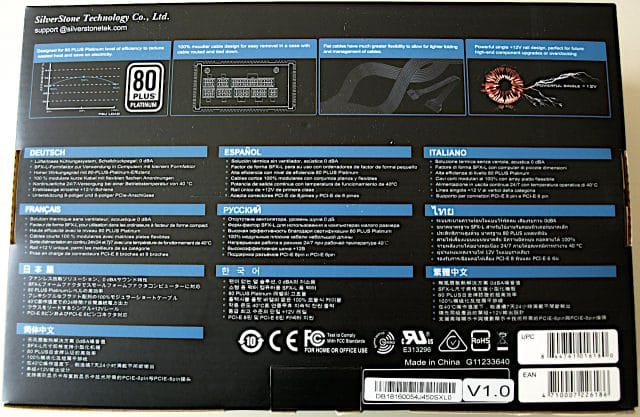 For those interested, the Silverstone website has a few more specs like power density at 436 W/L, but all specs that a user is likely to care about are already on the box. Opening the box, we find the PSU itself under some foam padding and a smaller box with the cables. 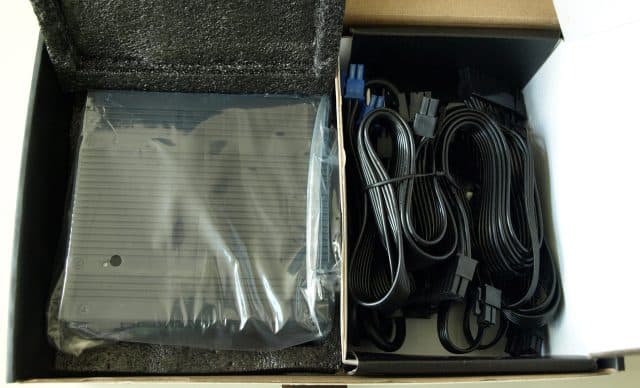 The cables are as follows, all removable:

Although it is normally not useful for the ATX cable to be removable, in a mini ITX system where space is at a premium, it opens the possibility of having a custom cable to exactly fit the case. The EPS12V cable being removable is even more useful since there are few fanless PSUs available for mini ITX cases and therefore it’s reasonable for such a PSU to get used in a PC that doesn’t have an EPS12V connector. What puzzles me is why they included GPU cables that exceed what the PSU is capable of supplying: four 8-pin connectors for a total of up to 600 W. My best guess is the cables are also used on their larger PSUs and it was cheaper to just use those instead of manufacturing a different kind just for the smaller PSUs. The generous spacing on the SATA cables can make them hard to fit into a crowded case, so I would have preferred to see one plug at a generous spacing for an optical drive and the rest spaced just right for a stack of 2.5″/3.5″ HDDs.

The back side has the AC input and the service switch. Since there’s no fan to give an indication it’s running, I would have liked to see a LED just like on the older version. (Not too bright, however; a diffused green LED would be ideal.) There’s also the specification label. 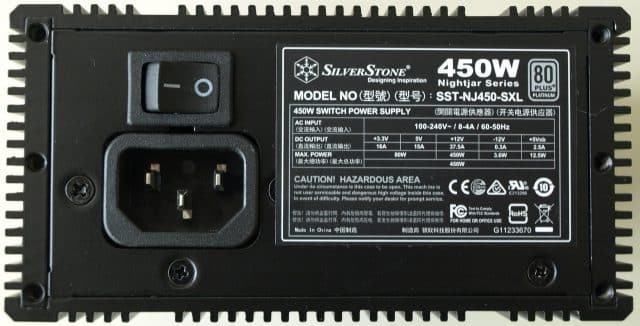 15 A on the 5 V is normally on the low side, but this PSU is intended for a mini ITX system that generally has fewer USB ports and SSDs than larger PCs. 37.5 A on the 12 V is plenty for virtually any silent PC, even more so after accounting for the inherent thermal limitations of a compact build.

The front side has the DC connectors with the optional ports capped. 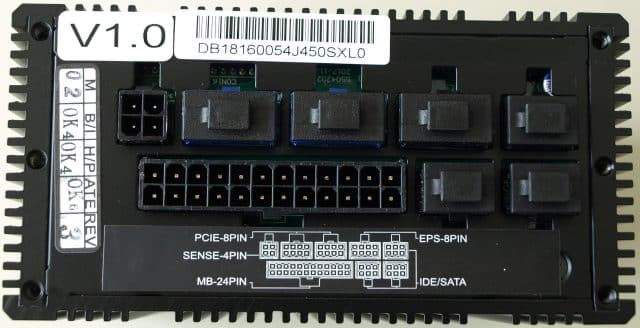 Since there’s no fan, the other four sides of the PSU are covered in heatsinks. Here we see the big flaw with an otherwise great idea: as designed, the PSU gets the best cooling when either the front or back side is facing up, which is a very unlikely orientation in practical use. Turn the fins 90° and the cooling will be much better in the horizontal or vertical orientations it will likely be used in. 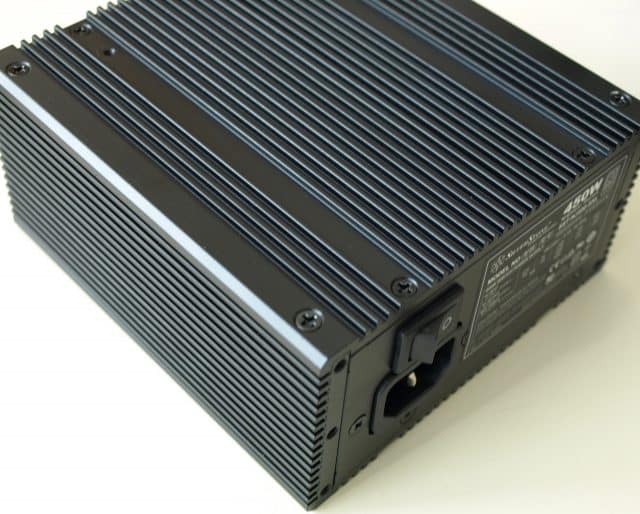 Tearing down this PSU took a lot longer than usual thanks to its unusual construction. That, along with the usual high voltage hazards, is a good reason to leave the teardown to an experienced engineer. The first thing we see is the heatsinks that make up the sides, top, and bottom of the enclosure, complete with thermal pads to couple them to the electronics. 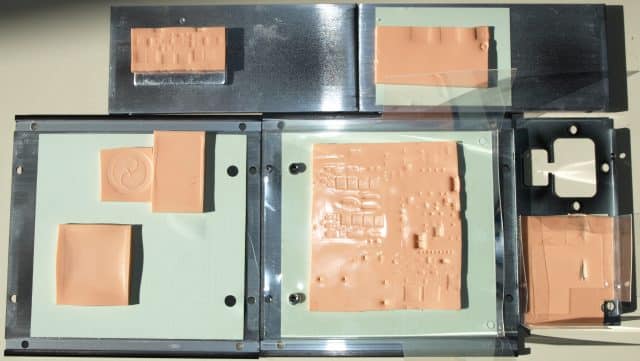 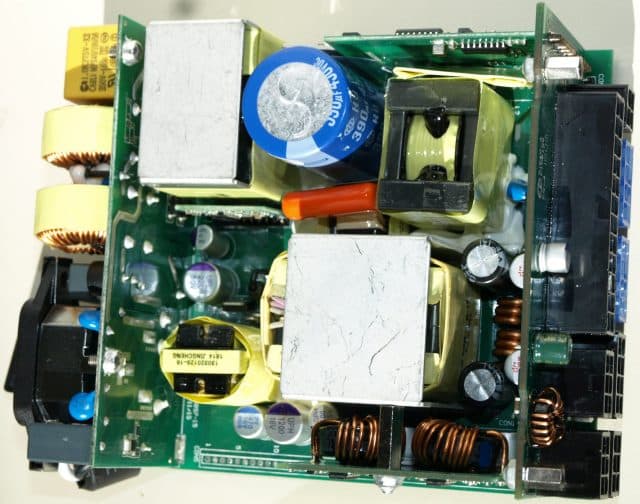 The AC input board has plenty of filtering and doubled up bridge rectifiers. The white wire on the switch suggests it’s switching the neutral, a fear confirmed with a quick multimeter check. Any competent electrician will give a lecture on why a switch in the neutral is a bad idea, but one reason that is easily overlooked is that when the switch is in the “off” position, the entire stray capacitance of the PSU will appear as leakage to ground. That, in turn, can cause really confounding problems with GFCIs/RCDs such as tripping when the switch is turned off or increased sensitivity to noise due to the added capacitance between hot and ground. 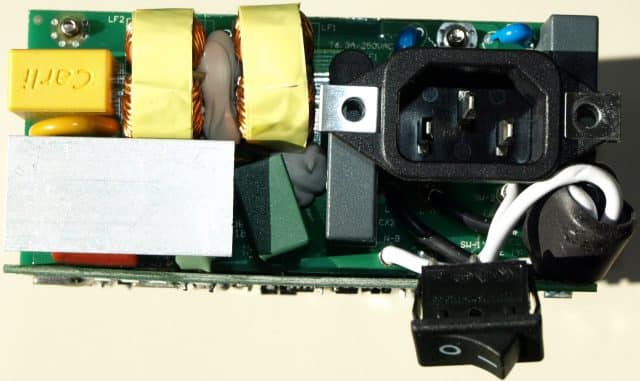 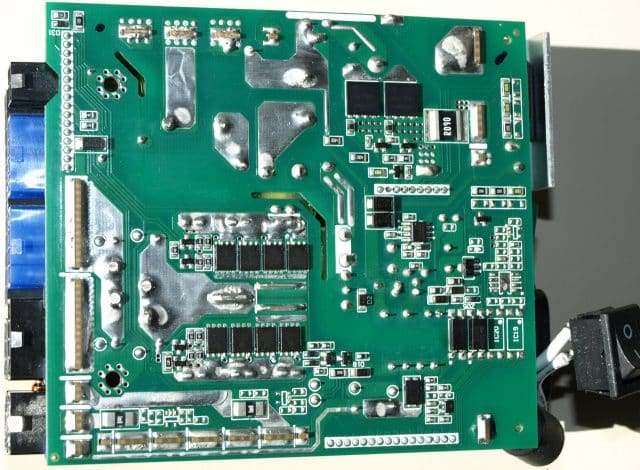 The main PWM is based around a CM6901 PWM controller, a SI8230BD dual gate driver, and two IPP50R140CP MOSFETs in a half-bridge topology.

A PS223 handles the protection. Also visible are several capacitors for ripple reduction and an inductor for the 5VSB rail. 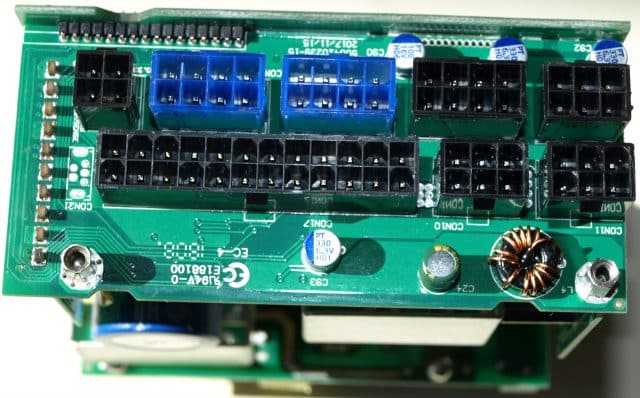 The standby power usage is extremely good at 0.07 W. Measuring the idle power usage proved difficult because the PSU very aggressively period skips at no load, causing the reading to bounce between near zero and around 7-10 W. Some data collection using the Mooshimeter eventually extracted a very good average of 3.8 W.

Under load, the efficiency measures excellent, exceeding 90% at about 150 W of load.

The ripple measurements are excellent as well with 5.97 mV on 12 V, 3.88 mV on 5 V, and 7.37 mV on 3.3 V. Of particular note is the exceedingly low ripple on 5 V, since USB devices such as external sound cards are powered from that. That’s great news for recording studios where minimizing electrical noise is just as important as reducing acoustic noise.

The thermal images show that most of the losses are in the PFC MOSFETs and voltage regulator inductors.

Priced at $190 (Amazon), the Silverstone Nightjar 450 W is among the most expensive 450 W PSUs out there. However, there’s also very little in the way of fanless PSUs for mini ITX cases with the nearest competitor being PicoPSU, but that’s also considerably lower power. With that in mind, having so few options, a price premium was almost a given.

Efficiency is excellent, it’s silent acoustically, and extremely quiet electrically. Silverstone even went through the effort of using digital PFC with aggressive period skipping to raise the efficiency at low power levels where silent PCs tend to operate at. Where it matters, it’s almost perfect. Definitely a top pick for use in a recording studio or anyone who wants/needs silence 100% of the time.

The selection of components is decent, but there are a few minor design flaws like the heatsink fins facing the wrong way and the switch switching the neutral. A few build flaws like the soldering quality also warrants that Silverstone review their manufacturing process.

All in all, it’s an incredibly niche product. Most users looking for silence can get better value with a PSU that has a fanless mode, but isn’t always silent either. Small size and silence are goals that tend to run counter to each other. But, if a compact fanless PSU really is the best fit for your use, the Silverstone Nightjar 450 W pretty much gets it right.

The Cooler Master MWE series was announced back in June of this year promising to deliver 80 Plus Gold level efficiency while not breaking the bank. Is the MWE line still a good choice in the low to mid-range segment? We take a closer look below and find out. Read More

One of the first stops was Zalman, who showcased over 120 products including everything from coolers, cases, video cards, power supplies to desk lamps. Read More

Silverstone has been around since 2003 and have a sizable stake in the PC chassis, power supply, CPU cooler, fans, and accessory markets. Personally, I was first introduced to them as a top tier PC case manufacturer, and I still have and use some of their older cases such as the PS07, TJ08-E, and the TJ07. However, we have one of their all-in-one liquid CPU coolers up for testing, the PF360. The PF360 is a large 3×120 mm CPU cooler featuring addressable RGB on both the fans and pump/block housing. Read More