Form and Function, a very well made case – Brian Berryman

SUMMARY: Form and Function, a very well made case. 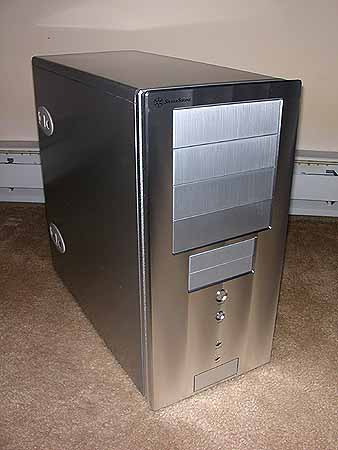 The good folks at SilverStone were kind enough to send one of their SST-TJ02 “Glacier”
mid-tower cases to take a look at.

From design, to assembly, all the way to packing and shipping, there are a lot of very nice details with this product. Over the next few pages, we’ll take an in depth
visual look at this case, inside and out.

One of the big selling points of this case is a completely toolless design. Completely, other than a motherboard swap, or until you have reason to disassemble it
to it’s last component. For all intents and purposes, during normal usage, it is indeed toolless.

Some components are held in with thumbscrews, and all drives are held in place by a very clever locking mechanism (no drive rails).

The case has a very elegant stying about it. The front bezel is a beautifully machined piece of aluminum, that gives the front of the case a three dimensional look as the light strikes it.

The drive bay face plates are also aluminum, with a “brushed” finish. They contrast quite nicely with the machine work on the front bezel. The power and reset buttons are made from aluminum as well.

In fact, most of the items that are plastic on the majority of cases are made of aluminum on this one actually, which gives this case a feeling of quality about it.

This does add to the weight of it slightly, but not too much. It’s only slightly heavier than the average mid tower case.

Ready for the “scenic tour”? Great…off we go! 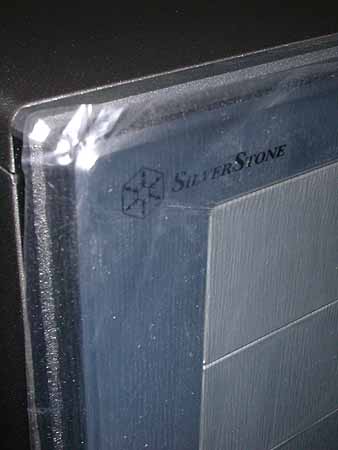 The front bezel is covered with a protective sheet of plastic for shipping.
A good closeup of the bay plates.
The power buttons. Some of the excellent machine work is visible in this picture.
Not one, not two, but FOUR USB 2.0 ports! (plus audio and one Firewire port)

Also note the air intake openings here. I’ll refer back to them later on.

Exterior, continued
No power supply is included with the SST-TJ02

Several noteworthy items are visible in the pictures above;

The side panel is secured with thumbscrews, as well as a pair of sliding latches, one of which is lockable (keys are included inside the case). The panel is a very
tight fit, and at first is a little difficult to remove. A handle is stamped into the rear edge of the panel to assist in removing it however.

The opening for a rear exhaust fan is designed to accommodate an 80, 92 or 120mm fan. This fan does not come with the case, however, a 120mm fan is installed in the
front intake opening.

It’s nice to be given the option on fan size without having to break out the power tools.

This case comes with a standard I/O plate, but is removable if your motherboard uses a different port configuration. This case also features expansion slot
cover plates, rather than knockouts.

The paint job on the panels is a metalflake silver, and is pretty good. There is a slight touch of “orange peel” visible, but the only reason I’d notice this is the 15+
years in the automotive industry I’ve got…my eyes home in on stuff like this. Most people wouldn’t even notice it. 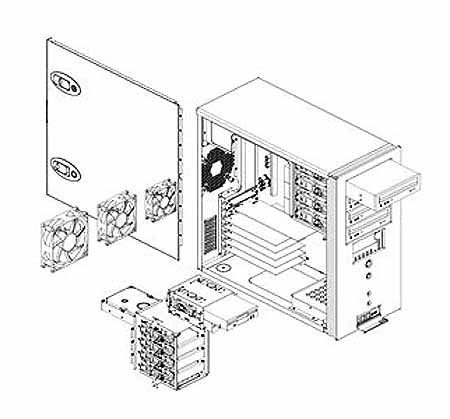 The inside of this case is very well designed. Let’s have a look…

This struck me as kind of funny…let’s look in that small brown box;

For a “toolless” case, this sure comes with a lot of screws…=P

Also in the box are the keys for the lock on the side panel, a pair of small zip ties, some fiber washers, and some motherboard standoffs. The system
speaker is also found in here.

Also included is a diagram of the front access port wires, to assist plugging them into the motherboard.

Not in the small box, but included, is a very nice manual. Printed on a very heavy, almost parchment type paper.

Let’s take a look at those drive locks next (CD bays shown, all similar);

Before installing any exterior drives, you must first remove the bay faceplate, which is secured by a single screw. For the first bay, this would be the second screw
down from the top as seen above.

The way these lock the drives in place is rather ingenious. Start by pushing the white plastic slide (#1) towards the back of the case (in the direction show by arrow #2).
This forces a pair of metal tabs outwards (#3, and along the right side under the topmost screw).

Next, push the slide back forward again (shown on the next lower drive bay as #4 for clarity. These steps would all be carried out on the same drive bay). This pushes those
two metal tabs back inwards. On the back side of each of them, is a metal nib which fits into the drive mount screw holes. Finally, lock the drive into place by pushing the
lock tab up into the “Lock” position. (#5, again shown lower for clarity)

A complete assembly manual identical to the one included with this case may be found online here.

As I mentioned last page, there are screws included for mounting drives. Along the bottom edge of the blue plastic pieces pictured above are holes for physically screwing
the drives into place if desired. The toolless locks hold them quite securely, but it’s nice to have the option, especially if you move the case around a lot.

The hard drive cage is held in place by a pair of thumbscrews, and slides out to the side.

The floppy drive cage above it is one of the few items you will need a screwdriver to remove, out of the box. It’s held in by a pair of standard case screws. There’s really
no need to have to remove this, but if you ever did, you need to remove the 3.5″ bay faceplates first

The floppy cage can be made toolless, by not using the screws when installing it. It’s also retained by a push type latch mechanism, visible above.

With the drive cage removed, we can now see the installed 120mm intake fan.

I thought it somewhat odd to route half of the case wiring through one side, and half through the other. When I removed the front bezel (next page), I rerouted all of the wiring
through the opening on the left side of the picture above when I reassembled it.

Doing this reduces the length of the front access port cables slightly, but as seen earlier, they’re plenty long enough to reach anywhere on the motherboard to get plugged in.

While you really shouldn’t need to remove the right side panel, if you wanted to, it is a one piece unit that includes the top panel as well. To remove it, start with the five
screws on the rear of the case.

Then remove these two very small screws at the top edge of the left side panel opening.

The right side/top panel is then free to slide back slightly, and lift up and off. 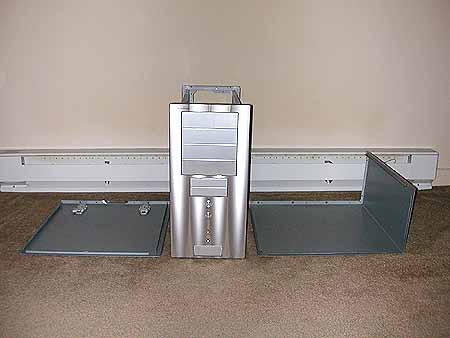 The back of the motherboard tray is now exposed. It is held in place by ten pop rivets, and is not removable.

It wouldn’t be too difficult for the ambitious to make this removable, but getting the side panel off is a bit of a chore anyway. Structural integrity would suffer in doing
this, as well.

The front bezel is held on by six screws, three per vertical side. In removing this, we can see how the front wires, switches, and ports are configured. Note that the front
access ports are mounted on the chassis, rather than the bezel itself. Also note where they’re mounted. I touched on this briefly earlier, and will get to that point shortly.

Also visible here are the front fan mounts. Note that the front fan opening will also accept an 80, 92 or 120mm fan (although it’s already equipped with a 120mm fan installed).

I thought I’d try a different approach to wire management here. Five and one half minutes later (30 seconds of which were spent typing in “google”, and then “how to braid”) resulted
in this (I just did the four USB cables, and the switch/LED leads): 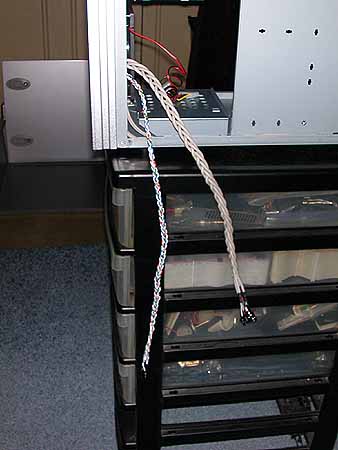 Now that we’ve had a good look at this case, let’s install some hardware into it.

I thought a really good test of this case would be to install my dual CPU system into it. First off, it’s a full size board. Plus, I’ve got a two drive RAID array
set up on it.

The biggest reason I did this however, was to see how it could handle HEAT. 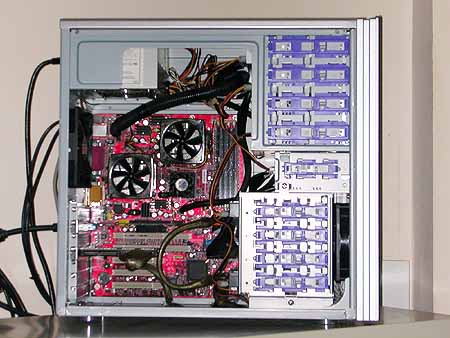 I’ve had this setup mounted in a full tower Chieftec (full article this (linked) picture is from
here) for a long time now, and know what my usual temperatures run. These massive towers are
known for flowing amazing amounts of air, which is why they’re ideally suited for server class machines.

If you look at the pictures I noted earlier again (especially the one at the bottom of Pg 1) you can see that not only are the front air intake openings small, but
most of them are completely blocked off by the front access ports assembly (see also the 4th picture down, Pg 4).

While this is truly a beautiful case, it lacks severely in airflow, despite having a pair of 120mm fans installed, front and rear.

The temperatures I’m now seeing with the duallie, in comparison to above;

I’ll be the first to admit, this configuration is a lot of cooling to ask of any case. But that is a very substantial increase in temperatures.

Running a single CPU system at default speeds in this case really shouldn’t encounter any difficulties however. This was more of an extreme “How well does it cool?” test I
put it up against. This case isn’t designed, or intended, to be a server chassis.

It would, however, be a stunning platform to build a multimedia machine in.

Visually, this case is outstanding. Fit and finish are virtually flawless. I encountered no sharp edges where you’d normally be working.

I also noted some, but very little, flex in the chassis, with the right side/top panel removed. Modding the motherboard tray to make it removable, while possible, would only
weaken the structural integrity of the chassis. With the side panels on, there’s no detectable flex.

The only thing I would not recommend (without some heavy modding to improve airflow) is any serious overclocking in this case. Frankly, this one is too damn beautiful to go
carving up anyway.

I’ve been impressed with this item since I unpacked it from the box. In fact, despite the temperatures, my duallie is still mounted up in it. =)

If cases were cars, this is more of a Rolls Royce than a Ferrari. Pass the Grey Poupon. 😉

I’d like to thank SilverStone for allowing me to review this case.

My Setup: CASE: I have an EAGLE tooless case, with TWO 80MM INTAKE FANS at the bottom, TWO 80MM EXHAUST FANS at the top. POWER SUPPLY: 450 WATT SERVER, (the better to run Peltiers with my friend…..) It has TWO

People often say very, very serious things very lightly. For instance, when young people are in love, they are prone to say things like “I would give my life for you.” You know, that’s a pretty serious words. However, however