I recently purchased a P4 2.80E GHz ‘Prescott’ CPU. Being a true OCer not afraid to try things out and making some minor modifications if neccessary, I decided to go for it and replaced my good ‘old’ P4 2.80C GHz ‘Northwood’. I read numerous stories about longer pipelines and, of course, the heat Prescott would generate, but still I wanted that 1 MB cache for the Overclockers.com SETI Team anyway!

Unfortunately the ‘heat’ stories were true; before I knew it, I had to bump up the Vcore to get Prime95 stability @ 3.4 GHz; with good air cooling, I was hitting 60C load temps in no-time while it’s not even summer!!!

However, it wasn’t even the CPU itself I was worried most about – I was VERY worried about the Power-regulating ‘MOSFETS’ next to the CPU-socket.

Some of them were literally scorching hot.

THAT hot can’t be good, so I got worried about my board (Asus P4P800) in the long run, as I really don’t wanna’ do any more major upgrades until Tejas/PCI-Express/BTX. I decided to go for just a ‘slight’ OC at default Core Voltage, the highest Prime95 + SETI stable I could achieve.

This kept the power mosfets cooler but still way hotter compared to when they were handling my Northwood. In fact, there still is tremendous heat around the CPU cooler, even though that area is surrounded by exhaust fans. Now the trouble with the P4P800/P4C800 boards is they use very tiny SMD (surface mounted device) mosfets, and they are half hiding between coils and capacitors: 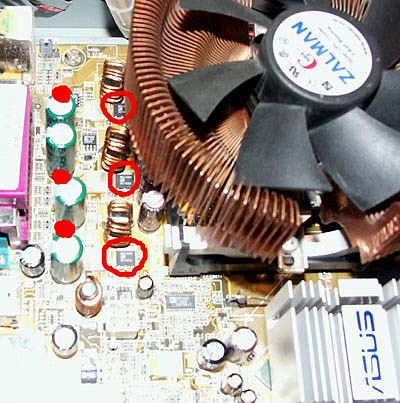 I marked them out as red dots where they are out of sight and circled the visible ones in red. As you can see, these are only a few square mm’s in size each, so it became apparent that I had to custom make some tiny heatsinks for them. Even tiny heatsinks are better than nothing, right?! So I started searching through my boxed with old PC stuff and found a nice old i486DX2/66 heatsink: 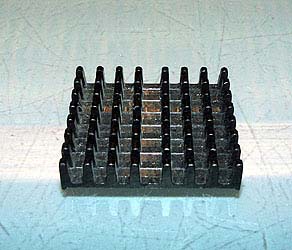 I cut them up into 6 square heatsinks: 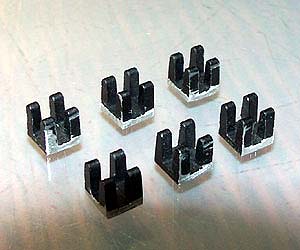 And since the surface area of the mosfets was so small, I had to use pliers to put them on. I simply put each one on with a large dab of super glue!

Now at least those mosfets can get rid of some of their heat. The heatsinks indeed heat up nicely, but at least they are all touchable now, so it makes me worry less about my board!
We can only wait and see, or hang on to those Northwoods! But I can understand why large OEM’s like Dell aren’t selling current Prescotts at all! It’s a good bet they will have severe RMA problems later on with current mainboards. I say mainboards, ‘cuz the Precott itself seems to handle the heat pretty well.

My 2.80E is now running 3.22 GHz 230 FSB, everything at default Voltages, 100% Prime95 + SETI stable. The heat is ‘manageable’ the system runs close to 50C load with 22C ambient right now. In benchmarks, it might not make much difference, but the system boots up and feels a tad faster. I now can pump out a few SETI WUs more every day when compared to my old Northwood, so at least I’ve reached my goal!

Here’s a view of how tiny those heatsinks are, can you make them out?! 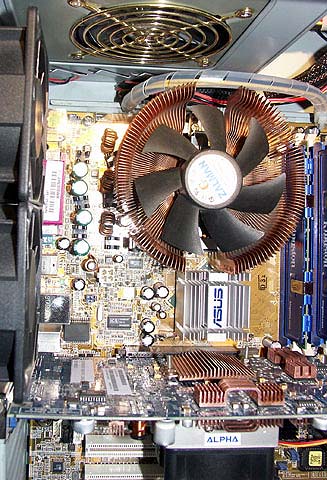 I hope this inspires people to make some effort in making their systems more ‘Prescott-ready’. Especially those who are using high Vcore!!!

Part One: Upgrading The Asus P2B is one of the most popular 440BX based Slot 1 motherboards around. Originally the P2B was designed to be used with the Slot 1 Intel PII and early PIII Katmai CPUs. Although the newer