Nifty replacement for the floppy – Brian

SUMMARY: A great upgrade for the old floppy drive

The good folks at Newegg sent us a Y-E Data 7 in 1
Digital Media Reader/Writer to take a look at.

How often do you going to use a floppy drive anymore? Aside from the random BIOS flash, it seems the venerable 3.5″ floppy disk is on it’s way into obsolescence.

With the advent of USB Thumb Drives and other high capacity storage devices similar to them, the old workhorse, sneaker-net star is on a faster and faster track to keeping
a space on the shelf from getting dusty.

But, if all floppy drives were like this, or if for some reason you have to have a floppy drive mounted in your PC, you might want to consider one of these. 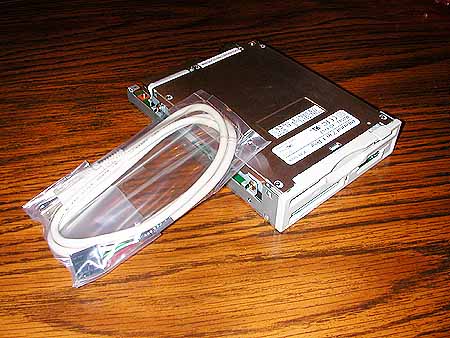 As shipped, it comes as an OEM type package, with just the drive and cable included. The card reader is USB 1.1 compatable only. The YD-8V03 merges what appears to be a laptop floppy drive and a
6 in 1 card reader (thus making this a 7 in 1 reader) into one very neat package. 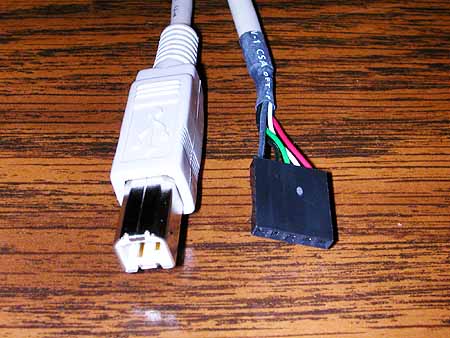 I tested this out in two systems, one running Windows XP Professional – SP1a, the other Windows 2000 Advanced Server – SP4, and both machines detected this device and installed drivers automatically with
no problems.

While I didn’t test it on a Windows 98 or ME machine, there is support for those two OS’es as well. I went to the support page
at Y-E Data’s website, and found they have any and all the documentation you’d need there. Including some downloads to dress up the icons that get placed into “My Computer”. For example;

“For Windows XP SP1:
Driver Ver 1.06
Internal 7 in 1 works with Windows XP standard built-in Microsoft’s
drivers. The following driver changes the icon to the individual
memory card icon so you can find the drive easily.”

(Text and image above from Y-E Data) 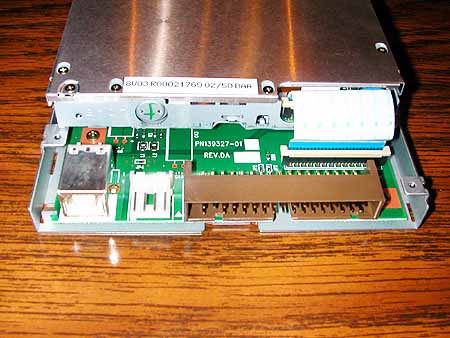 The back end of the drive differs from a standard floppy drive only by the inclusion of the USB socket. The aforementioned cable plugs into this, and the other end into a
USB header on the motherboard.

If you don’t have an available USB header on your motherboard (they’re all in use, or none were built in), you can get a USB extension cable fairly cheaply, and run that from
the drive out through an expansion slot to an open USB port in the I/O panel.

If those are full…get a hub. And if that’s full….=P 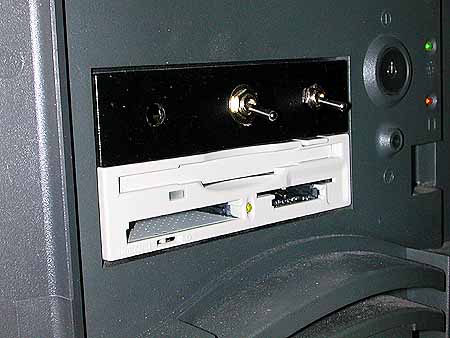 After installing the YD-8V03 in my main PC and firing it up, I was greeted by this in “My computer”;

I then downloaded the “driver” as outlined above, and made the icons all pretty, and tested the drive out.

I started out by putting a floppy disk in, which it read fine. I then formatted it, which also worked perfectly. Next I pulled the Compact Flash card out of my camera, and
transferred the pictures for this article to my desktop.

I then deleted all but two of them, which I sent to the just formatted floppy disk in the A: drive. Followed by taking my spare CF card, and then transferring the two
pictures from the floppy, to it.

All of these transfers of those pictures went off without a hitch. 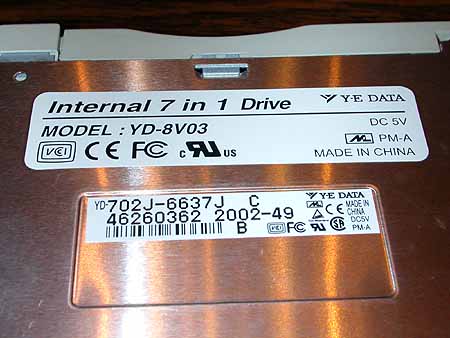 With the trend lately towards smaller and faster, this item is a great way to economize space. If it had USB 2.0 support, this would really be a standout product. Even with only USB 1.1 speed
available, it’s still a very worthwhile upgrade.

How much more can you really ask from a product that, when plugged in, is automatically detected by your OS and drivers installed, and following the reboot required, works exactly as advertised?

The YD-8V03 takes up no more space than the standard floppy drive it replaces, only adds one thin cable to the wiring inside your case, and adds support for six additional removable medias that
old floppy drive didn’t have.

I’d like to thank Newegg for letting me test this out.

Zzzzzzzz . . . . 2003 is shaping up to be a snoozer. Just not a whole lot dramatic and exciting is going to happen for most of the next year. There will be flurries of activity here and there,

1) Well, there’s hardly any point in buying Prescott-32 now, is there? 2) There’s good reason at the moment to be underwhelmed by Prescott-64. Going to 64-bits hardly solves Prescott’s most pressing problem: heat. You don’t fix an overheated engine

Nifty replacement for the floppy - Brian