This will be a scratch build of an Acrylic Tech Bench, that can be wall-mounted, and will be able to be used in an upright position or laying down, and thus called The Sled. The case was entered in the Case Modding Showdown 2009 at New Mod City.

Official Sponsor for this Project

Ozito Australia supplied me with one of these wonderful Rotary Tool Kits:

More photos of Ozito Parcel un-boxing can be seen in post #8 of this thread. Also, Beaumont’s Glass, Wonthaggi, gave me a 60% discount on all acrylic plexi for this project.

Thank you masbuskado for the 3D program suggestion, eMachineShop works great. When I was in the planning stages of this mod, it dawned on me that since we had just moved to a new house, that the garage didn’t have any benches or shelves to work on projects or do any general PC maintenance. Before beginning the project, I had to first build a work-bench area and also construct the shadow board tool holder for all my hand tools. This worklog post shows photos of my work-bench.

After picking up my acrylic plexi, it was on to marking out for cutting: 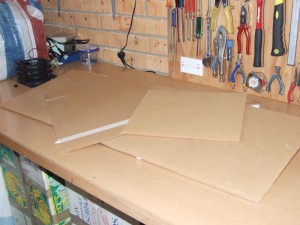 The next step was the bending of the acrylic, this was a first for me; here’s a video log of the bending process. 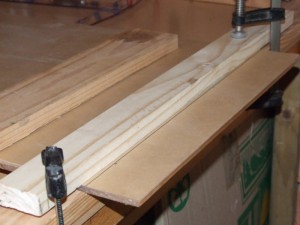 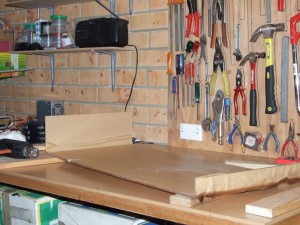 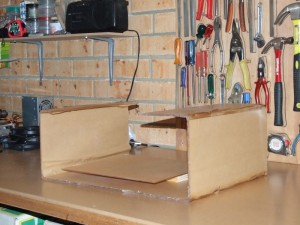 Here are a few components that will be used in The Sled Tech Bench – some momentary switches for power & reset and LED illuminated switch for powering LEDs that may be used (that’s still undecided), and some motherboard mounts, and screws. 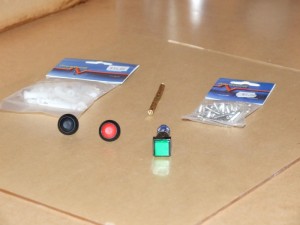 Also, while I was out, I picked up a couple of bargains: 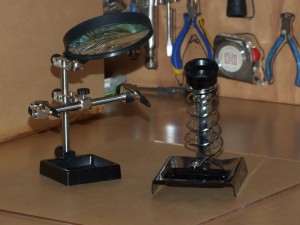 I already had both of these, but could not find them since moving into my new house. They are probably in the same place as the Nikon camera charger that I haven’t found yet, so I am using my wife’s Fuji 6500fd camera. Video Log 2- Bending Acrylic Part 2

Cut out the two 120mm fan holes for the top exhaust ports, and made an “Ozito” badge name plate to go on the case front. The Ozito Rotary Tool cuts the acrylic plexi like butter, also used to make a nifty Ozito name badge.

I’m taking an old case that was my garage PC and dissecting it to use parts for the current project. After de-riveting and some cutting, I pulled the motherboard tray area out and constructed a tray to use in The Sled.  Once removed, I also trimmed the excess pieces that I didn’t need and reinforced with some 12 mm aluminum angle and tray brace. 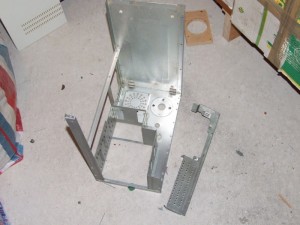 After all that was done, I moved on to cutting some side panels for The Sled case. 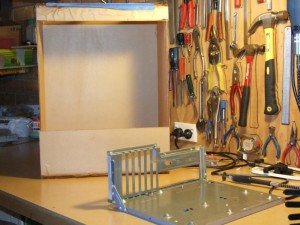 Then, I painted the motherboard tray black, but still have to do a second coat and the clear coat.

Next up was making the cages to hold an optical drive, card reader, and HDDs from acrylic plexi. Again, some more bending acrylic.

I made the aluminum framing to hold the plexi side panels, incorporated a PSU mount into the frame, and installed motherboard tray stand-offs. Also, cut out the I/O plate area in the plexi. 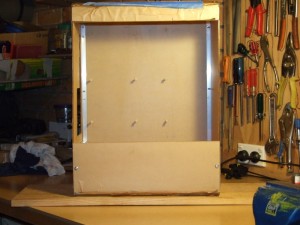 Making some acrylic feet for The Sled, cut out the DVD/Card Reader bay slots and PSU mount opening, and also something special. What do I mean special? Well, we will get to that down below!!!

NOTE:  Drives in pictures are only for fitting and sizing; they won’t be used in this project. 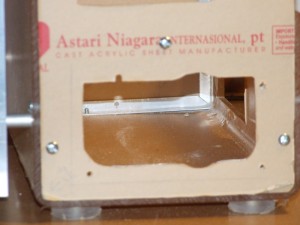 Now for something special! What would a Sled be without rails to glide on? So, I have made some for it.

Next, I put together some LEDs to light up The Sled. So, here in Post #16 is a sneak peek at some finished. The first few LEDs I did with resistors attached to LEDs, then I remembered I had some circuit board left from another project, so I used that to put all the resistors on and power up the LEDs.

I’m hoping they will look a lot better when the protective paper is removed from The Sled. Next, the motherboard tray gets a second coat of black paint and clear coat.

I then wired some more LEDs and some teaser pics of testing the LED lighting. It will look a lot better when the protective paper comes off. The top nine LEDs are UV Purple, the case feet and PSU area are ultra bright blue. 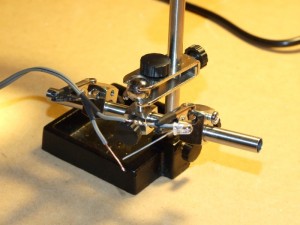 Getting Down to Some More Cutting

I cut a 120 mm fan hole in the right side for an intake fan, and cut a rear access slot for the rear of motherboard tray for easier installation of aftermarket CPU-HSF back plates, etc. Also, cut vent slots for the PSU fan intake and exhaust. 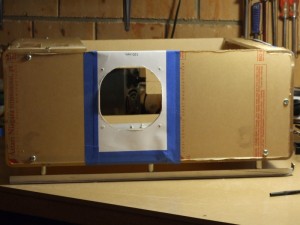 Note: This will have a removable plate/door cover on it too!

Made a front door cover panel and rear access door to motherboard tray opening, hinged with piano hinge. Also, mounted magnetic catches to keep front door panel closed securely.
Also, forgot about these that I got when I bought the wife’s CM Scout:  Arctic Cooling Freezer X-Treme Pro HSF for the CPU, and a 92 mm red LED fan (the red led fan is for a Thermalright HR-03 heatsink). 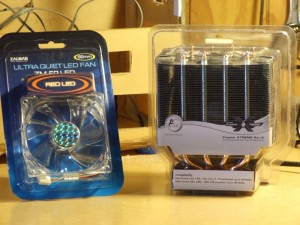 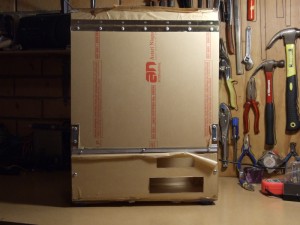 I have wired the power and reset switches, LEDs for PWR and HDD activity, and mounted them. Mounted the PCB LED power resistor board on its own little sled plexi rails, and wired LED power switch to control the case LED lighting. I also did some more work on the HDD cage; cut out my insignia “JS” into the plexi and mounted in The Sled.
NOTE: Tutorial on making the LED circuit board can be seen in Post #40 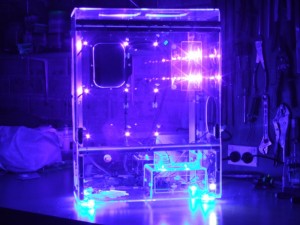 I decided to make an acrylic plexi fan grill for the top fans.

I put some strong black fiberglass fly wire behind the grill to help keep the dust bunnies out…
Worked on the Ozito emblem, and put some clear film (like what you cover books with) to test out how it looks painted at back. I also made a “The Sled” badge too.

Received a nice parcel from a good friend (ihrsetrdr) here @ OCForums when I recently purchased an ECS-P45T-A – Black Series Motherboard from him. The pics of these can be seen in post #32 of this thread.

At first I wasn’t quite happy with the way the Arctic Cooling Freezer Extreme mounted. It has a mounting plate and no back plate; just these tiny pins that lock the mount bracket in place on the motherboard. We all know how we hate those push pins on the Intel HSF, and how ineffective they can be at times. As with another one of my heatsinks, the Vendetta 2, I did a bolt through mod for the AC Freezer 7 pro. So here is my solution to the AC Freezer Extreme mounting. 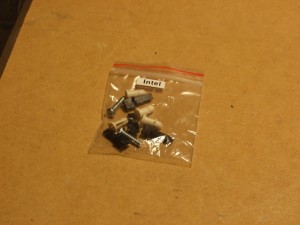 This heatsink is a nice beast too, and now very secure with my back plate bolt through mod.

After a rather long night of stripping down my main rig and removing the Corsair HX-520 PSU to put in The Sled, it was on to the PSU install, along with all of the hardware. 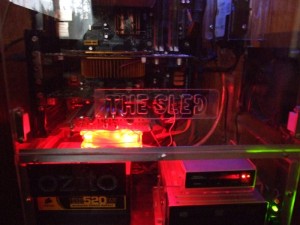