Every once in a while, something truly unexpected comes along. A piece of hardware you thought you’d never see in a million years. A sub-kilobuck CPU with an unlocked multiplier from Intel used to be one of those things, at least until the processors with a “K” in their model number showed up.

Whoever it was at Intel that pushed the idea of releasing two CPUs with unlocked multipliers, you deserve a tip o’ the hat for sure. Previously, some of the most entertaining yet affordable overclocking odysseys occurred exclusively on the AMD platform. They have consistently had unlocked multipliers in their Black Edition processors with relatively little price premium over their locked-down brothers.

Now there are two new, unlocked, Intel processors available for the P55 platform with the coveted unlocked multiplier – the i7 875K and the i5 655K. At their hearts are the i7 870 and i5 650 and there is no indication that anything has changed except to unlock their multipliers.

That’s no small change though. Historically, Intel has saved unlocked multipliers for the best of the best of their CPU lines. They were designated Extreme and tended to cost at or over a thousand dollars.

Here’s some of what Intel has to say about their new, spiffy unlocked chips:

All true there. Pushing the CPU’s frequency without needing to worry about the rest of the system sounds great to me! Here are the specifications for both of the new CPUs:

A quick comparison of some of the Core i7 & Core i5 chips:

Here they are all boxed up and ready to be delivered to your door!

Today we have the i5 655K in-hand to put through its paces.

First up, we’ll go through the single test run at stock clocks only – the Everest suite of CPU & FPU tests. All of the other tests were run overclocked as well. For comparison, we’ll use results from another recently reviewed chip, the AMD Athlon II 640 (see the ASUS Crosshair IV Formula review) as well as those from a Phenom II 965 BE also here for testing.

You may notice a few minor differences in the stock numbers for the 655K as opposed to the CIVF revew. That’s because the chip was put through the standard three runs at stock testing after that review (for which they were run once just for comparison purposes). This gives an accurate representation of what you can expect from out-of-the-box performance at the rated speed of 3.2GHz.  The test system used in this review consists of:

The CPU was cooled with a custom water loop, in this order:

Note that this chip does have turbo boost, which allows up to a 260MHz boost for single-threaded applications. For our purposes, that feature was disabled during testing.

Now, the Everest results. Note that the CPU AES test is missing because of obviously flawed results. Even with the most recent version, they were in the 200,000 range, when the Athlon & Phenom results were in the mid 20-thousand range and all reference results were below 50,000.

A good showing by a dual core CPU for sure, with FPU results that were especially strong compared to the CPUs with four physical cores.

Overclocking this chip was an absolute blast. I haven’t had this much fun since I tested the first unlocked CPU I ever had, an AMD 5000+ Black Edition. Things have come a very long way since then.

The first thing we’ll look at is 24/7 stability. Prime95 Small FFT was the stress test of choice, run only for an hour due to time constraints. These are good starting numbers. More time may be needed to ensure rock-sold 24/7 stability.

This chip is no slouch at all. It started at a modest 4GHz to start getting a feel for how it behaved.

Once it felt pretty good, I set an arbitrary, reasonable maximum voltage of 1.35Vcore and 1.35V VTT. After that, BCLK was set to 160 (it actually ended up being raised to 161 later)  to get the RAM up a little bit to DDR3-1600/8-8-8-24. The system booted just fine so it was time to crank the multiplier and start stress testing. Here’s how it turned out.

Nothing less than a stunning 4.5GHz, stable overclock! These are 24/7 voltages too. So you’re talking about a 1.3GHz overclock from stock speed, and 4.5GHz 24/7 operating speed. Nothing short of amazing.

Real quickly, we’ll go over a game test. Our main audience is obviously overclockers, but a lot of us (myself included) wouldn’t be here if we didn’t start by pushing our systems to get that extra few FPS.

The game benchmark of choice was Stalker: Call of Pripyat. It was tested at 1280×1024 on the “Ultra” setting with both MSAA turned off and 4x MSAA.

As you can see, without MSAA, increased clock speed helps quite a bit. Overclocked, the 655K runs away with it. With MSAA turned on though, it would seem GPU power is the name of that game.

On to the benchmarks!

To flesh out the performance numbers a bit, we are able to include results from an i7 870 clocked at 4GHz or the 2D and 3D performance graphs, with the exception of PiFast.

As expected, this CPU shines at single-threaded applications, beating out every competitor in SuperPi 1M. Even in the multi-threaded WPrime 32M & PiFast it held its own, with overclocked results beating out both stock-clocked AMD chips WPrime32M and trouncing both in PiFast.

Next up are the longer running brothers, SuperPi 32M and WPrime 1024M. The SuperPi 32M results are graphed in seconds, but the actual score in minutes:seconds is displayed in the data labels.

With single-threaded SuperPi, the 655K beat up on the competition again, except for the 870, which somehow pulled out a win with 500MHz less clock speed. This caused a re-check of the benches, but it’s correct. After being overclocked, this little dualie showed it has some guts again in multi-threaded apps, beating out the Athlon II & Phenom (both at stock speeds of 3.0GHz and 3.4GHz, respectively), just being edged out by the overclocked Athlon II.

To round out 2D performance, we’ll look at something indicative of more ‘real-world’ performance – rendering. The metrics are supplied by Cinebench, both R10 and R11.5.

Well, it’s not going to set any rendering records, but when overclocked it can definitely hang with a couple of quad cores. Considering this chip is just ripe for the clocking, that’s not a drawback at all.

For 3D testing, the two benches with CPU scores separated out as well as applied to the final score were used – 3DMark06 and 3DMark Vantage. The 655K results are the two brighter colors. The Phenom II 965BE was not compared in these.

While eight threads makes a ton of difference, it would seem a large overclock makes one as well. Not bad performance at all considering it’s compared to both a true quad core and a quad with HT!

In typical fashion, literally the first thing I did after pulling this CPU out of its box was overclock the snot out of it. Didn’t even see what it would do with HT off, just started cranking. For benching on water, the maximum voltage allowed was 1.45V VTT and 1.5Vcore. This is a 32nm chip after all, and I would strongly caution against running even at those levels for any length of time.

SuperPi 1M was of course the bench that completed at the highest clocks. Ironically, the faster time (on the right) was completed at lower clock speed. Both the SuperPi 1M and 32M times were a personal best.

Moving on to WPrime, both of these times earned a few global points on HWBot. Fun stuff!

Last, but not least, we have the max CPUz validation. 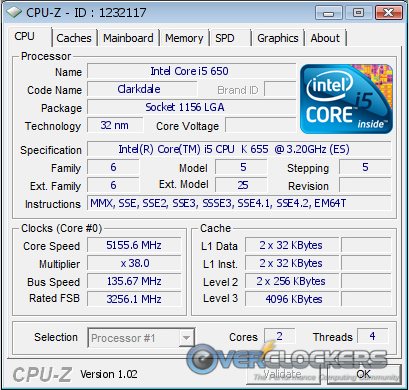 Yep, with HT on, this chip managed to validate at a whopping 5155MHz!

What is there to say really? Here we’ve seen a stellar Intel dual core with HT and an unlocked multiplier absolutely blow through benches, overclock like mad (with relative ease) and do it all without breaking the bank.

Now, keeping things in perspective, we should note the results on HWBot for the 655K are pretty darn close to those of the i5 650, further indication that this really is what its name applies – a 650 but with an unlocked multi. This is not a bad thing, especially if you don’t already have a 650.

If there is anything bad to say about this processor, I’m having a hard time finding it. Um…it’s not a quad core, there. But reading this, you weren’t looking for a quad core anyway. Fast, fun and full of potential, this chip has Overclockers Approved written all over it.

If you find yourself in the market for an Intel dual core, this one deserves a look or three, followed by a press of the “Add to Cart” button. Then hours of overclocking bliss!

As CES 2020 continues on, we stopped by the MSI ballroom and had a chance to see the new wares on display.

The HWBOT World Tour 2017 featured overclocking events spanning ten countries around the world. These included the US, Brazil, France, Taiwan, South Africa, Russia, Indonesia and Australia. At each stop, an Overclocking World Championship 2017 Qualifier contest was held – an extreme overclocking contest where the region’s most talented overclockers competed for a ticket to the OCWC Final.

i5 Clarkdale on Biostar TH55XE

We’ve seen a lot of news about Intel’s 32nm CPU on the internet in the past six months…Now let us take a look at Intel’s LGA 1156 platform. This platform will launch new 32nm CPU products, including Core i5 6XX and Core i3 5XX series, named Clarkdale.

Nice... Looking forward to Overclocking the crap out of mine with DICE.

Well I may push this 661 this week and see what I can come up with:) You have given me incentive.

I wish. Just not in the cards at this point. We'll just have to see what Intel has up their sleeve for the future...and whether we can get our hands on one. :thup:

I wish. Just not in the cards at this point. We'll just have to see what Intel has up their sleeve for the future...and whether we can get our hands on one. :thup:

Looks like you were typing while I was posting. :)

Wish I had one though, I really do!