SUMMARY: Another lower noise heatsink, the Speeze “CopperRock” may be acceptable for Socket A cooling with its stock fan.

Speeze¹ sent samples of some of their latest heatsinks for a test; of particular interest was the “CopperRock” unit. This is an all copper heatsink of modest proportions: 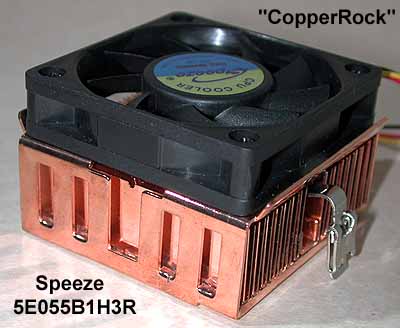 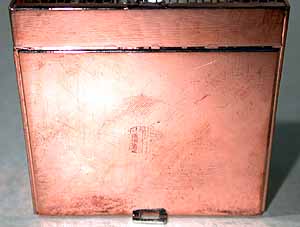 The base is smooth and flat. 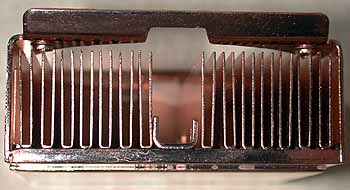 Looking at it from the side, you can see how the fins are constructed and attached to the base. The fins are folded into shape and then soldered to the base. There are 28 fins in total, measuring 23/32″ x 2 3/8″. This translates to about 96 inches², or 0.66 ft² surface area. Compared to other units on the market, fin surface area is on the low side. 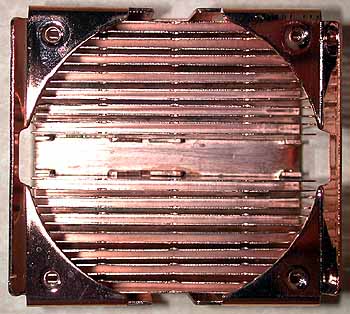 The clip channel has two inserts that serve to index the clip – this means that every time you mount the CopperRock, it will sit exactly the same, as the heatsink can not move along the clip’s axis. This is a good move, as it prevents the heatsink’s base from contacting the cam box (the high part of the socket) when you mount it correctly; we’re seeing more of this in heatsinks.

I prepared the Speeze CopperRock by boring a hole completely through the base so I could epoxy a thermocouple above the CPU. The thermocouple is attached to an Omega HH23 Digital Thermometer. Ambient temps were measured with a thermocouple placed about 1 inch from the fan’s intake. I used Prime 95 to stress the CPU on an Iwill KK266, BD133 (MBM temps are on-die) and Abit KT7. Arctic Silver grease was used in all tests. CPU Case Temp is the temp at that point where the CPU contacts the heatsink, CPU Back Temps are measured by a thermocouple on the center back of the CPU.

In addition, the Speeze was tested on the Simulated CPU Die Tester at 100.5 watts. This is the “purest” test of a heatsink’s performance as extraneous factors, such as secondary heat path effects, are not included.

Mounting a noisy YS Tech 40 cfm fan on the CopperRock improved results somewhat, but nowhere near enough to justify the increase in noise. I think this indicates that the CopperRock was designed to maximize airflow through the fins with a relatively low cfm fan; pushing a lot more air through it very quickly bumps up against diminishing returns.

Speeze’s CopperRock is an interesting entry – for its size and weight, it’s an OK performer and looks like a good heatsink for system integrators. Based on its construction, I expect it will not be premium priced. If you’re not pushing your CPU to the max, the CopperRock will give your ears a break and keep CPU temps in OK territory.

While it doesn’t make our recommended list (cutoff C/W: 0.30), for “normal” lower noise use, the CopperRock could be good way to go.

Speeze lists a C/W 0.53 – unfortunately, heatsink manufacturers’ listed C/Ws are all over the place. I visited a number of them while in Taiwan and found testing capabilities and methodologies vary widely, so results among them are not comparable.

¹Speeze is marketed by Spire Products, which is under Electronic Cooling Tech Corp.,Ltd, located in Taiwan. The US distributor is JamiTech Corp.

Following is a report of a test on Circuit Works Part No. 7100, Conductive Silver Grease. OBJECTIVE The objective of the test was to establish the products’ suitability for use as a heat transfer interface material between PC microprocessors and