SuperSpeed USB started showing up in the marketplace in time for the 2009 holiday shopping season.  There have been two major forces bringing this new technology to the market; Gigabyte and Asus.  The fact that it is these two manufacturers first with new technology should be no surprise to anyone as they are the two largest motherboard manufacturers in the world.  What nobody saw coming was the variety of implementation that would be used.

Right out of the gate, both Asus and Gigabyte are using non-standard methods to implement this new technology.  By standard, I’m referring to connecting the NEC USB3.0 controller chip into the P55 chipset directly using the available PCIe 1.1 lanes that are a standard part of the platform. 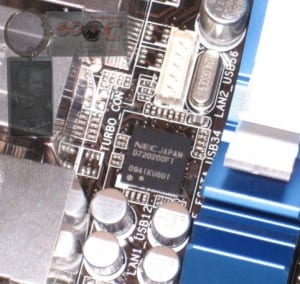 In case you missed it, I have already written in detail concerning Gigabyte’s implementation in part 1 and part 2 of this three part series.  However, many of you had questions concerning how Gigabyte’s “Turbo” mode would stack up against the SSUSB implementation that Asus has brought to the table. And so I bring you part 3…

I’ll be using the P55A-UD3R as the candidate from the Gigabyte line-up.  Please refer to my previous articles for more pictures, but as a quick reminder, this is one of the least expensive motherboards in Gigabyte’s line-up to include SSUSB ports (blue). 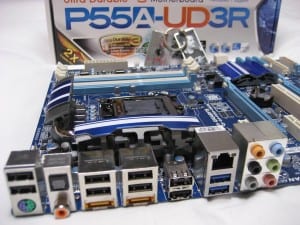 Here is a brief recap of Gigabyte’s technology (quoted from part 2):

Both the SSUSB controller, and the SATA3 controller can communicate with the CPU in two different ways, and the user can choose their preference.  If maximum performance of these devices is your priority, you can turn on “Turbo” mode in the BIOS.  This will interface the controllers with the CPU via one of the 16 PCIe 2.0 lanes on the CPU die itself.  The downside of this approach is that your PCIe graphics card bandwidth will get knocked in half (although that’s usually still plenty).  If you need fast, but not the absolute fastest SSUSB/SATA3 performance, and you prefer your graphics card to have maximum performance, you can turn off Turbo mode in the BIOS, and the SSUSB/SATA3 controllers will interface with the CPU via a PCIe 1.1 lane in the P55 chipset via the Direct Media Interface (DMI).  As we saw in my initial testing, the Turbo mode did have some good performance advantages.  The one situation in which the user will not have an option is when running dual graphics cards. In this configuration, the system will run 8 PCIe lanes to each graphics cards, and force the SSUSB and SATA3 controllers to use the non Turbo interface.

The Asus approach was an attempt to please everyone, all the time.  How is it possible?  Through the use of a “bridge chip”.  This multiplies the available PCIe lanes, allowing both the SATA3 and USB3.0 controller full speed connectivity to the system.  Asus dubs their implementation “True USB3.0”.  To represent Asus’s SSUSB implementation, I have here today the P7P55D-E Deluxe. 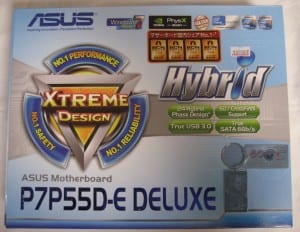 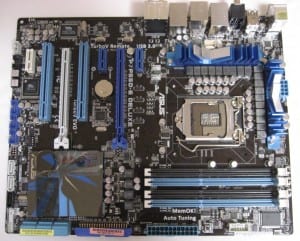 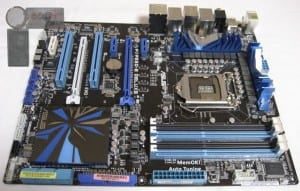 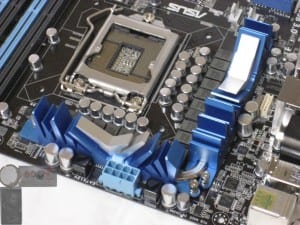 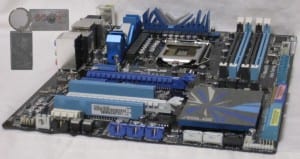 If we dig a little further back into part 1, you’ll see a quote from my source with Gigabyte claiming their “Turbo” mode is the superior technology:

Key to our design is the DMI bus (10Gb/s) between the CPU and P55 chipset because any device that is connected to the chipset (audio card, RAID sub-system, even the drive with your OS) will have to share that bus. So if you’re loading the chipset’s SATA, USB 2.0 and PCI-E bandwidth then it makes sense to use Turbo mode. Adding a bridge chip (such as the PLX chip) doesn’t provide extra DMI bus bandwidth, so there is a potential bottle neck!”
– source in Gigabyte Co. Ltd.

So Gigabyte would have us believe that the real bottleneck is the DMI bus, and that adding a bridge chip will not provide the bandwidth desired.  During part two of my testing, I wanted to find out if I was capable of saturating the DMI bus to the point that my non-Turbo results were negatively affected.  While I did see evidence that the bandwidth was affected during this testing, it was anything but conclusive.  I pushed forward and the article was published, but I had many lingering questions. I asked my source at Gigabyte this question:

In my testing, I am finding that when I’ve loaded the chipset, the non-Turbo” mode is getting a lot of slowdown, so it would seem to support your claim that the DMI bus is being saturated.  But, I am not finding similar slowdowns when using a SATA connection for my testing…even though the ICH10R also used the DMI bus…can you help me understand why saturating the chipset slows down non-Turbo SSUSB, but not SATA connected devices?  Thanks!

I never received an answer.

I have changed my methodology for this final round of testing.  For one, one of my MTRON SSDs has failed, so I can no longer exactly duplicate my previous testing.  But there is a second more important reason: I decided to run with stock settings and speeds.  My previous testing was done to eliminate bottlenecks.  But what we really would like to see is if any bottlenecks exist. Slowing all the system busses down to stock speed should amplify any would-be bottlenecks.  My testing was completed with the following:

I should also mention that I updated the BIOS of each motherboard to the most recent non-beta release.  I also updated the NEC controller firmware to V3.0.2.1, for the Asus motherboard only.  Gigabyte did not have a firmware update provided for the P55A-UD3R at the time of testing, so it soldiered on with the firmware that it shipped with.  In both cases, I updated the USB3.0 drivers to version 1.0.17.0.

Well, like before, I will start this off with my ATTO results. 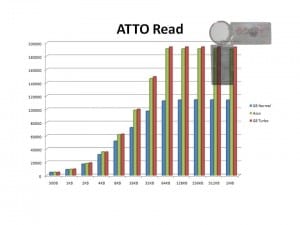 Right away here we can see that the Asus bridge chip is doing it’s job, and keeping up with Gigabyte’s “Turbo” mode.  The standard non-Turbo mode from Gigabyte falls way behind here. 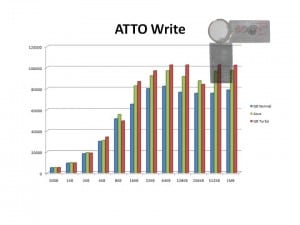 The results are much closer with write speeds, as to be expected.  The Intel SSD is only rated to deliver 100MB/s sequential write speeds.

Next up, we’ll look at Crystal Disk Mark testing. 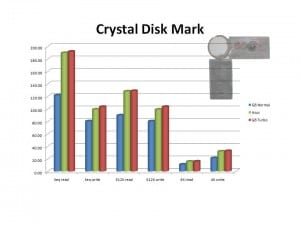 Next we’ll move on to HD Tune testing. 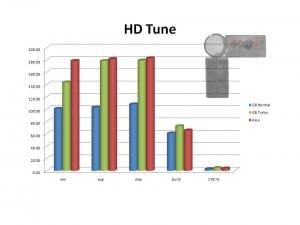 Things are also pretty much as expected here.  Asus’ bridge chip doing a great job keeping up.  One thing to note however, is that Asus’ design required about 5% CPU overhead compared to 2-3% with either of Gigabyte’s modes.

Last, but certainly not least, I wanted to do some brief real world testing.  In this case, I simple copied 7GB worth of files from one SSD to the other.  The destination drive was formatted before each test was conducted to ensure consistency.  The files were all of my benching apps, screenshots, a 2GB copy-waza rar file, etc.- a good combination of large and small.  Here are the results: 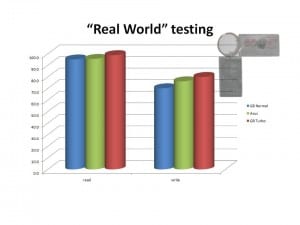 As you can see, in my extremely limited “real world” test, the differences are much smaller than portrayed in the synthetic testing.  Of course, if you are transferring a bunch of movies or RAW photos, etc., your real world could be much different than mine.  So please take these results with a grain of salt.

Well, I need to wrap this thing up…and I’ve already said this twice previously, but I have to say it again.  If you are only concerned with maximum performance of all your system’s components all the time, and you plan on running multiple graphics cards….WHY ARE YOU LOOKING AT LGA1156/P55? The platform of choice for the demanding enthusiast is LGA1366/X58.  Asus and Gigabyte already have models available with SSUSB and SATA3.  Moving DOWN to the LGA1156/P55 platform means you are willing to make a few compromises.

However if you are determined to get this platform and require SSUSB, there are a couple things you should consider.  First off, how fast are your USB3.0 devices.  In my testing, the Intel SSD exploits the weaknesses in the slower designs, but a slower drive would be hard pressed to notice any difference. In addition, the Gigabyte boards all support the higher 1500mA power output on each USB3.0 port.  The Asus sticks to the reference 850mA, this may limit you in the future.

Lastly, do you plan on running multiple graphics cards (if so, you should be looking at LGA1366/X58)?  If not, then you’ll be hard pressed to see any performance advantage in the graphics department dropping your x16 slot down to x8 to run Turbo mode for your SSUSB devices.  It’s been shown time and time again, that even the latest graphics cards are not starved for PCIe bandwidth.

So, if I had to choose between these two technologies, I would choose the Asus, because I run multiple graphics cards and I do not like to compromise performance of any components.  But I’m not limited, and for my dollar I’d stick to LGA1366/X58!  If I was building a PC for a friend or family member who was concerned with price and not gaming, I would not hesitate in recommending the Gigabyte P55A series.

One last thing before I leave you.  During my testing, I did see some very strange results.  The first boot after getting the Asus board and drivers properly installed.  I ran HD Tune quite a few times, and each time I got very different results, at random, jumping up and down in performance.  Crystal Disk Mark and ATTO showed similar behavior.  After another reboot the issue disappeared, and I all but forgot about it….until I set-up the Gigabyte board and updated it, when it also gave me unpredictable HD Tune results.  The only SSUSB implementation that did not show any irregularities throughout all testing was Gigabyte’s “Turbo” mode.

My suspicion in all of this, is that this technology is obviously still having growing pains and hopefully these types of irregularities will get ironed out in time.

These are the Gigabyte non-Turbo runs; slow, normal, and fast.

These are the Asus HD Tune runs; slow, medium, fast, and normal (fastest).

This is the slower Asus Crystal Disk Mark run (on the left) next to a normal run.

And this is the slow Asus ATTO run (on the left) next to a normal run.

Thank you for taking the time to read through my my articles.  Please feel free to comment, I do check regularly and will attempt to follow-up if you have any questions!  Also, thanks to Gigabyte Japan for all hardware tested!

About Jeremiah Allen 12 Articles
My name is Jeremiah Allen aka "MIAHALLEN". I'm a two time North American overclocking champion and one time overclocking World Champion. I love technology and pushing technology to the limits! More importantly, I'm a born again Christian, a husband, and a father of two.
Website

ASUS is usually one of the first manufacturers to market when a new platform is released, and that continues to be the case with the Haswell-E/X99 release. At first look, the ASUS X99 Deluxe looks about as packed with features as I’ve ever seen on a motherboard. In fact, ASUS claims this motherboard is their most feature-rich enthusiast offering to date. It’s time to have a look at the X99 Deluxe and see what ASUS has done with their initial Haswell-E/X99 offering, so let’s get after it!

When choosing a graphics card to buy, brand name matters the least in actual performance terms. Since early graphic card releases are reference design, they are typically identical between brands; other than the packaging, cooler sticker, warranty, etc. As such,

NVIDIA’s GK104 based graphics cards made quite a splash while being used in some of the GTX 600 series cards, and now they make their presence known in the GTX 700 series as well. Today, we have a GTX 770 series card from ASUS to check out – the GTX 770 DirectCU II OC. We just knew ASUS was going to take the GTX 770 reference design, beef up the power delivery, and overclock it. It’s what they do after all! So, let’s take this latest offering from ASUS for a test drive and see how well their efforts have paid off.