John Bogush (see below) emailed a great tip concerning the MC1000. I was surprised at the performance I was getting with it and John’s email helped a lot. What I did after reading John’s suggestion was to add a coldplate to the MC1000; I used an aluminum plate from a Tom Leufken’s kit. I had to add extra insulation to compensate for the added height.

Just doing this knocked off 3-4 C from the temps I first recorded. Hmmm…on to something here. As I inspected the MC1000 closely, I found the thermal grease was dry, so I cleaned it up and added new grease. Doing this alone dropped temps about 4 C without the coldplate.

Now adding the coldplate with the new grease resulted in temps dropping by about 9 C from what I first observed (see table below for comparison). At rest the MC1000 delivered 17 C at 504 MHz without Waterfall and -2 C with Waterfall running. This is more like what I would have expected from the MC1000 just based on its specs.

The smaller the CPU’s slug, the more you will need to add a coldplate to the MC1000 to get it working for you. I used aluminum but a copper coldplate will probably knock temps down another degree or two.

MC 1000 Tip 1/10/00: “Email from John Bogush (Unlimited Hardware): “Just wanted to drop ya a line about the MC1000 review article. I did a
review a while back on the MC1000 PPGA slotket setup and found it’s performance very good keeping a Celeron 366 within a few degrees of 0 and allowing me another stable 50MHz above what I could get with a FDP-32.

A couple of weeks later I got the conversion kit for my MC1000 to try it on a slot1 processor. Having high hopes based on my earlier results I was extremely disappointed to find that the MC1000 actually ran my PIII 450 at 600 MHz 10C warmer than my ALPHA P3125S heatsink and 600 MHz was now not stable at all. I got curious so I sent an email off to Telurex about my findings and included all the specs of the MC1000. Keep in mind Gabe from SwifTech says Melcor helped design the MC1000 and I wanted an independent opinion. I was told from Telurex that the TEC used in the MC1000 should have complete contact with the processor surface with no part of the TEC
(cold side) exposed to air.

The way the stock MC1000 is assembled only about a 1/2 square inch of the large TEC actually contacts the processor. The 1/2 square inch figure was an approx guess based on the size of the PIII’s small “slug” surface. That was the size of the thermal compound “imprint” left behind on the TEC when the MC1000 was disassembled. That is what made me think of it especially when compared to the much larger PPGA “slug” imprint.

Tellurex basically explained it to me like this; “If you have a 72 watt TEC and only 50% of the TEC is actually contacting the processor then effectively you are only using a 36 watt TEC”. Using a cold plate that contacts 100% of the TEC’s surface greatly increases it’s efficiency.

I made up a small “cold plate” from 1/8″ aluminum the same size as the MC1000’s TEC and reassembled it with a thicker gasket. The result was thermal diode temps below 10c (about 30c cooler) and absolute stable processor performance at 600MHz.”

Swiftech’s air-cooled peltier screamer is one way to reach stability at overclocked speeds. For chips “on-the-edge”, it might unlock higher speeds not attainable with air-cooling alone.

Note: Dan Edgar, a long-time overclocker’s fan, recently acquired a Coppermine 500E. Coppermine cooling is almost an oxymoron, so consequently Dan found himself with a surplus Swiftech MC1000. To make a long story short, Dan sent me the MC1000 to test and then sell – these units sell for $119 new and Dan is willing to let this one go for $70. Drop me a line if interested
(Email Joe).


Swiftech is one of the first vendors to develop an air-cooled peltier which effectively combats condensation. This entails careful attention to insulation and sealing which is evident as you inspect the MC1000. As the picture shows, it comes with enough parts to ensure that moisture is not going to be a problem. The directions that come with the unit are very thorough and should be closely followed – just make sure you buy a tube of silicon to complete the job. 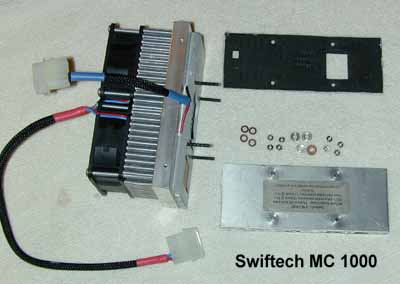 I used a naked SL2W8 to see what the MC1000 could do. This chip runs fine at 450 and 504 air-cooled with a good P3 cooler – I had been using the Vantec P3D 5030 (Review Here). Mounting it on the MC1000 is very easy and totally secure; I especially like to use bolts to mount CPUs to heatsinks as you can adjust them very easily. The MC1000 did not disappoint – the mounting system is well thought out, easy to adjust and keeps the CPU’s core in solid contact with the peltier.

In this instance, condensation is not an overwhelming issue as the CPU core under stress is above ambient temp. At rest without running Waterfall, temps were 21 C; with Waterfall running it was 4 C. Using CPU idle programs like Waterfall is not recommended as it could lead to icing if the insulation seal is breached. In addition, the thermal stress with temps ranging from 4 to 29 C is not conducive to long CPU life.

In sum, the MC1000 is a well built and well thought out peltier system. For CPUs “on-the-edge,” the MC1000 can be the means to get you to the next performance level. Whether the performance increase justifies $119 is up to each to decide.

An aluminum unit that might be a good price/performance buy.–Joe