SUMMARY: Taipei – one of my favorite cities – what New York City may look like in 200 years. 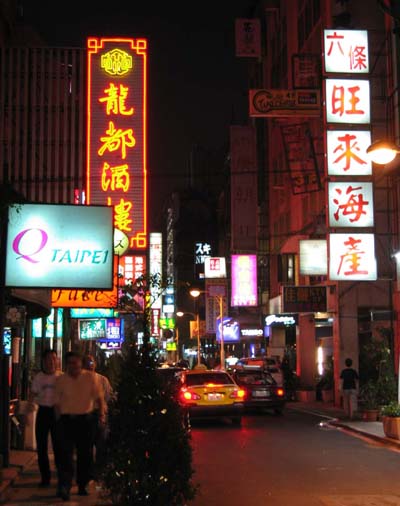 Taipei is a great town – lots of good restaurants, not overly expensive, great people and interesting sights. For a PC hardware geek, Taipei is the mother lode – it all starts here. I took the time this trip to do a bit more sight seeing than on previous trips – one thing I did was to take some panoramic pics at Landmark Taipei Shin Kong Observatory: 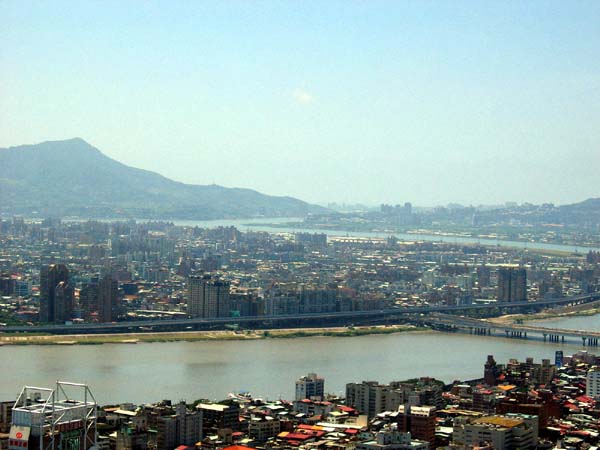 Taipei sits on a river and there are mountains on most sides: 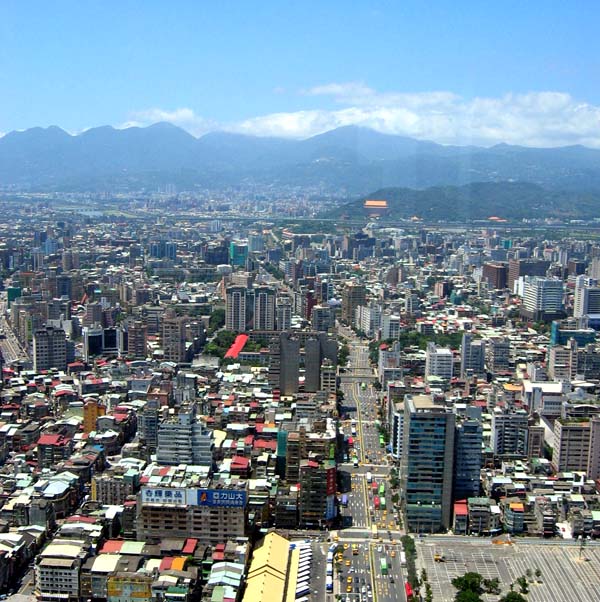 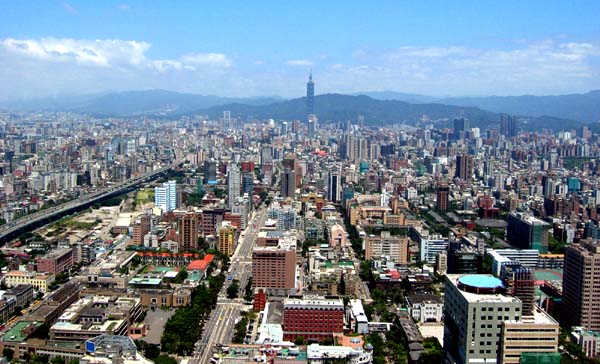 The dominant transportation mode seems to be motorbikes: 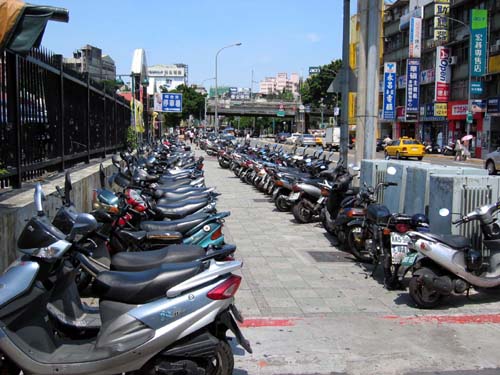 I came across this Temple while walking around: 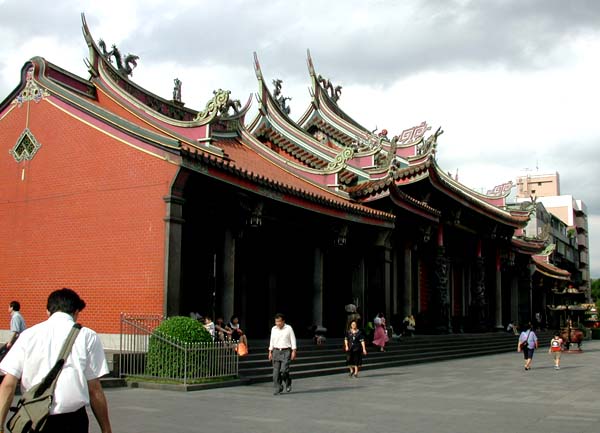 Inside, people were undergoing what looks like a purification – incense sticks were moved around one’s body: 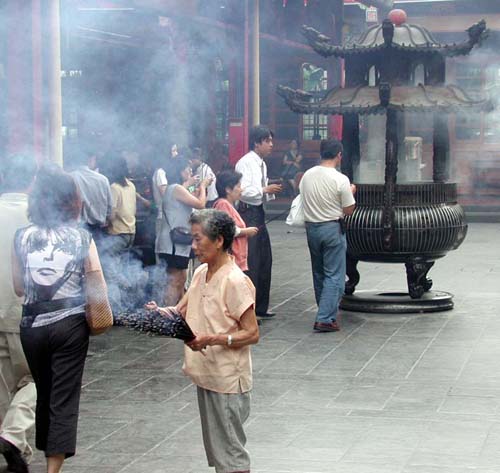 The other temple I visited was the Chiang Kai Shek Memorial Hall: 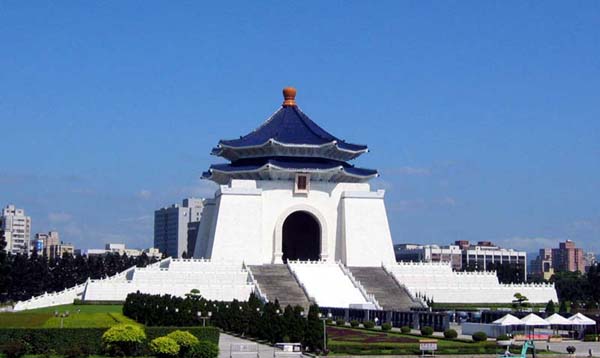 Inside is a series of exhibits chronicling his life. One of the buildings on the grounds is the National Theater: 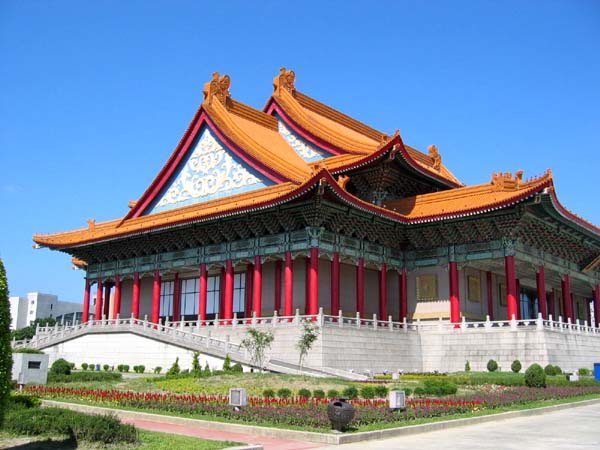 NOTE: The camera I used was a Canon S400 Digital Elph.

One of the things I love about Taipei is the proliferation of stores: 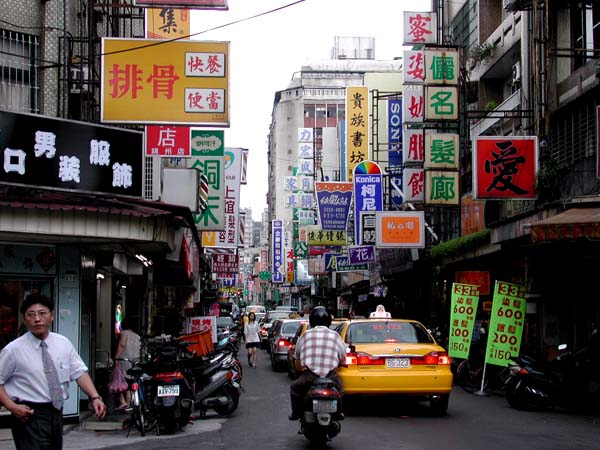 Private enterprise is alive and well here. People work long and hard – it’s not uncommon to see stores open 7 days a week and long hours. In addition to local stores, the usual beacons of civilization are in full sway: 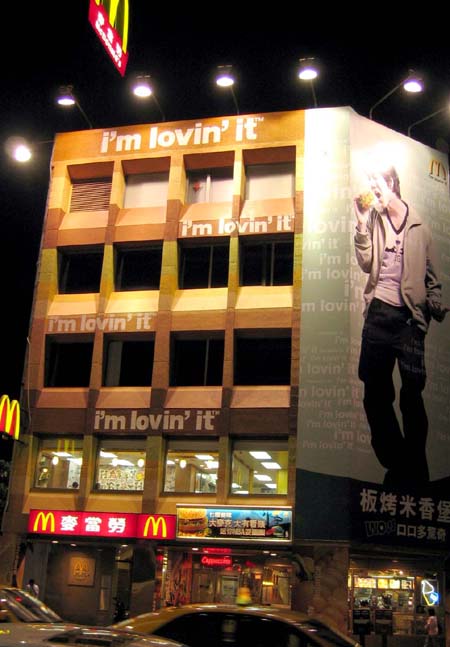 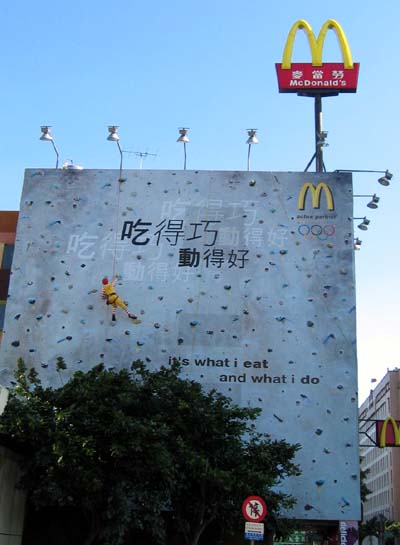 Lots of mixed signs – English and Chinese; most of the major street signs are in both languages. One of the more interesting things I noticed is that 7-11s are almost on every street corner: 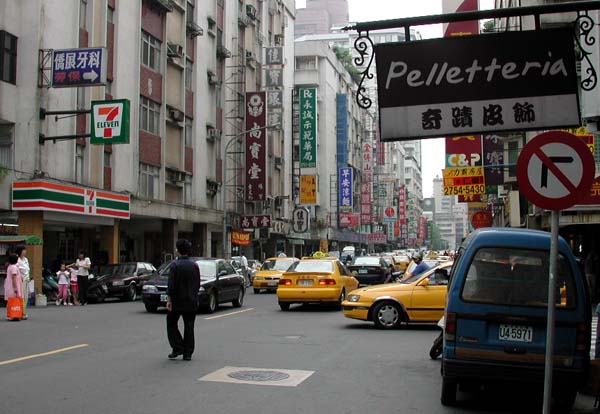 There are so many that you can send packages among them – a neat way to send intra-Taipei packages.

I did see more than a few Starbucks – I also saw the local variant: 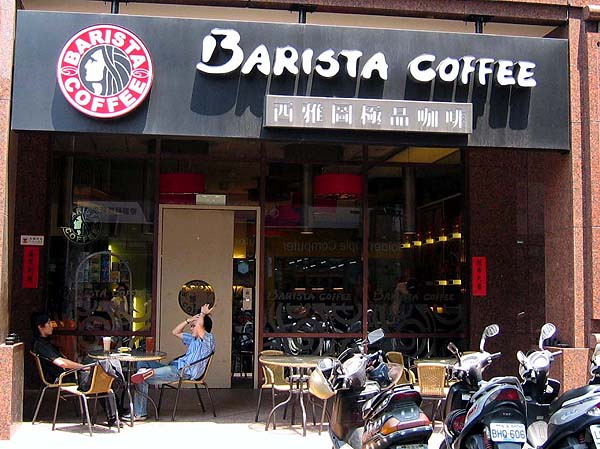 Aside from the Barista sign and logo, you’d think it was a Starbucks. And speaking of signs, there are some that just don’t translate well: 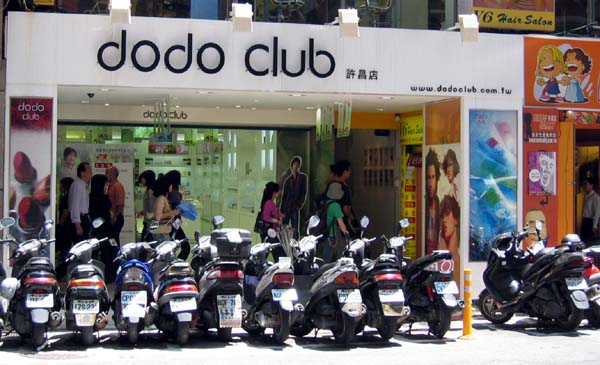 And there are some that are, well, inscrutable: 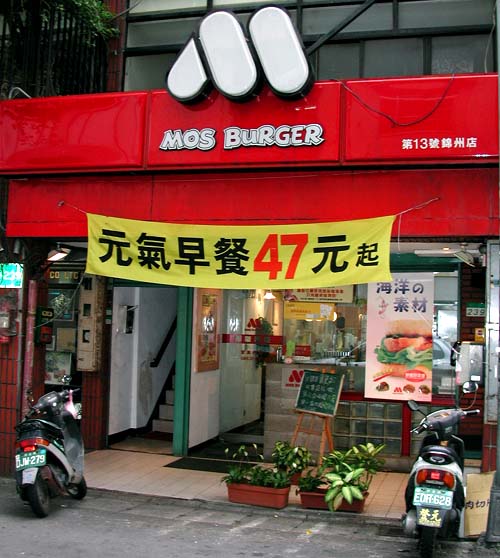 As best I could figure, a Mos Burger¹ contains seaweed and rice – kind of “mossy”. Some signs are a bit misleading: 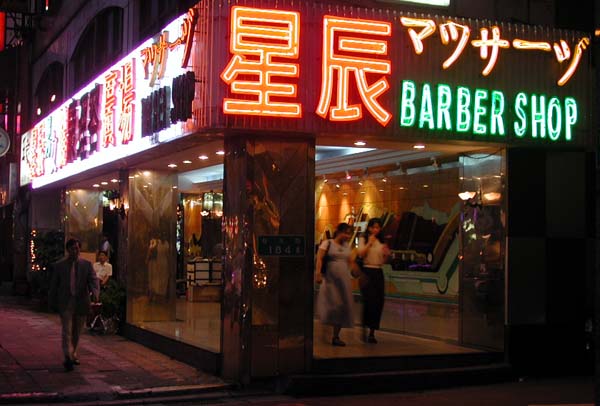 This is a LOT more than just a barbershop.

¹Paul enlightened me on this one:

“MOS Burger is a Japanese Burger Chain; you should’ve tried their shrimp croquette burger, it is fantastic. Same with Seven Eleven, it is a Japanese variant, as is the inter-shop shipping. In Japan you purchase tickets, goods, you name it and they are delivered to the nearest “Conbini”, as convenience stores are known.”

“MOS Burger stands for Mountain, Ocean, Sea, and is a Japanese answer to McDonald’s… orders made fresh, not stale pre-made, the fries are thick cut and less salt than McD, they feature American style hot dogs and burgers and fried fish and chicken cutlets with a lite Jalapeno and chili styles, or straight horseradish and mayo tastes, in addition to some sea-vegetable wrapped rice-burger entrees. Top it with onion rings and fresh salads with vanilla, chocolate or coffee shakes, and you have a classy yet slightly less-fast fresh and delicious menu.”

Thanks to you both – next time I’ll try them out.

On Bade Road is the “Computer Store Street”: 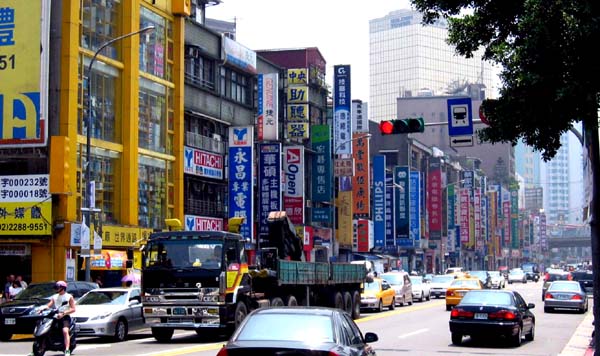 There are a plethora of small stores all vying to sell computer gear; one example of the sheer number of stores is the Rainbow Mall: 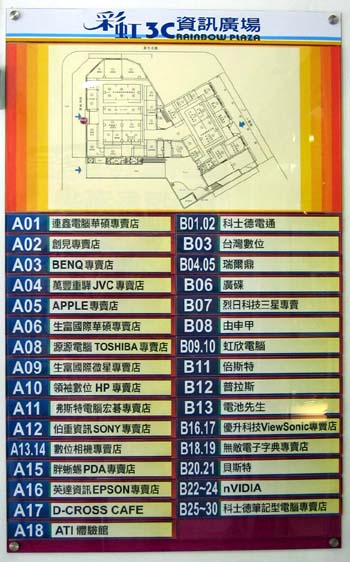 A whole host of small shops – shoehorned into small spaces are more stores: 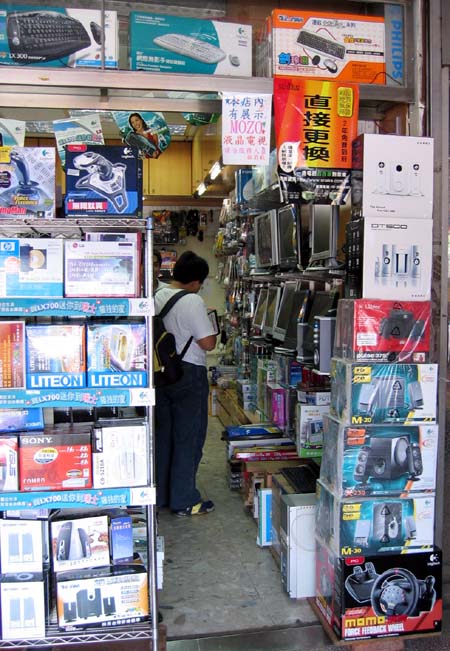 Some shops seem to specialize – want a case? 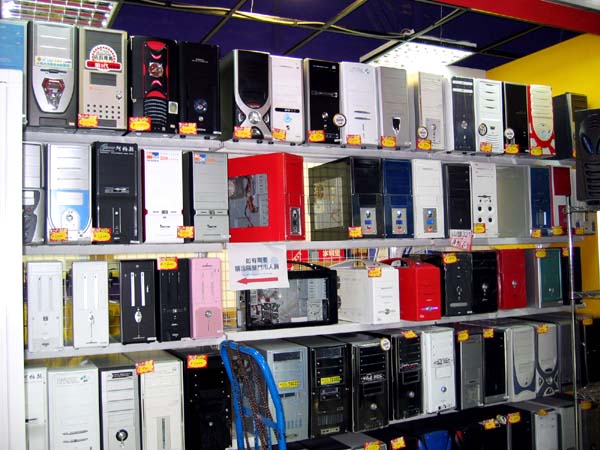 And down a couple of stores is another: 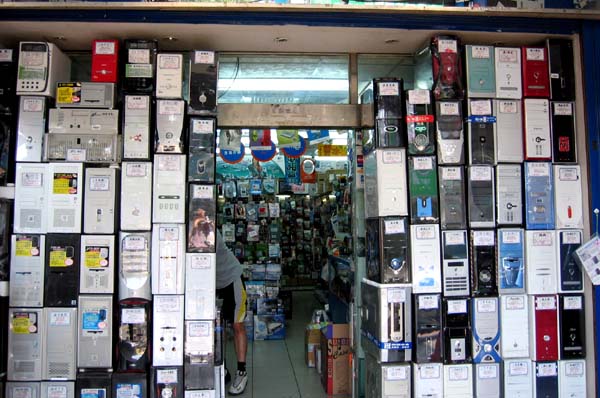 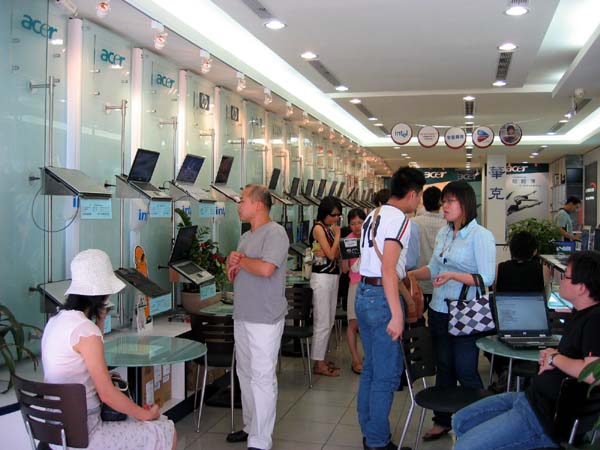 And lots of competition: 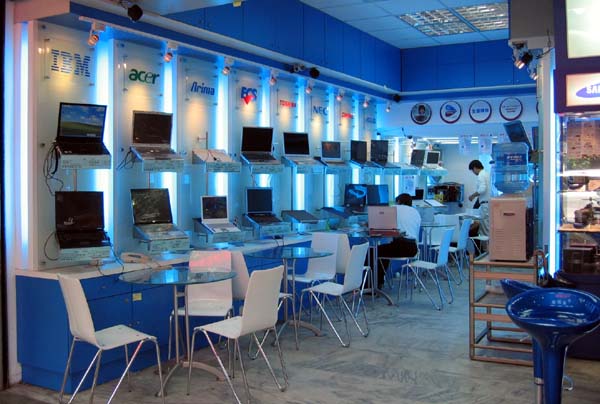 If you ever get the chance, Taipei is worth a visit. The people, the culture and the sights are a treat. The food selection is surprisingly diverse – I ate very good Italian, German and Thai in addition to Chinese and Taiwanese cuisines. If you’re adventurous, the local noodle shops cost under a dollar US for a filling meal.

It seems that Senator Orin Hatch hit a raw nerve with his comments about damaging computers. For some reason, the thought of getting arrested or sued for MP3ing doesn’t bother people, but the thought of one’s computer being zapped does.

If you want to talk about unlucky SOBs, one guy actually had this happen to him. He lived in Nagasaki and was visiting Hiroshima when the first A-Bomb was dropped. He survived that and went home to his family. If

A Note To Microsoft

Microsoft has begun its “swap for Windows XP Pro 64-bit” program. There seems to be a few bugs in the webpages covering it, though, which led me to send this email to Microsoft (links added to original): Your website offers