First of all, let me explain my situation:

I’m a student at university here in the UK, and at the beginning of all three terms each year I have to move all my stuff from home to my room at college, and vice versa, at the end of term. For the last two years I’ve been using my computer from home at college as well – in my first year, this was a watercooled full tower, and in my second year it became a watercooled Globalwin 802 mid tower.

However, much as I love watercooling,

(and every now and then the vibrations from the long car trips would start a leak in the watercooling system, which I would have to fix). So this summer, I began to look around for a more elegant solution, and pretty soon decided that I had to get me a Small Form Factor (SFF) comp, both for portability and just to save space in my room.

Probably the most well known manufacturers in the SFF market are Shuttle, with their series of barebones PCs. I particularly liked the SS51G, but unfortunately it was a bit too expensive for an impoverished student. Knowing that my parents were going on holiday to America to visit my aunt in September, I began scouring the internet for deals in America on SFF boxes.

Eventually I found an alternative to the SS51G – the AMS GBox. Normally this would cost more than the SS51G (I think about $320 new), but I found a refurbished one on Newegg for $239 + tax.

It doesn’t support 533 FSB CPUs (the Shuttle does), and has more limited overclocking options (max FSB of 120, increments of 3-4 MHz), but most importantly it does have an AGP slot (like the Shuttle) and I couldn’t say no to that price!

So for a final cost of £169, I got a spanking new shiny aluminium case not much bigger than a shoe box and about twice as high: 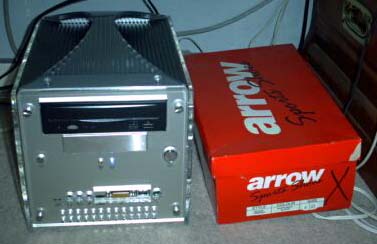 If you’re wondering why the drive is black, it came from my old globalwin 802, which was black. I kinda like it like this anyway, so I don’t think I’ll be changing the faceplate.

When my parents got back from the USA, with the GBox (hi mum, dad, have a good holiday? Now, where’s my computer!), I was surprised to find it in full retail packaging with all accessories – I was expecting brown-box, OEM stuff as it was bought ‘refurbished’, and Newegg said it would be as if OEM. Cool! 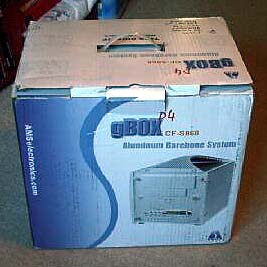 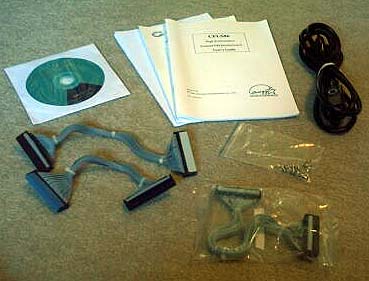 Nice rounded cables – good idea in such a small case

I finally got all the hardware installed, pressed the power switch – and the damn thing refused to even spin a fan up! No sign of life, nothing. Hmm, so much for refurbished?

Well, beginning to panic and thinking the mobo or PSU might be dead, I pulled out the PSU and tried powering it up with the paperclip trick (use a bent paperclip to short the green wire on the ATX connector to ground – any black wire will do) – and it worked fine.

So I thought maybe the mobo was shorting out on the case and spent the next ten minutes frantically unscrewing everything in sight in a bid to remove the mobo (it’s a bit of a tight fit in there!).

When I finally had it out, lying on an anti-static bag, I plugged in the switch connector and the ATX and P4 power connectors, and pressed the power switch. I was rewarded with the sound of fans spinning up! You have no idea how good that feels!

So I found a spring around the V-port for video ouput on the back panel, which is obviously meant to keep the backplate pressed up against the back of the case – it looked as though it might have been shorting the mobo. I took it off, put everything back into the case and this time it worked! I don’t know for sure whether the spring was the culprit, but it doesn’t seem to be missing it! 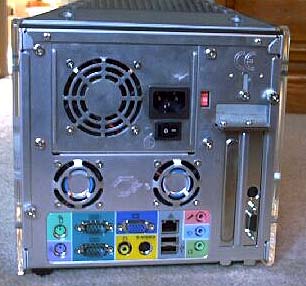 The V-port is the left of the two yellow connectors

I guess that was why it had been sent back to Newegg and was ‘refurbished’ – probably whoever bought it thought it was dead when they couldn’t get it to power up, and it probably worked fine when Newegg tested it. So for someone else’s failure/inability to troubleshoot the problem successfully, I saved myself about 40 quid. This paid for half of the P4 chip to go in there – always nice to be able to save some money.

Here’s some shots of the GBox with all the hardware installed, so you can see just how cramped it is! 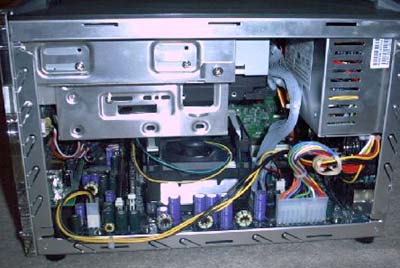 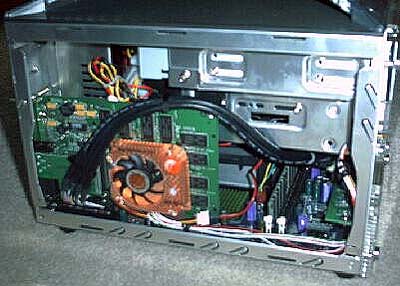 …and from the left.

Yes, it is a GF2, but notice the GF4 cooler from Thermaltake? I did have a big Pentium hsf glued to the card with Arctic Silver epoxy, but obviously that wasn’t going to fit in this case, so I had to shop around for a slimline GPU cooler.

The Thermaltake fitted the bill perfectly, though there’s only a few millimetres clearance between the fan and the side of the case. A mod for the future will be to drill some holes in the side panel (like the ones at the bottom of the front panel) to allow the fan to breathe. I’m not actually having any heat problems with the card at the moment, but the overclocker in me doesn’t like to suffocate the hsf like that!

A word of warning about graphics cards though: All the reviews I’ve seen have mentioned that GF4 cards seem to block access to the first RAM slot as they’re so long – if anyone cares to send me a GF4 so I can test this theory, please do! (j/k)
{mospagebreak}

The problem I was now having was that with the OEM hsf (the GBox comes with one, but it was a little too noisy for my liking – I was trying to build a pretty quiet box) I was getting load temps between 58-62 C. Way too hot, and I couldn’t even OC my 1.8 to 1.84. So I started thinking about ways to cool it better… 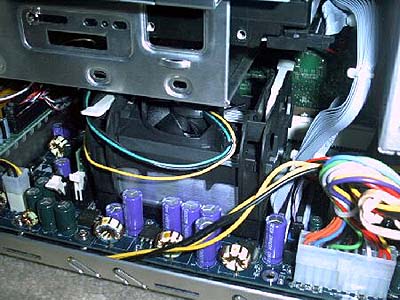 You can see how cramped it is around the hsf!

For the record, I measure the height of the drive bays above the CPU as about 6.5cm, so one day I may try installing something a bit better than the OEM hsf – like an Alpha PAL8942 with a slim 80mm fan on – under 6cm tall with a 1.5cm thick fan, but I’ll have to double check that there’s enough room before I splash out the 40 quid for the bare heatsink!

Note that I’m not using a floppy drive (no need!), so I’ve installed the hard drive in the upper 3.5″ bay to allow the CPU fan a bit more room to breathe.

For standard cooling, the GBox has two 40mm exhaust fans and a 60mm fan in the PSU, all sucking air out of the back of the case. I figured that even with the holes at the front of the case to allow ventilation, there was no way enough cool air could be getting into that case.

So I looked for somewhere to mount an intake fan and eventually settled on the right hand panel, near the front (the left side is blocked pretty well by my GF2 card). I set to work with my Dremel cutting a blowhole (or suckhole?) and mounting the fan: 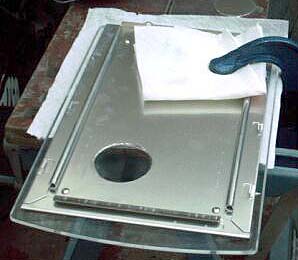 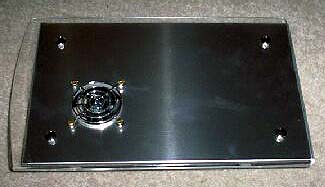 Finished – thank God I didn’t scratch that aluminium at all!

Turned out that little 60mm fan was a fair bit louder than the rest of the system, so I added a 24 Ohm rheostat to slow it down a little and stuck this to the back of the side panel with some parcel tape and some blu-tac to stop it shorting out on the case: 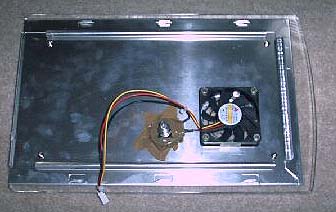 Not exactly pretty, but it works 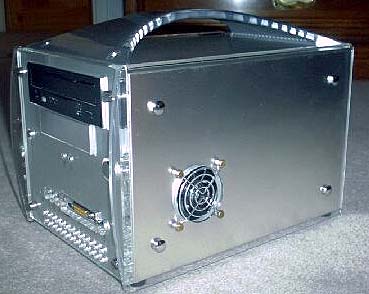 With this mod completed, the GBox is only a little noisier than before, but my load temps have dropped to 46-48C max. I once saw it get to 52C, but I think that was before the thermally controlled fan on the hsf got going – or maybe my room was just hotter than usual. Still, it’s a reduction of at least 10C over my previous temps, so I’m pretty happy.

And that P4 now overclocks to 1.95 GHz quite happily – I’ve run it at 2.05 for a few days folding and stuff, but it did crash after playing Warcraft III for a few mins, so it doesn’t quite seem stable in 3D apps (unless it’s a driver problem – something I’ll have to check).

I also think it’s memory, not heat or lack of voltage (no Vcore adjustments in the GBox, though I could try vidpinning) that’s holding me back, as I can get to 2.1 GHz by setting the memory timings back to 2.5 from 2. I’ll keep on tweaking and see what I can come up with.

Just to prove that small systems don’t have to be slow, here’s my current system specs:

I hope this has been interesting and not too long (I just had too much to write!) – if there’s anything you’d like to ask, feel free to email me or drop me a PM in the Overclockers.com Forums – I go by the unimaginative nick of Rob Cork. I’m kept pretty busy at college, but I drop in when I can – thanks for reading!

SUMMARY: Something to make life a little easier…. If you ever tried to pry out a 4 pin Molex plug in a tight space, you’re going to love this product. This is particularly handy for the “space-challenged” micro ATX cases,

We got a lot of responses to our inquiry about the AGEIA card last week, but just about all those responses said just three things: 1) Pay $200-$300 for it? Well, the more positive reactions went like this: The less

I went looking for a Santa today. I wanted him to give me a C1 stepping chip. I went to three retail stores. I hate going to computer stores, because I know what I am likely to get before even