The 72-7712 Digital Thermometer from Tenma Test Equipment is a dual thermocouple meter with internal logging capability, USB output for saving logged data, and software up-link.  This unit can become an integral part of a PC testing arsenal by allowing for isolation of case hot spots, heat sink testing, and liquid nitrogen/dry ice work. The limitations start to change and the performance bar can be raised when you know where it is hot and where it is not.

The graph capabilities of the 72-7712 software are not phenomenal, it does however serve the intended purpose. Though dual software readout (T1 & T2) would be preferred; the logging capacity and decent feature set, as well as an Excel export feature make up for the software weaknesses.

By pressing the T1, T2, T1-T2 button on the meter your view will also change on the software output screen.

Pressing again will display the variance on the software output screen.

XLS output is a useful feature.

The thermal conductivity of the heatsink material is an important factor in air cooling. Copper and aluminum are the most widely used materials in PC HSF (heat sink & fan) construction. The thermal properties of these two materials are critical to proper cooling of the processor. The chart below shows the thermal conductivity of materials for comparison. The only three that matter for this testing are aluminum, copper, and air (water and the other items may be of interest to those who like to get a little wet).

Copper: 56.8 seconds to reach maximum efficiency with a variance of 3.9 degrees centigrade

Aluminum: 59.8 seconds to reach maximum efficiency with a variance of 7.9 degrees centigrade

This is the point where temperatures stabilize (temperature increases are such that after a pre-determined amount of time, ~20 seconds in this case, there is no change)  and heat is dispersed through natural convection. Although this was not the most rigorous and scientific test (not all variables were controlled) this test does show that copper will transfer heat faster and more evenly. A two minute test of both materials (copper and aluminum) showed a 3.7 degree centigrade variance, copper being hotter (this is good, it means it will draw that much more heat to be dissipated). It must be taken into consideration that these heat sinks did not have a fan and the variance may have been different during operation.

If the HSF is not equalizing temperatures within a reasonable variance or running 10+ degrees above ambient case temperature (check the temperature at the intake area of the HSF to eliminate the possibility of a hot spot causing the problem), then a re-seat of the HSF may be needed and possibly a replacement HSF of higher quality may be in order.

The setup: thermocouples were inserted in aluminum transfer blocks alloy for accurate temperature measurement without the risk of potential damage to other costly components. 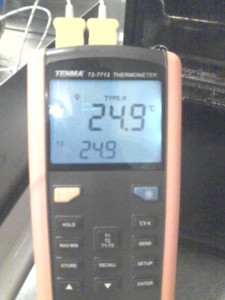 Temps after ~5 min. This is a level playing field.

This shows the HSFs ability to pull off heat, notice that the stock HSF just can’t compete. Powering up the fans shows how well each can dissipate heat:

Video-Dissipation after fan power up

What Else Can You Do?

One simple idea for improving the PC enthusiast experience is to check the case for hot-spots. Keeping your entire case as close to ambient as possible is probably the most important thing that can be done to keep the HSF operating at its maximum efficiency. A heatsink can not lower temperatures below case ambient and will usually level out 4 to 12°C above case ambient no matter how much money is spent on it. By identifying hot spots, proper fan placement can be made. Although these areas may not seem relevant to CPU cooling, they are. Air circulating throughout the case creates eddies (a current of air running contrary to the main current; a special case is a circular current, whirlpool) which remain hot and by cross circulation make  air around them heat up. Working in a similar fashion to the eddy, dead zones (hot area where there is no mechanical air circulation) may seem harmless, but it is critical to circulate or eliminate this air to alleviate convection (heat transfer in a gas by the circulation of currents from one region to another). For dead zones, a fan may not be an option and directed air may be needed. If directed air is not possible, then closing in/sectioning off this area may be the only option.

Knowing where the hot areas of the case are located allows for fixes that otherwise would not be possible. Gathering information with a good temperature meter will help guide the process of lowering case temperatures and in turn allow for a cooler processor, memory, and hard disk drive.

Using a dual probe temperature meter with capabilities comparable to the 72-7712 is a definite step up from the volt meter type single probe units that were used in the past. With the data logging capabilities and other features available with this unit, it is much easier to maximize case cooling and potentially gain a few hundred MHz from a heat limited overclock.

With acceptable quality, useful software and adequate features the 72-7712 makes an excellent addition to the tool box of the overclocker, enthusiast or small PC mod shop.

The firm known as be quiet! is on a roll. Today we are looking at a unique heatsink, one that has a pair of tandem fin stacks. But the fin stacks are set horizontally while the fan or fans blow downward, washing the motherboard and RAM with air. Wonder if it works? Let’s see!

Enermax introduces an inexpensive case, the COENUS. Where did they get that name? According to Wikipedia, “Coenus (in Greek Koῖνος; died 326 BC), a son of Polemocrates and son-in-law of Parmenion, was one of the ablest and most faithful generals of Alexander the Great in his eastern expedition.” With a warrior’s helmet in the logo, they were clearly referring to that kind of excellence. Is this case “one of the ablest?” Let us see.

G.Skill continues to release new DDR4 memory kits for Intel Skylake platform and of course we are happy about this fact. After a great Ripjaws V series we have a chance to test Trident Z whose design is simply exceptional. In this review we will present probably one of the most interesting memory kits for computer enthusiasts and gamers, the Trident Z 2x8GB DDR4-3200 CL16. Stay with us to find out how much you can expect from this memory and why it’s one of the best options on the market.

Very nice equipment, great article, I like to see the upgrade. It is nice to have secondary data points to get a whole picture.

I like the "T" Type for sink and grease testing as it is smaller and less intrusive for holes drilled in sinks or grooves cut into the IHS.

Ambient at the fan to Intel spec will help nail the temps to an even finer resolution.

Another thing you can do for case cooling, something we use on consulting projects.

Remove the side panel and replace it with a plastic panel that has small holes drilled one inch apart in a grid pattern across the whole sheet.

Attach the thermocouple to a round stick (I use wooden shishkabob skewers) and mark the length in one inch increments.

Start at a point on the grid and measure 1 inch depth, 2 inch, 3inch etc. till you reach other side, now move to the next grid point.

This will give you a full 3 dimensional thermal profile of the case helping to troubleshoot and identify hot spots, dead air or recirculating air.

There are air probes you can use also but if its hot thermally chances are you have located a low air flow point anyway, the exact number is not that important 99% of the time.

I will have a review of the Cooler Master V6GT up in a few days that has a little more content on the pan test as well as a link to an article specifically on the test.

We need multipage ability, these things can get long.

Out of curiosity, is the data format truly in xls format, or is it a simple tab-delimited text file (or comma-separated, etc.) with the extension changed to .xls to force an association with MS Excel? I've seen that in lots of technical software: just rename it to <filename>.txt, and it pops open just fine in any old text editor.

If it is truly writing in the binary .xls format (with all the extra formatting for the file header structure, etc.), then that's too bad. There's no need to tie to a relatively complex proprietary format when it really is just text data at the end of the day.

Out of curiosity, is the data format truly in xls format, or is it a simple tab-delimited text file (or comma-separated, etc.) with the extension changed to .xls to force an association with MS Excel? I've seen that in lots of technical software: just rename it to <filename>.txt, and it pops open just fine in any old text editor.

If it is truly writing in the binary .xls format (with all the extra formatting for the file header structure, etc.), then that's too bad. There's no need to tie to a relatively complex proprietary format when it really is just text data at the end of the day.

I will have to check.

I will have to check.

Thanks, and do let me know. Data portability is nice, so I'm certainly curious.

Thanks for the link. It's nice to see the new equipment at work.

One thing I noticed: the link reference here:

Using a pan and riser made for testing heat sinks on a conventional heat source (described in more detail here: Testing)

is either very slow or dead.

It would be good to link to the OC forums article here. Sort of like the "methods" paper that we'd always refer to in our later journal articles. :-)

Thanks for the link. It's nice to see the new equipment at work.

One thing I noticed: the link reference here:

is either very slow or dead.

It would be good to link to the OC forums article here. Sort of like the "methods" paper that we'd always refer to in our later journal articles. :-)

I had problems with the site earlier but it seems fine now.

@macklin01
Link post 13
Here is a file exported from the meter to the included software and then xls.