When the V6GT arrived at my doorstep, I was not sure what to expect. Thinking back to my first purchase of a high-end heat sink, the Cooler Master HHC-001, I guess I was expecting to be astounded and deafened. I did not go deaf and though not astounded I was satisfied with the performance. With a long list of award winning products and 10+ years of solid product history Cooler Master has developed the know how to get the job done and keep customers happy. The V6GT is not an exception to this winning record – with a push/pull fan setup, a well designed tower cooler at its heart, and great looks it can’t get much better. 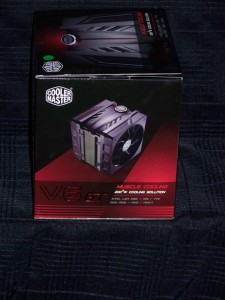 Packaging was very colorful and showed the product very well. 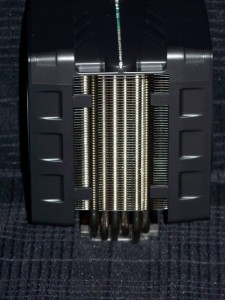 The enclosure (shroud) around the cooler looks nice but may also slightly impede performance – this will be covered later. 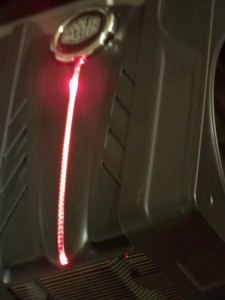 The light down the center top of the HSF is an excellent touch for fans of case lighting. The light is powered via a separate MOLEX connector. 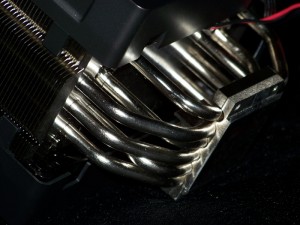 The looks of this HSF are top notch, but I have to wonder how much the plating impedes the performance of any HSF, although this sort of plating is common.

There is one issue that can not be overlooked and must be addressed before all else: this cooler will not allow access to all memory slots in many mainstream motherboards. At worst you may not be able to install any memory. It is possible that there is some low profile memory out there that can be used, but then what would be the point of this cooler? The ASUS and Gigabyte examples below are both current mainstream boards. The ASUS is a LGA1156 P55 board and the Gigabyte is an AM3 890GX board. These boards are both very popular with overclockers on a budget so this large cooler may present problems.

The GT does a decent job of cooling an overclocked CPU, however the press release stated:

“The Xeon X5670 processors were overclocked to 4 GHz, yet the V6GTs kept both CPU’s at sub 70 °C, and the i5 655K was overclocked to a massive 5.269 GHz under 66 °C, even during extended periods of extreme benchmarking at these high clock speeds.”

This was tested at 4.45 GHz on an Intel Core i5 661 using an the ASUS P55 mainboard with room temperatures never exceeding 24 °C. The cooler performed fine, except in OCCT linpack. The voltage and settings could have been tweaked to lower the temps a bit, but after reading many reviews of this CPU and some testing myself, I just find the 5.269 GHz a little hard to swallow at normal room temps, though I could be wrong.

There has been a lot said about the Athlon II X4 being a hot chip. The V6GT did a very good job of taming that heat up to 3.8 GHz at 1.6 V. The heatsink temperature was checked at each fin on each side at every slot. Placing thermocouples at various points helps identify possible manufacturing and design flaws. 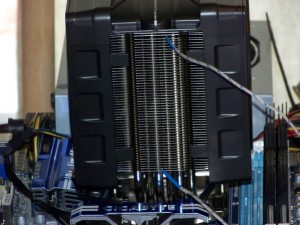 One thermocouple was attached to a heat pipe near the base to act as a control, another thermocouple was used to measure air temperature and the datalogging dual head temperature meter is used to check the temperatures at all points. The T1 thermocouple is placed at the lowest point nearest the metered heat pipe and T2 thermocouple is used to probe the rest of the HSF.
What would show up as an extreme variance on the low side (typically 5-7 °C for example) would indicate poor material contact between the heat pipe and one or both of the fins touching the thermocouple. If all of the fins showed this large variance from the heat pipe, then there is the possibility of a major manufacturing defect: something is out of tolerance. However, I could find no obvious flaws with the sink itself.

Temperatures were great up to 3.8 GHz; with an idle temp of 21 °C on the cores and a torture temp of 42 °C this HSF competes well with all but the most extreme HSFs. The maximum variance during a torture and stability test using OCCT linpack and WCG BOINC was 3 °C showing the effectiveness of the contact between the base, pipes and cooling fins as well as heat pipe efficiency. 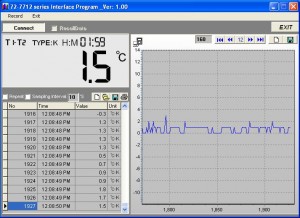 Setting up a small comparison test with a Thermalright Ultra 120 Extreme and ThermalTake 78 CFM fan was probably the highlight of the testing.
Using a pan and riser made for testing heat sinks on a conventional heat source (described in more detail here: Testing) many observations can be made and conclusions reached.

When everything is hooked hooked up and ready to go the heating process begins.

When a humidity level of 90-100% is reached and the temperature reaches 70 °C +2-0 everything is started up and the monitoring begins.

The shots above show the cooling process and the one possible flaw with this cooler. Thermocouple 1 was measuring the temperature of the V6 while thermocouple 2 measured the temperatures of the Ultra 120. Because of the insulating factor of the shroud, the V6 started off at a 2 °C deficit, yet managed to close the gap and surpass the Ultra120 in 3 minutes. This can most likely be attributed to the push/pull design of the unit as well as a superior fan blade design .
Following the cooling process the gap is closed a bit, but even after 20 minutes the Ultra120 has not caught up.
What can be gathered from this test? A couple of things. The first and most important is a HSFs ability to dissipate a given amount of heat. This is directly related to one other important thing; how well the cooler can deal with rapid CPU temperature changes. This test also shows that the shroud may present a flaw. It works two-fold, at low RPMs it can work as an insulator of sorts and at high fan speeds it can cause turbulence, but how much? I didn’t investigate any further: it looks good and the cooler will still do the job.
The noise from the cooler was not covered here because it is often a very subjective topic. Depending on your usage pattern and your noise tolerance it could be considered too loud, but there again a vibrating case is much worse as the sound of this unit is not annoying, it is just there.

Like everything manufactured today, compromises are made in design and/or performance to set a product apart from the competition. Though there are many users out there who simply prefer the “tower of power” or the aesthetic appeal of neon lights and case windows, they are not the largest segment of the market. Young users (not in age, but in experience and know how) – evolving enthusiasts, if you will – are the largest segment of the market. If you are into extreme air or blazing fast memory this product will probably not suit you. If you are new to the game and want to dabble with a little overclocking as well as get a nice upgrade then this cooler has your name on it.

As any gamer knows, one of the most important parts of your success in gaming, especially in a first-person shooter, is your mouse.

It seems gold is the durable good everyone is trying to get their hands on, at least when it comes to 80 Plus Gold certification!

Thanks, I try and look at things a little different.