“People don’t understand me…” Mr. Orb informed us, “I never meant to hurt those CPUs. I just did not know how strong I was” he said.

“Cause of Death: Crushing, due to an inhuman embrace.”

The sterile language of the Coroner’s Report hardly conveys the sickening sound heard as life was crushed out of the victim. Those who witnessed the act still shudder at the scene: Mr. Orb, called to tame the raging fevers of the victims, arriving and appearing as an angel of mercy. Then, with incredible swiftness, Mr. Orb’s friendly embrace turns into a death grip, crushing the life out of its victim.

“I still can’t sleep at night” is a common refrain heard among the grieving. “I mean, we let him in, we TRUSTED him to help.” Shocking!

Mr Orb, in an attempt to reform his ways, left the country and underwent corrective surgery. The results are shown below: 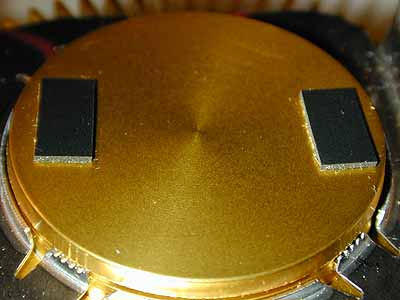 Surgeons at Johns Chipkens are confident that they have succeeded in taming the murderous embrace. In addition to the above, surgeons also sought to eliminate some muscle tissue: 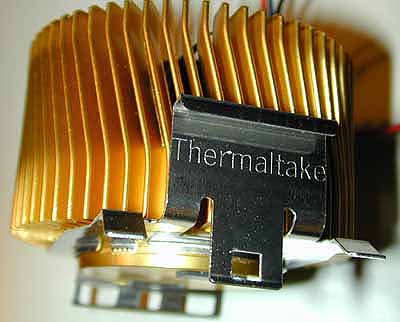 How well did they succeed?

This reporter warily introduced Mr. Orb to his beloved Duron 650 @ 900, 1.85 volts. Very carefully, I allowed Mr. Orb to embrace Duron. While still strong, it was clear that the surgeons had indeed corrected some of Mr. Orb’s previous “problem.” Mr. Orb’s embrace is still firm, but not as crushing as before.

The Duron’s fever was lowered to 54C/129F; unfortunately, even though Mr. Orb is better behaved, his ability to reduce Duron’s raging fever is still not as good as some others, most notably Mr. Alpha PAL6035.

Mr. Orb proved reluctant to release his amorous embrace of Duron, although with some persistence, this reporter did successfully separate the two. However, if Duron was in a confined space, Mr. Orb would embrace Duron with some difficulty and separating the two would have proved very difficult.

Can we say Mr. Orb is, in fact, cured? This reporter believes he is on the road to recovery, but there are better cures for Duron’s raging fever. A close relative of Mr Golden Orb, Mr. Silver Orb, may prove to be a better cure; we have an appointment to interview Mr. Silver Orb in the near future.

I read your article on the ORB mounting, so I thought I would shoot this at ya. A buddy of mine purchased 10 of the Panaflo Orbs from a catalog (don’t remember the name) for 5 bucks a piece. I