Still lots of life in this “dated” heatsink. — Joe 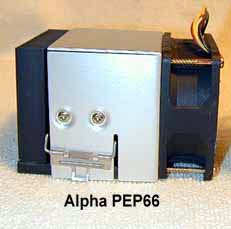 Some folks emailed me to ask how Alpha’s PEP66T would stack up in the Heatsink Ranking. I thought I didn’t have one to test, but as I was moving things around, I found one still in the box – heatsink archeology!

We’ve done a number of articles on the PEP66:

You can update the PEP66T to use on any socket, so let’s see how this old guy is standing up:

The PEP66T I used was not modified to stand the fan upright. The tests below were with the fan blowing out, not into, the heatsink. I used a Delta 38 for this test – I measured fan noise at 67 dBA (Radio Shack sound meter 8″ from fan intake).

The PEP66T was first tested on the CPU Die Simulator which gives results that are unaffected by motherboard influences. I then tested it on a Shuttle AK31 as an example of what users might see on their systems.

Die Simulator results place the PEP66T in the upper ranks of heatsinks (Heatsink Ranking) – a very good showing for any heatsink and quite remarkable for this “ancient” heatsink!

If you have one of these, don’t be so quick to consign it to the scrap heap. Alpha’s PEP66T is still a formidable competitor, although using a Delta 38 does push its noise profile into the unacceptable zone, as it does for many others.

[Ed Note: Chuck sent me an email and I thought others would like to see his PEP66 MOD – Joe] 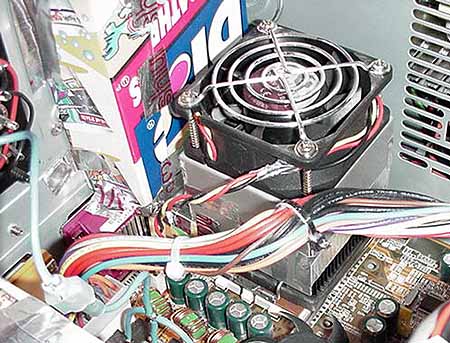 Yeah, I been wondering how the ‘ol 66 would rate. Thanks for doing the
check on the CPU Simulator.

I have mine “Mod’d” with the fan on top. The Delta was too much, so I
switched over to the YS Tech 26 cfm fan. The CPU was still on the warm side, so I had to do some rethinking.

The exhaust fan at the back of my box lined up with the heatsink. The PEP’s fins were also going in the correct direction, so I added a Pabst
fan for the exhaust and “Ducted” it to the heatsink. I used some “Duct” tape to create a smaller opening in the “open” side to increase air flow velocity over the heatsink.

The heatsink fan is blowing down and the Pabst is pulling from the side, as the pic shows. The duct is made from an old Dixie cup box and tape. Not the best pic, but you get the idea. I see temps of 41C/25C (105F/78F) under stress (1.84v). The Delta 38 temps were better, but I don’t have any records from when I had it on there.

The Delta just got too noisy to stand any longer – I had it on for almost a year!