SUMMARY: This 10mm, Delta 25 cfm 60mm fan opens some interesting possibilities for a space constrained heatsink like the Alpha PEP66T on some Socket A motherboards. Rotating ALpha’s shroud 90 degrees opens up more choices.

Some Socket A motherboards have enough territory so that you can use a large footprint heatsink like the Alpha PEP66T without any problems – the ASUS A7V is a good example. Others, like the popular ABIT KT7, are not so accommodating and require some careful planning if you have an Alpha PEP66T. 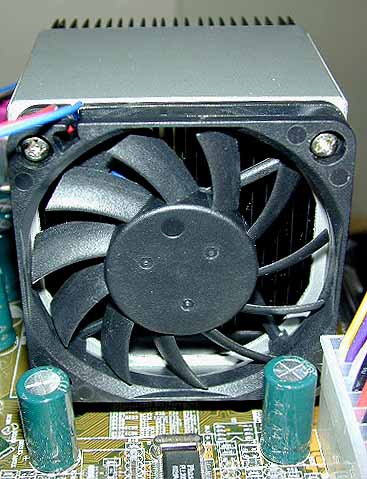 Tony at PHAM COMPUTER found a very thin (10 mm thick) 60 mm fan that might allow you to use the PEP on the ABIT, but just barely (see his results HERE). As the pic above shows, there is a capacitor and the power plug to contend with in fitting the PEP on the socket. As the close-up below shows, there is literally no room for anything more than a 10 mm fan. 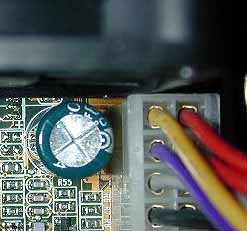 Tony tried this combo on the ABIT KT7 and thought it did very well; he sent one over to me to try out and confirm/reject what he found. The fan features 11 blades, draws 3 watts and spins at about 5600 rpm; all told, these numbers put it close to the YS Tech/Adda 26-27 cfm fans. I was surprised (and maybe not so surprised) to find that this is a Delta fan – the same company that makes the 38 cfm “Delta Destroyer”.

The fan is # EFB0612HHA and not listed yet on their website (HERE); however, based on data for this series, I estimated airflow at about 25 cfm (Note: This fan is labeled at .25 amps at 12 volts).

I proceeded to test out this little hummer two different ways – one with the PEP66T with its shroud in its “normal” location (as pictured above) and one with the shroud rotated 90 degrees. The latter configuration allowed me to test out this fan against three others of interest: The ADDA 27 cfm, the Papst 33 cfm and the Delta 38 cfm – a nice array of performance vs noise options.

Not good – the C/W is way too high for the PEP66. As I closely inspected the heatsink on the socket, I found that the fit to the capacitor and power plug was in fact too close – it interfered with a good fit on the CPU core and results were adversely impacted. I even tried fitting the shroud on the other side but had the same problem. Maybe Tony’s board had more “wiggle room” than mine.

Results are more along the lines of what I expected. Note that the Delta 25 did in fact turn out to be very competitive with the ADDA 27 cfm fan. However, as expected, as you increase fan power, results go up accordingly, although the Delta 38’s increased power and noise once again bumped up against diminishing returns.

The Delta 25 is a very nice, slim fan that should deliver performance perhaps a notch under YS Tech 26 cfm and ADDA 27 cfm fans. However, for use in tight areas, as a replacement fan for an anemic 60 mm on a so-so heatsink, or as a booster fan in a tight fit situation, the Delta 25 is an excellent choice.

Thanks again to Tony at PHAM COMPUTER for alerting us to this little screamer – a good addition to the cooling kit-bag.

The Net-N-Dude folks were kind enough to send me a Glacier 4500C with the Arctic Cap for a review; after this review, if they send me anything again I may have to have the bomb squad check it first. I’ve


How To H2Ocool Your Power Supply