SUMMARY: An OK Socket A motherboard – competent but not as feature laden as the ABIT KT7 or ASUS A7V.

SOYO jumped into the Socket A motherboard market with its SOYO K7VTA-B. It features VCore and Multiplier adjustments, so we bought one to test out.

The VCore adjustments appear to have an upper limit – I could not go higher than 1.85 volts on my T-Bird 750 even though adjustments ranged from -0.1 to +0.25 volts, added to the CPU’s spec voltage. Anything that yielded a CPU voltage greater than 1.85 defaulted to 1.7 volts. 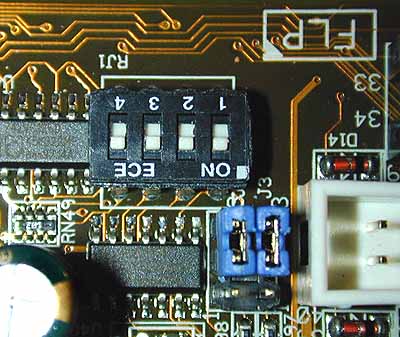 As the pic shows, the dipswitch is quite small. It’s located on the upper right hand side of the board’s edge near the hard drive slots. I don’t think adjusting this switch inside a case is something you want to do on a routine basis. 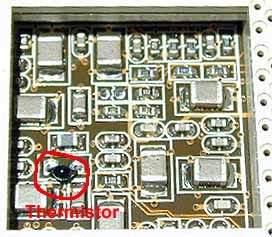 The socket thermistor is a disappointment – it is located off center and does not come close to the CPU. The problem with this is that if you enable thermal shutdown of the CPU should it get too hot, by the time the thermistor registers the overheat situation, the CPU will probably have fried already. I noticed a very perceptible delay between temps I monitored using a heatsink thermistor and what I saw on screen with Motherboard Monitor.

Now this may seem like a sniggly point, but the socket only has two lugs on each side rather than the three you see on other boards. I did not like this as I use the two end lugs to hold down water blocks with a double clamp. If you break off a center lug, you have to repair it rather than use the two end lugs. However, note that the lug’s orientation allows you to mount a PEP66T very easily with unimpeded airflow.

I was not overwhelmed by SDRAM BIOS choices – there was not the usual “Fast” or “Turbo” settings you see on many other boards. The choices were limited to running SDRAM at 100 or 133 MHz, settings by SPD or User. The user can set CAS 2 or 3. There are Interleave settings – I enabled 4-Way Interleave for all benchmarks. Although skimpy, memory performance was competitive.

One thing I have noticed in the heatsink testing we have been doing is that there are “secondary pathways” that impact CPU temps. One of these are the components you see arrayed around the socket. Compare what’s around the ABIT KT7 to the Soyo’s relatively cleaner arrangement, as shown below: 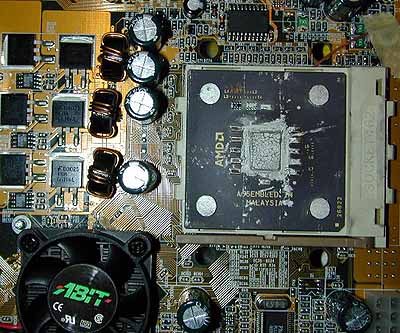 The ABIT board has a number of heat generating components close to the socket, most notably the VIA chipset and the power transistors. These heat sources warm up the board around the socket adding to the thermal load of the CPU’s heatsink. 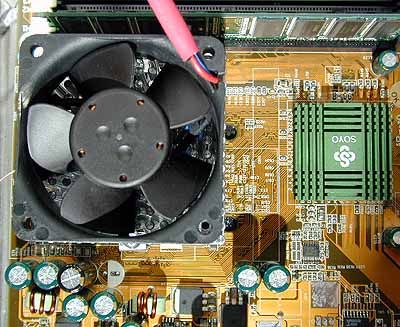 I felt around the SOYO as it was running Prime95 and felt no hot spots as I did on the ASUS A7V (IMHO – one of the hottest running boards around).

How does this stack up to, let’s say, the ASUS A7V running the same components and speed? My ASUS A7V yielded these results:

Very close on SiSandra, about 2-4% lower on the video benchmarks. I think the word is “competitive” but not “outstanding”.

I varied FSBs to see how high the SOYO could go, and was not able to get any higher than 105 MHz. My ASUS A7V and ABIT KT7 can run 110 MHz stable and post higher. This particular board did not have much headroom on FSBs – whether all will exhibit the same pattern is unknown.

Not a standout performer but not a slacker either. The inclusion of an ISA slot is an interesting choice and a handy one for those with 56K ISA modems. This strikes me as a competent board aimed at the upgrade market; the exclusion of the AMR slot would seem to point in that direction. The clear real estate around the socket is a plus for cooling.

Not the most feature rich board nor the handiest (small dipswitch), but a competitive entry from SOYO. At the right price, not a bad buy. If a future BIOS bypasses the dipswitch, even better.