SUMMARY: The new Delta 60x10mm fans can enable using the PEP66 the “right” way on Socket A motherboards.

Alpha’s PEP66 is one of the premier heatsinks around. Its design is one that allows fans to “breath” – the airfoil shaped fins offer less air flow resistance than other designs, allowing higher air flow through it, adding to its performance. It is large, very effective and a solid addition to any Socket A system – if it fits on your board. 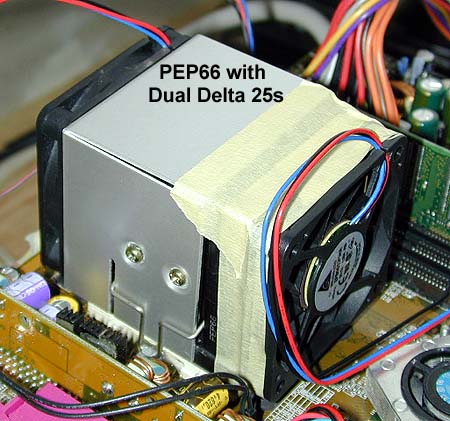 Tony at PHAM COMPUTER came across Delta’s 60x10mm fan; it looks like it moves something like 25 cfm through it. What’s great about this fan is that it allows you to use the PEP66 per spec in tight fit situations due to its slim profile. As you can see from the pic above, I took two Delta 25s, taping one to the exit side of the PEP66, to see how they would do.

When you have two fans, the total air flow is not additive – two 25 cfm fans do not yield 50 cfm. Typically a two fan setup will increase air flow by something like 20-50% (depends on the resistance to air flow, the fan’s pressure curve, etc). Based on the results below, I would estimate the dual Delta 25s are equivalent to the ADDA 27 cfm.

Compared to rotating the shroud, running the PEP66 as it was designed is more efficient. Depending on the heat load, I think you will get something like 2-5 C better cooling with the shroud fitted per spec. Go HERE for results with the Pep66’s shroud rotated using the same fans.

The PEP66 was mounted on an ASUS A7V running a T-Bird 750 @ 1050 MHz, 1.95 volts (as reported by Motherboard Monitor). Running at this speed and voltage results in a 69.2 watt heat load from the CPU. I ran Prime 95 for about an hour for each test and recorded CPU temp and ambient temps using the Omega HH23 Digital Thermometer. CPU temps were recorded by a thermocouple drilled into the heatsink exiting at the CPU’s core top.

This looks like a “more pain, more gain” scenario, pain being the amount of noise you are willing to tolerate. The efficiency of the PEP66 shines through the test, showing very respectable cooling even with a single Delta 25. I could not fit two 60 x 25 mm fans on the PEP66 – the ASUS’s Northbridge chip interfered with the second fan.

Note also that the incremental performance of the Delta 38 compared to the Papst 33 is nil – could be that increasing air flow much beyond 30 cfm just does not gain much of anything – diminishing returns sets in. This suggest that any combination of around 30-35 cfm is about as high as you would want to go.

In sum, dual Delta 25s can be an effective substitute, in a space constrained environment, for an ADDA 27 cfm. Certainly from a noise standpoint, it’s an effective solution.

Thanks again to Tony at PHAM COMPUTER.

SUMMARY: The stretched-out ORB doesn’t deliver stretched-out cooling. Andy Lemont at Millenium lent me his Super ORB to test out. In some of the heatsink testing we did, the Super ORB failed to cool my Duron 800 @ 1000 MHz,