“I just read your update to the Tidal Pool water block article and all I can say is – DUH!

I think there’s a WHOLE lot of people out there who don’t remember the difference between conduction and radiation.

I saw an all-copper fan-sink article recently that illustrates it perfectly. They said, “If copper conducts heat better, let’s make the whole damn thing out of it….”. Then, they stick a 38CFM 60mm fan on it and say, “See? It’s 1 degree better than an Alpha” (Never mind that the Alpha still had it’s 26CFM fan on it).

Well, I put a 38CFM fan on an Alpha and it was 2 degrees cooler than with the 26CFM one. Makes that all-copper one look merely average. That difference between conduction and radiation is why.

Alpha’s engineers aren’t stupid. Neither are all the high performance auto racing radiator designers out there. There’s a reason why the REALLY good small radiators have copper tubes and aluminum fins. You gotta use the right material for the right job.

You use copper to put the heat WHERE you want it, and you use aluminum to DUMP that heat to another medium.

The extremely small core size of the new chips exaggerate this point to a critical nature. Aluminum can’t move the heat across the whole surface fast enough to avoid it building up.

Think of CONDUCTING as spreading heat from point-to-point within the same medium, and RADIATING as moving heat out of one medium and into another.

BTW, I replicated one of those ‘Beehive’ water blocks. I always used a copper base plate, but experimented with different pins and caps. I tried copper and aluminum pins, and I tried copper and PVC caps. The best performance came from the aluminum pins. Cap material mattered nada. The PVC cap did just as well as the copper one.

Granted, we’re not talking HUGE gaps, but by the time they get to the ‘nuclear furnace on the head of a pin’ core sizes, it’ll matter greatly.”

The lesson is clear – look for copper bases in aluminum bodies for the most efficient cooling.

UPDATE 8/29/00: Aluminum heatsinks are not efficient cooling solutions for AMD Socket A CPUs.

It took a burnt finger, but I now understand why cooling AMD’s Socket A CPUs is so problematical – ALUMINUM!

You see a lot of heatsinks made of aluminum for two reasons:

We all know that copper is a much more efficient heat transfer material than aluminum, but it cost more and is much more difficult to work – I can use woodworking tools on aluminum but definitely not copper. Aluminum, given the heat transfer needs of CPUs, was an acceptable material – until AMD came on the scene with blisteringly hot CPUs.

Ryan Andres wrote to me and asked me to test out the Tidal Pool waterblock on an AMD Socket A CPU. OK, a good idea, so I mounted the Tidal Pool on my Duron 650 @ 935 and cranked it up.

Much to my surprise, it ran hotter than I expected:

At first I thought the Tidal Pool was mis-aligned, so I remounted it – same results. What’s going on here??

I proceeded with my changing things around and had removed the heatsink. Without looking, I turned on the power and realized after a couple of seconds there was no heatsink on the CPU! DUMB! I quickly shut down and reflexively touched the bare CPU: Result – a blistered finger. The ASUS was set at 1.85 volts, so the CPU was radiating about 50 watts of heat into a very small area, as I painfully found out.

However, what now struck me, while I was applying ice to my finger, is that while dissipating this amount of energy with a finger was not recommended, it is also not recommended for aluminum. When heat is concentrated in a small area, the heatsink has to remove the heat quickly and efficiently to cool it down. The essential problem heatsink designers must now contend with is aluminum’s “spreading resistance”.

If you heat the center of a 4″ square piece of aluminum with a heat source about 1/4″ square in the center, the temperature in the center will be the hottest with decreasing temps at the sides. Do the same with copper and you see the same pattern except the temp at the sides will be higher compared to aluminum. Copper has less “spreading resistance” than aluminum – it’s more efficient.

To prove to myself that this was what was happening here, I mounted a small square of copper between the Duron and the aluminum Tidal Pool water block with the following results:

Much better, but not as good as a copper waterblock. However, the point is now (at least to me) obvious:

Aluminum heatsinks are OK up to a point, but the point is crossed with AMD CPUs – only copper based heatsinks will cut it.

Intel’s power-sipping Coppermines can be effectively cooled by aluminum heatsinks, but not the power-gulping AMDs – it’s really that simple. The lesson here is very clear – if you are going air-cooled for socket A Durons or T-Birds, the best possible solution will utilize copper in one form or another. Same for water.

An air-cooled heatsink that comes to mind is the Alpha PAL6035 – I’ll get one to test out and see how it does.

Ed Lawrence is making some really fine water blocks. His design is different from the others as I outlined in an earlier review (HERE) and continues to perform like copper but cost like aluminum. Ed sent me the latest version of his socket cooler which features 90 degree nylon elbows – necessary for many motherboards to clear capacitors and the like, as the pic below shows. 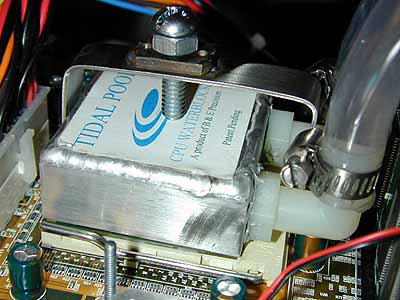 Tidal Pool on the Iwill Pro VD133. I have found the clip to be one of the best – easy to mount and dismount and very secure.
THE TEST

I decided to do a motherboard test for this one, using an Iwill Pro VD133, PIII500 @ 750 at 1.65 volts, using a Senfu radiator modified to accept 3/8″ tubing and a Danner 1.5 submersible pump. I tested the Tidal Pool against a copper BE Cooling block with the following results:

Most aluminum blocks will show a temp difference of anywhere from 4-6 C compared to copper, so the Tidal Pool is clearly performing at a higher level. If you are considering water cooling, I don’t think you can go wrong with a Tidal Pool water block.

One that comes to mind right away is the Alpha PAL6035 – I’ll get one to test out and report on it.

Go to page 2 for design templates. The resevoir would’ve taken too long to unbolt for the picture session; I had the camera for only 15 minutes. The interior has staggered cooling fins similar to the interior of the Danger