The Inquirer reported that an “industry friend” told them that they were able to get an Abit IT7 MAX2 V2.0 up to 220MHz.

The Inquirer is being a bit coy, since “industry friend” in this case turns out to be Abit PR, as Sudhian Media reports.

We’ll talk a little bit about the PR claims later, but Abit included a screenshot, which is unintentionally rather interesting.

Per the screenshot distributed by Abit PR and reprinted in the Inquirer article, the Abit engineers, with all their technical resources (including their pick of motherboards), managed to do this:

“ABIT Engineers have been feverishly testing the IT7 MAX2 against all the competition. The result? Only ABIT can overclock over 200. The reason? Only ABIT uses a 4-phase power solution, while others make do with 2-phase power. For future generations of CPUs, 4-phase power is needed. If your board doesn’t offer 4-phase power, don’t expect to upgrade your PC to the next generation of CPUs.”

“The King of Intel Overclocking generally has been hitting an FSB of 180+ for most end-users, depending on system specs. In recent testing, with standard cooling, the IT7 MAX2 v 2.0 hit a mammoth 220 FSB!”

Unfortunately for Abit’s claims, almost a month ago, our Brett Wasserman, whom I think has a couple less technical resources than Abit, bought an Albatron PX845PE Pro II motherboard off the shelf and tested it twelve hours at the following FSB: 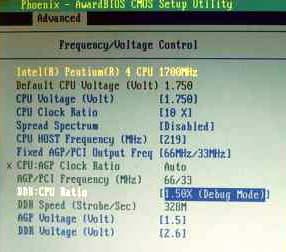 The difference between Goliath and David? 1 MHz.

So much for Abit’s claims of a 40MHz advantage.

The Secret To The Trick

These results put neither Abit engineering nor even Brett in Overclockers Valhalla.

Mere mortals can’t reach over 200MHz simply because no current standard Intel CPU (outside of a few supercooled ones) can run at over 200MHz with the locked multipliers they come with. Getting any current Intel chip with a locked multiplier to run at 220MHz means a minimum CPU speed around 4GHz (and for a locked 3.06, a CPU speed of about 5GHz).

So far, per VR-Zone’s Northwood database (the entry is near the bottom of page 1) only one person has managed that with a locked chip, and that person required liquid nitrogen for both the CPU AND the (RDRAM) memory.

So how did Brett and Abit manage the feat:

In Brett’s case, it was simple and no secret. He just used an unlocked engineering sample CPU and set the multiplier to 10X.

What did Abit do? The CPU it ran shows a multiplier of 13X.

Let’s blow it up even more and look at the stepping of the chip:

Problem is, there is no “9” stepping current Northwoods. There’s only “4” and “7” steppings (which are respectively B0 and C1 stepping CPUs.

Some might think that “9” could be just a blurred “7.” Fair enough, let’s see what a “7” from the same screen shot looks like:

Looks rather different, doesn’t it? Let’s look at another “9” from the screenshot

Let’s now consider what Intel has planned. The next change to Northwoods will be multiple VID CPUs. The CPUID won’t change for them; the stepping will remain “7.” So this is not one of them.

What is Intel’s next step after that, scheduled for the end of February? 200MHz FSB CPUs.

Could this be a future 200MHz CPU?

If you look at the name string for the Abit processor closely, it’s unclear exactly what it says. You could read it as “2.53,” but you could also read it as “2.60.”

I admit, though, that the pictures are fuzzy enough not to be able to draw a definite conclusion that this is in fact a 200MHz processor. It may be an unlocked 2.53 instead.

What we can say is that Abit may have taken a 200MHz FSB processor and overclocked it to 220MHz, but definitely used a future Intel processor to do so.

All this means is the number of chips meant to handle power. Does the number really mean anything? No.

Basically, a mobo maker can use fewer, beefier chips to handle power, or use more, less beefy chips to spread the load out more. Those boards with fewer chips have to take into account the increased wattage (and heat) from those beefier chips, but there’s no inherent stability or power advantage from using more rather than less. It’s the quality of those chips that matter, not the number.

We can conclude that reaching 220MHz with an 845PE chipset is not quite the stunning feat Abit said it was. This is not to say the IT7 is a bad board, just that Abit used a little trick to try to make you think it’s a whole lot better than its competition, and it isn’t.

We can also say that Abit used a future Intel processor (which may have helped matters a bit), and may have used a 200MHz FSB processor (which probably didn’t matter much since our man used an old Willamette to get to 219).

Buy the best board, not the best marketing tricks.

Intel had a fall analyst meeting on December 7 (access the webcast from this webpage). They talked about a lot of things, but the one item most likely to impact those reading this is Intel’s plans for x86-64 on the

UPDATE 4/5/00: The hack is easy – getting it work in some situations is more difficult; two experiences: My experience using the Promise FastTrak66 RAID controller with Windows 2000. By Charles Waters I’m sure you’ve seen all the reviews of