The man in question….

“Mr B” was born Brian Berryman, on September 30th, 1968, and grew up in Abington, Massachusetts. He is a 1986 graduate of Abington High School.
Brian dabbled a bit with computers back then (TRaSh 80’s and his brother’s Apple IIe), but never really got into it much.
A while after graduating in ’86, he picked up a Commodore 64, which he used for a good number of years, mostly as a game system.

Perhaps I’m dating myself…does anyone else remember being bored, and typing stuff like this at the ol’ blinking cursor?

From there, I got involved in myriad projects and endeavors, including following the Grateful Dead around for a few years, doing a “roadie/guitar tech” gig for a while with a local cover band and wondering why all the kids I grew up with were off getting married,
buying houses, and having children while I wasn’t… (Here’s a hint B….put the bottle down…)

When I finally did decide to say goodbye to “John Barleycorn” in late ’95, I was still playing with that silly old Commodore 64 while everyone with sense was oohing and ahhhing over the new Intel Pentiums. I split the difference and got a Sega Genesis and a 1979 Firebird.
The New Millennium would be almost dawning before Mr B finally got himself a “real” PC.

One Firebird, two Camaros and a subscription to Super Chevy Magazine later… I got my first “PC”. A Dell Netplex 433/P. A relative gave me this computer,
(I still have it, BTW), and it came loaded with Windows 3.1, which I fairly promptly killed somehow by editing or deleting a system file accidentally. Oops!

Shortly thereafter, I got a used Dell Dimension P75 machine (I still have this one too..LOL). I did some reading trying to find ways to make this system go faster, and one day
I got a copy of Peter Norton’s Guide To Upgrading And Repairing PCs (circa 1995). I wound up buying a Pentium 233 MMX chip, installing it in the Dell, and wound up with my first “overclock”,
which was in reality, an underclock. The motherboard didn’t support MMX technology, so the fastest it would run was 175 MHz. But the “bug” had “bit”… 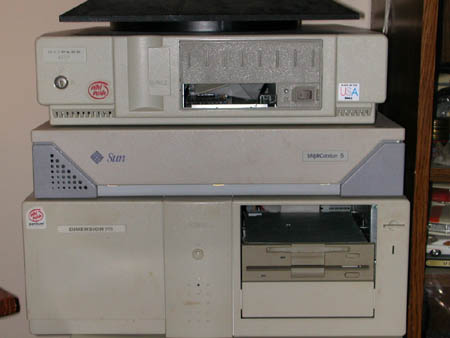 In the process of researching the Dell, I found that there’s a bulletin board on Dell’s website, and started asking questions. They seemed a bit out of place amid all the questions about the
new intel Coppermine chips, but a couple guys took the time to answer them. I’ll probably never find out who he is, but I owe a huge debt of gratitude to one of them, who suggested I go and check
out this website called www.Overclockers.com. The rest, as they say, is history… =)

Well, after finding Overclockers.com and the Forums here, moving my way up from a “n00bie” asking about Celeron 300A’s and 600 FC-PGA’s, the “powers that be” bestowed upon me Senior Membership in the Forums. Not too long after that, I was asked to oversee the Classified Ads here, a position I still have today. That led to a Moderatorship in the Forums as well. By and large, I can say the majority of what I know about computers, I learned right here at this website.

I recently started back to school, taking classes at Clark University. I’m currently taking the A+/PC Tech classes, and will go on from there to the NET+, LINUX+, MSCA, and MCSE courses. If you live in the Boston, Massachusetts area, and are interested in taking PC related classes,
they’ve got a lot to offer, and foster a great environment in which to learn. Tell them “Mr B” sent ya… 😉

On occasion, I have been asked to, or have submitted articles to the Front Page here, and recently was asked by Joe Citarella if I’d be interested in writing articles here on a more frequent basis. After all I’ve gotten from this site and the Forums, how could I say no? So, you’ll be seeing my prose here at Overclockers.com much more frequently in the future.

I’ve already got a few “irons in the fire”, and more planned for the near future. I hope that you all enjoy reading about these different products and modding ideas that I will be writing about as I do writing them.

Brian Berryman, aka “Mr B”

Oh, BTW…Just because I have those old Dells, doesn’t mean I run ’em…here’s my computer these days. 😉

The Springdale boards are officially released today. They look like fine boards which are suitable for many moderate purposes. However, in the long run, we think that hardcore overclockers would be better off with Canterwoods, for the following reasons: The

OOPS! Good Thing I Had a UPS!

Within a few weeks, we’ll see the next generation of video cards coming out. For the first time in quite a while, though, a wise video purchasing decision will be dependent on what you do with the rest of your