SUMMARY: Can be run whisper quiet with decent cooling, or merely quiet with very good performance. 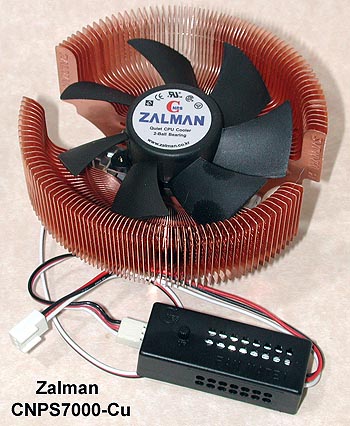 The good guys at The Heatsink Factory were nice enough to send a sample of Zalman’s CNPS7000-Cu. This is one of the more interesting and very nice looking P4 heatsinks I’ve seen. Designs which feature “enclosed” fans tend to be very efficient and less noisy.

The fan used is 92mm, which gives some idea of its size – it measures 109mm diameter x 62mm high and weighs 773 grams. Check Zalman’s site for motherboard compatibility and a well done video demonstrating installation. 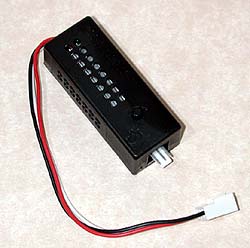 with this unit which allows users to dial in fan speeds. The problem I see with it is that it’s not designed to mount in a readily accessible location – unless you intend to run your case without a side panel, adjusting fan speeds will require removal of the case’s side panel. This is fine if you intend to “set it and forget it”, but for continually tuning fan rpms, it’s not too handy.

At its lowest and highest setting, I could not measure fan noise with a Radio Shack sound meter¹ 8″ from the fan; at its lowest, it’s virtually silent.

The base is formed by compressing the fins with two bolts: 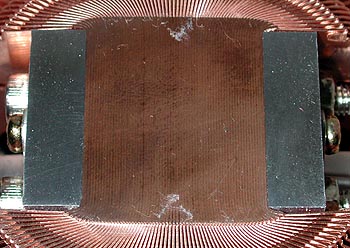 The base is then polished to a flat finish – I found it to be very well finished and doubt that hand lapping will improve it.

The mounting mechanism is a good one: 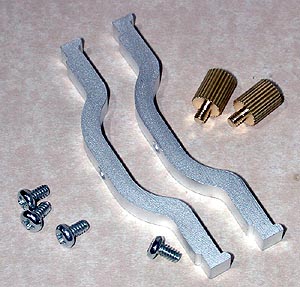 The long brackets slip into the P4 retention bracket and, using two screws, the heatsink bolts into the brackets. I found it fairly easy to mount, as long as your handy with a magnetic screwdriver. In additon, there are two “nipples” for AMD Athlon 64 CPUs.

Motherboard results place the Zalman CNPS7000-Cu, at its quietest setting, in the mid rank of P4 heatsinks (Heatsink Ranking) tested to date. At its highest setting, it ranked near the top.

SUMMARY: Could be adapted for very good Socket A cooling.

The good guys at The Heatsink Factory were nice enough to send a sample of Zalman’s CNPS7000-Cu.

It seems that a number of folks have adapted this heatsink for Socket A use – the “Dark Stalker” sent me this link to an article (in Danish – thanks Axle!) which shows how it’s done. In addition to building mounting brackets, the base may need modification to seat properly on the CPU.

Being of curious mind, I decided to see how the Zalman CNPS7000-Cu might fare as a Socket A heatsink.

The Zalman CNPS7000-Cu was tested on the Socket A CPU Die Simulator which gives results that are unaffected by motherboard influences. I also tested it without the fan controller – it increased fan speed by about 200 rpm.

Die Simulator results place the Zalman CNPS7000-Cu, at its highest fan speed, in the upper rank of Socket A heatsinks tested to date (Heatsink Ranking).

All things considered, the Zalman CNPS7000-Cu is shaping up to be a fine choice for very good cooling at reasonable noise levels. Reducing fan rpms can reduce noise to a whisper, but cooling performance will suffer. With an easily accessible variable controller (eg a rheobus), this is a heatsink that won’t keep you up at night.