SUMMARY: After trying a number of different methods, looks like the tried-and-true AMD/Intel method coupled with back of the CPU readings gives the best picture.

I’ve spent the last two weeks immersing myself in heatsink testing methods. Andy Lemont at Millenium has been instrumental in this effort, along with John Carcich, Jim Fager, Stephen Hoar and Tillman Steinbrecher*. As a group of interested hardware testers, efforts are continuing at developing standardized testing methods so that you, the buyer, will have the best, objective testing to aid in purchasing decisions. We’ll report on progress periodically. 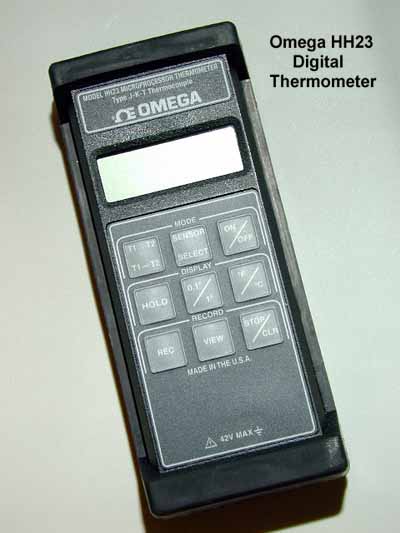 The methodology I am using employs the following equipment: 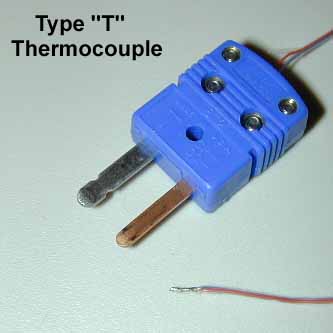 Heatsinks are fitted with a thermocouple as follows: 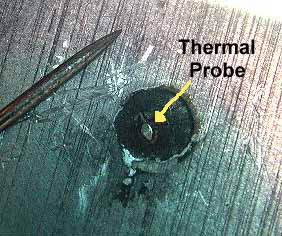 Common pin shown on the left.

There are two approaches one can take:

I have adopted the second approach as I believe a motherboard test is closer to what users will experience when they install heatsinks. The CPU simulator also gives valuable information and results from such a test should be used in conjunction with “live” testing. I have found, for example, that back CPU temps can vary a great deal between two heatsinks even though they show similar CPU case temps.

As we test heatsinks, I will report the following:

Back of CPU Temps are measured by a thermocouple epoxied on the back of the CPU used in the test. Motherboard Temps are those read out from the motherboard’s CPU thermistor, usually found in the CPU socket.

Heatsink C/W is measured by the following formula:

This measure gives the user an objective means to compare heatsinks against each other.

Once you know a heatsink’s C/W, you can then estimate the CPU’s temp rise under various loads; if you know watts and ambient temp (here temp at the fan intake), you plug them into the formula and it tells you how well this particular heatsink should cool the CPU. Simple.

The lower the C/W, the better the heatsink disposes of CPU heat. However, note that C/W will change if, for example, a higher cfm fan is used. Also note that at some point, any heatsink can become “saturated” with heat such that it will “hit the wall”. Heatsinks can only get rid of so much heat, and if you exceed its limits, it will get very hot – as will the CPU.

Therefor, as you review these test results, bear in mind that loading any heatsink above the tested range may yield very different results.

*Many, many, thanks to Andy Lemont at Millenium, Stephen Hoar at Burning Issues, Jim at Benchtest.com, Tillman Steinbrecher at Heatsink Guide and John Carcich for unstinting efforts and time on this issue. 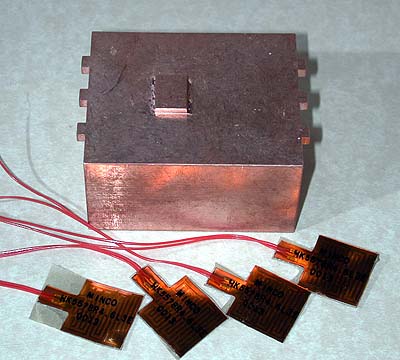 I continually look to improve the heatsink testing we do. As another test, you will see results using a simulated CPU die (T-Bird size), pictured above.

The simulated die is made of copper and was made by a machine shop to simulate mounting a heatsink on a socket. The three tabs on each side correspond to the location of a socket’s lugs – this allows the same amount of pressure as when mounted on a motherboard.

In front of the block are the heaters used to simulate CPU temps. These are Minco #HK5578. I used four of these to better spread the load to the block. Arctic Silver epoxy was used to glue the heaters to the block’s base. 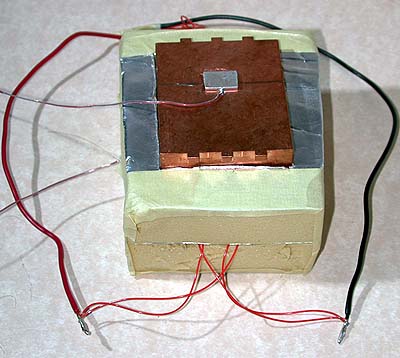 The block weighs about 1200 grams/2 ¼ pounds; there are thermocouples in the simulated die and base to check temps.

The heaters are powered by a Laboratory Power Supply capable of producing up to 180 watts – more than enough to stress a heatsink. In preliminary testing, I ran heatsinks up to about 130 watts.

In running this tester, all four heaters are wired together so that they are powered equally through the power supply. The block is encased in foam insulation to mitigate heat loss to the air.

Testing reveals that heatsinks will show higher C/Ws than those found using actual CPUs and motherboards. This is due to two factors:

The table below compares the two approaches:

Simulated die testing is clearly higher. The variation in results between the two (the Ratio in the chart) is due to the factors mentioned above plus the interactions between the heatsink and motherboard, which vary from each heatsink. The relative rankings are similar, however.

Readers can use the simulated die results as the “worst case” performance for any heatsink; the real world tests are indicative of results users may expect under similar circumstances in “real world” use. 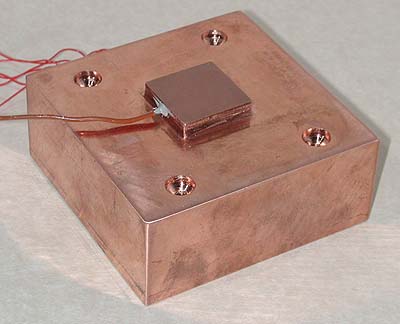 I continually look to improve the heatsink testing we do. As another test, you will see results using a simulated P4 CPU die, pictured above. The simulated die is copper and was made by Andy Lemont over at Millennium Thermal to simulate a P4 CPU. 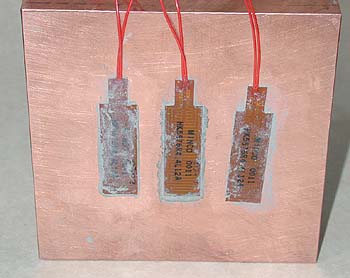 Epoxied to the base of the block are the heaters used to simulate CPU temps, Minco #HK5576. I used three of these to better spread the load on the heaters. I made thermal epoxy by mixing Cooling Flow thermal grease with five minute epoxy to glue the heaters to the block’s base.

The heaters are powered by a Laboratory Power Supply capable of producing up to 180 watts – more than enough to stress a heatsink. All three heaters are wired together so that they are powered equally through the power supply. The block is encased in foam insulation to mitigate heat loss to the air. 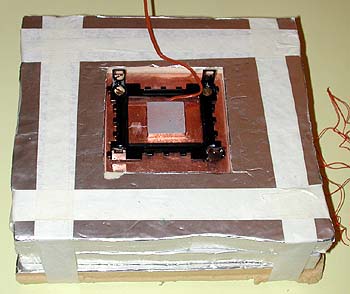 Encased in foam – more insulation to be added on top.

Temps are measured using an Omega Digital Thermometer with factory made thermocouples, one embedded in the die and one to measure air temps. It takes about an hour for the Die to reach stability, and then testing proceeds.

I’m testing the Die Simulator, but so far no surprises. It is “easier” to cool a larger die than the smaller one – no surprise, as the large die spreads heat over a much larger area compared to the fingernail size PIII and AMD CPUs.

Many thanks to Andy Lemont for milling this for me; I also was fortunate to have the Die’s top polished to a flat finish by KAF industries located in Stamford, CT. Fred Hartlett was nice enough to show me around while polishing the Die flat. If you have the chance to see a top-rate machine shop that does optically flat polishing, jump at it.

I saw a polishing machine that is air cushioned – the work is so precise that it must be damped from long wave vibrations (something like 4 cycles/sec) that can come from sources as much as five miles away.