Yesterday, 3DMark released Wild Life Extreme. A cross-platform benchmark geared for mobile devices. Users can compare results from devices such as Windows Notebooks, Apple Macs with the M1 processor, even cellular phones on iOS and Android. This is an improved version of the original Wild Life benchmark that was released last year.

Wild Life Extreme utilizes the Vulkan API on Android and Windows devices, Metal on iOS and Mac, and DirectX12 on Windows 10 on Arm. The benchmark uses a 3840 × 2160 (4K UHD) rendering resolution before scaling the content to fit the device’s display. The new benchmark is packaged inside 3DMark Advanced Edition which is available on Steam or at the UL Benchmark website. Here is the official press release from 3DMark.

3DMark Wild Life Extreme is a new cross-platform benchmark for Apple, Android and Windows devices. Run Wild Life Extreme to test and compare the graphics performance of the latest Windows notebooks, Always Connected PCs powered by Windows 10 on Arm, Apple Mac computers powered by the M1 chip, and the next generation of smartphones and tablets. 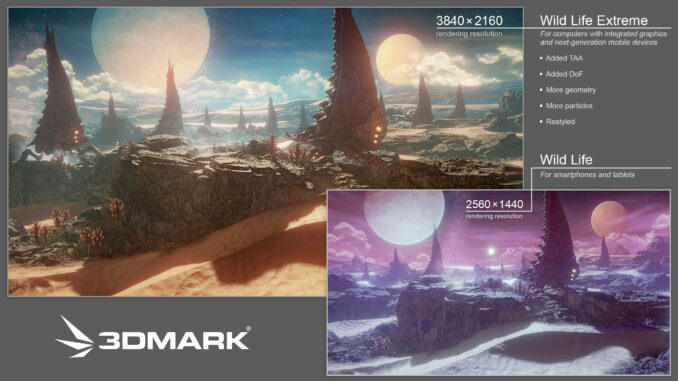 Wild Life Extreme uses the Vulkan API on Android and Windows. On iOS and Mac, it uses Metal. On Windows 10 on Arm, it uses DirectX 12. You can compare scores across platforms and across APIs.

Run 3DMark Wild Life Extreme to test and compare the GPU performance of the latest Windows notebooks, Always Connected PCs powered by Windows 10 on Arm, and Apple Mac computers powered by the M1 chip. The faster the benchmark runs, the higher the score and the better the performance.

Setting the bar for the next generation of mobile devices

3DMark Wild Life Extreme sets a high bar for the next generation of Android and iOS devices. Don’t be surprised if the frame rate is low as the test is too heavy for many current phones and tablets.

Run the 3DMark Wild Life Extreme benchmark to measure a device’s ability to provide high performance for short periods. Use the score to compare GPU performance across platforms.

The 3DMark Wild Life Extreme Stress Test is a longer test that shows how a device performs under longer periods of heavy load. Instead of producing a single score, the main result from the stress test is a chart showing how your device manages performance and heat during heavy use. 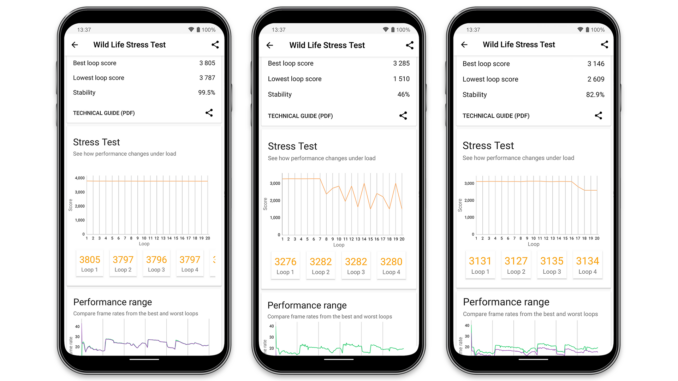 More than a score

3DMark is a benchmarking app that gives you more than a score. With its detailed charts, lists and rankings, 3DMark gives you deep insights into the performance of Android and iOS devices.

On Windows, 3DMark makes it easy to compare your benchmark score with results from other systems with the same components. 3DMark also helps you relate your 3DMark score to real-world game performance by estimating the frame rate you can expect in a selection of popular games.

Wild Life Extreme is available now available as a free update for 3DMark Advanced Edition. From now until May 10, 3DMark is 85% off, only $4.49 (USD), when you buy it from Steam and the UL Benchmarks website. 3DMark is now available from the Nuuvem store in South America too.

Wild Life Extreme is available as a free update for 3DMark Professional Edition customers with a valid annual license.

Wild Life Extreme is available now as a free update for the 3DMark Android benchmark app. Get it now from Google Play or download the APK. Your device must have Android 10 or later and Vulkan Anisotropy feature support (level 16 and above) to run the Wild Life Extreme benchmark.

Wild Life Extreme is available from the Apple App Store in our free 3DMark Wild Life iOS benchmark app. On iOS, compatibility starts with iPhone 7 Plus and runs to the latest models. On macOS, the benchmark is compatible with Mac computers powered by the M1 chip. You need iOS 13 or later or macOS Big Sur 11 to run the benchmark.

Sleeping Dogs is a game that almost did not come to fruition. Fortunately Square Enix picked up the game and with the help of developer United Front Games, re-tooled it to try to reach the high standards set by GTA4. In this review I will discuss the story, gameplay, graphics, and display some performance numbers with my AMD HD7970.

There’s a new challenger in the world of 3D benchmarking! It’s from a little (un?) known company called Allbenchmark. As the name suggests, it involves a cat. A rather large cat, at that. Want to know more? Keep reading!

3DMark has upgraded its benchmarking software to include a DirectX Raytracing feature test. With the upcoming November 18th launch of AMD’s RX 6000 Series GPU’s, ray tracing will no longer be an Nvidia only feature. This latest benchmark will measure and compare the performance of dedicated ray-tracing hardware giving 3DMark the ability to compare these features on the latest graphics cards. Here is the press release from 3DMark.

Yesterday, 3DMark released Wild Life Extreme. A cross-platform benchmark geared for mobile devices. Users can compare results from devices such as Windows Notebooks, Apple Macs with the M1 processor, even cellular phones on iOS and Android. This is an improved version of the original Wild Life benchmark that was released last year.