Stot shows how to improve 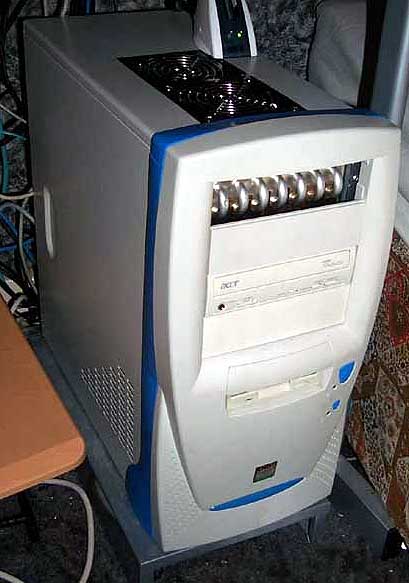 Whole system enclosed in the mid sized case; Radiator end the only real give away that something is different.

One of the parts I wanted to experiment with in my water cooling was the radiator, so my first choice was a motorcycle radiator – specifically, one from a trail bike, as these are usually tall and thin.

It looks like it should be a good heat remover if you add a couple of fans on it, but thinking more about how this type of radiator works, I decided it really wasn’t all that efficient. This design involves pumping the hot water in thru a 1/2″ pipe; water pressure forces the water to go thru all the radiator pipes.

Individual looped pipes at the end of the original heater core.

Now, if you were to take a surface area of all of the openings of the little pipes inside the radiator and combine them, they would probably add up to the same surface area of a 1/2″ pipe. This means that at the pressure the motorcycle uses, the water will travel up ALL the fins.

In our computers using the popular Eheim 1046, as I am, and using 3/8″ pipe, the water pressure is never going to be high enough to force any water up ALL the fins. In fact, I’d be surprised if more than 4 of them are being used at any time and it will always be the same 4, as the water is going to take the easiest route to the exit. That’s a lot of wasted heat removal.

So I took another read thru Overclockers.com and took note of a few writers using heater cores/matrixes. Problem with these is they work pretty much the same as above and rely on pressure to use the whole matrix. The water is going to travel along the fins closest the inlet and out the fins closest the outlet with our pumps.

What I needed was a radiator that forced the water round the whole radiator and past ALL the cooling fins! This is called a Water Coil; they are commonly used in industrial machinery that needs cooling and also in Air Conditioning units as condensers, removing heat from the evaporated coolant and turning it back to liquid. They are however, generally too large to fit in a PC case.

There are commercial units along these lines available from Senfu, for example, but I wanted to experiment and recalled the heater core article by Nick Easton. He used the core from a MKIV Ford Escort (UK); this had round tube construction and has a hell of a lot of fins for heat transfer! Each pipe looped individually back up to the shared outlet chamber.

Making of The Matrix

Off to the scrap yard. 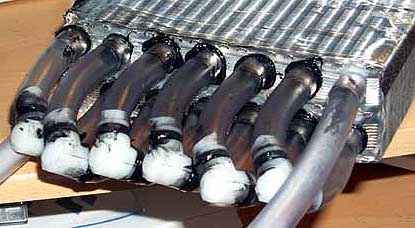 I pulled a core from a Ford Fiesta and found it to be exactly the same design, about 6″ x 12″, so I brought it home and grabbed the hacksaw. I was mounting the rad above my CD drives, so it had to fit in the width of the drive bay. I have a mid size case so it couldn’t be full length because of the PSU.

I cut 2″ off of the inlet/outlet side of the core and, with some pliers, I removed the cooling fins one at a time until I had about ½” of round pipes sticking out of the top of the fins. I cut off one row of pipes and smeared silicone along the cut edge to tidy it up a bit and stop any metal shards flaking off into the computer. 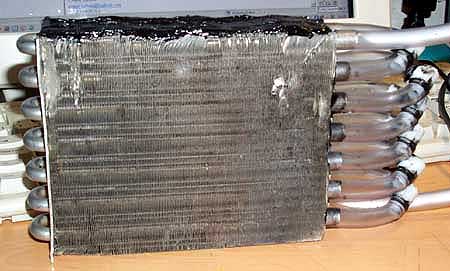 The modified core ready to fit.

Next I had to create a circuit around the matrix using tubing. I used 90 degree pipe connectors, cutting them down a little so they would fit better. I then ran short pieces of pipe from one core pipe to the diagonally opposite core pipe in the next row, using silicone on all the joints to help fix the pipe and to prevent leaks.

Mounted onto the top blowholes above the CD drive.

I was quite happy with the result and I think this design now has huge cooling potential.

To test it, I had a thermal probe touching the metal on the inlet pipe and one on the outlet pipe. I ran SiSandra for an hour to increase temps, then stopped and let the temperature settle for a couple of hours while I did some browsing and the like.

This modified matrix and full water system is now enclosed in the mid sized case. The internal case temp at the time of testing was 32.5 C. With a single 92mm fan running at 12v, the radiator temperature, measured at the coolest coils in my drive bay, is 32.0 degrees C.

I did the same test running the 92mm fan at 7v. This added 2 degrees C to the CPU temp and took the radiator temp to 34.1 degrees C. The case temp remained 32.5 degrees.

Adding 2 huge fans at both sides of this should wield some great cooling! I want something quiet though, so maybe a 7v mod on both sides. Also, using the whole 6″ x 12″ matrix will add a lot more cooling area, so if you have a full tower to fit, it should work great.

So now my whole system sits comfortably inside a mid sized case, it is quiet and keeps my CPU and GeForce Pro cool and cranked up.

SUMMARY: A very neat way to house a submersible water pump for CPU cooling – totally secure, cheap and easy to mount inside a case. I saw this container at UnaClocker and it also is at Benchtest.com. I have had