I had to, wanted to, needed to buy a new computer because I had just picked
up a copy of DooM III and my old computer could not cut the mustard, cheese, whatever.
So I decided that if I was going to get a new computer I would try to buy one that was quieter
than my old system. Here is what I got: 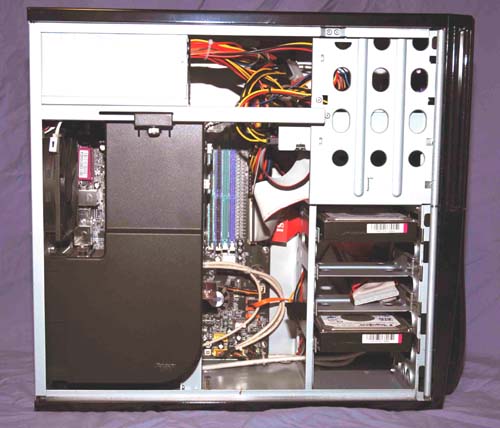 The case was supposed to be quiet, the graphics card had a large copper heat sink/fan which reviewers said made less noise than the other cards and the AMD CPU had Cool and Quiet, which was said to work well, right – so that should work well??!!….

I got my new system home, connected all the cables and turned it on with great anticipation.
Holy crap! What a racket it made! It was louder than my old machine!
So I opened up the case to see what was making all the noise.

First I noticed that the new PSU in the Sonata II had two 80 mm fans instead of one 120 mm fan (Sonata I) and the PSU had a wire going to a fan power connector on the motherboard. The wire was only a two wire connection, not a three wire, so there was no speed control and this made the PSU fan run at full speed. Right – well let’s yank that off the board.

OK, so now the PSU is a bit quieter but the system is still quite noisy – more investigation is required.

So here is what I did.

I bought a Zalman ZM-NB47J heatsink

To replace the Northbridge heatsink and fan, I was going to have to take the entire computer apart (which I just paid $50.00 to have someone put together) because you have to get at the back of the motherboard to release the spring loaded retention devices used to hold the cooler in place. The heatsink and fan
came off with a little twist, but if it was on there solid, I have read that if you use a hair dryer to heat it up it will come off easily.

Once I had the old cooler removed,

it had a rubber gasket on the back of it. This came off easy with a knife and would be needed later when I replaced it with the new Zalman heatsink.

The Zalman heatsink was going to be a tight fit because of some of the capacitors on the graphics card,

so I had to snip off the top of four of the fins to get it into place:

A pair of pliers worked well for this.
{mospagebreak}

I assembled the screws and arms on the heatsink, applied the thermal paste that came with it, put the rubber gasket onto the Northbridge chip and popped the heatsink into place. Well that was easy!

So now onto the graphics card:

The graphics card’s heatsink and fan

came off easily – it had two spring loaded retention push pins just like the ones on the Northbridge. I cleaned off the old thermal paste with some alcohol,

put on the memory heatsinks,

and then followed the instructions (well, I looked at the pictures) that came with the Zalman VGA cooler for the rest of the parts. It went together quite easily but would it fit next to the Northbridge heatsink:

I put all the parts back into my case and now my only question was would the new Zalman VGA cooler get in the way of the chassis air duct that came with the new
Antec Sonata II case? It fit fine with room to spare.

I turned the system on. There was no smoke or sparks. It booted up into Windows XP and, for the first time, run quieter than my old system.

So now all I need is a PSU that is quiet (it would be nice to hear the old PSU that was in the Sonata I case) and a quiet 92 mm fan for the chassis air duct and I
will finally be able to play Doom III in peace and quiet.