Today we get an opportunity to look at another M.2 NVMe based SSD in the ADATA Gammix S11. The Gammix series of products are typically part of a higher performance line and the Gammix S11 drive is no different. The modules are able to reach speeds up to 3200MB/s sequential reads and 1700 MB/s on writes which, on paper, places it up there with other enthusiast level drives.

The Gammix S11 shares the same internals and specifications with the SX8200 but differ on a price level with the S11 costing a bit more. The main difference between the two are the included heat spreader on the S11 and branding, but under the hood contain the same bits including the Silicon Motion SM2262 controller and Micron 2nd generation 3D TLC NAND. The S11 should run a bit cooler with the heatsink and performance should be in the same ballpark. We were able to put the drive through our testing suite and see if the paper specs match up with actual results. Read on to see how the Gammix S11 fared in our testing.

Generationally, the S11 differs from the S10 in both the controller used as well as the NAND. The XPG Gammix S11 uses the latest Silicon Motion SM2262 controller and pairs it with 2nd generation 64-layer Micron 3D TLC NAND. This combination of controller and NAND improves performance significantly over the outgoing SM2260 based models (Gammix S10, XPG SX7000/8000). Also updated is the NVMe protocol moving from 1.2 to 1.3.

Unlike our previous review on the Toshiba OCZ RC100, the ADATA Gammix drives all come in a 2280 size and use both sides of the PCB. On one side are the storage modules, a NANYA DRAM module (512MB total through 2x 2Gb ICs), and the controller, while the other side has another DRAM module and storage modules.

In addition to the new internals, the drive includes an already attached heatsink which isn’t just there for aesthetics. The new heatsink is said to drop temperatures by about 10°C compared to M.2 SSDs without a heatsink. If that isn’t good enough, ADATA also offers (separately) the XPG Storm heatsink which they say is the first M.2 2280 SSD add-on heatsink on the market. It is made of aluminum with a plastic shroud and incorporates a tiny fan for active cooling. The device also includes three RGB LEDs under the shroud and is compatible with RGB lighting control apps from the major motherboard manufacturers.

On the software side of things, the Gammix S11 supports Low-Density Parity Check (LDPC) error correcting technology ADATA says can detect and fix a wider range of data errors for more accurate data transfers and a longer SSD lifespan. In addition, the drive supports RAID Engine and Data Shaping they say ensures data integrity and delivers an extended SSD lifespan for longer-lasting stability. 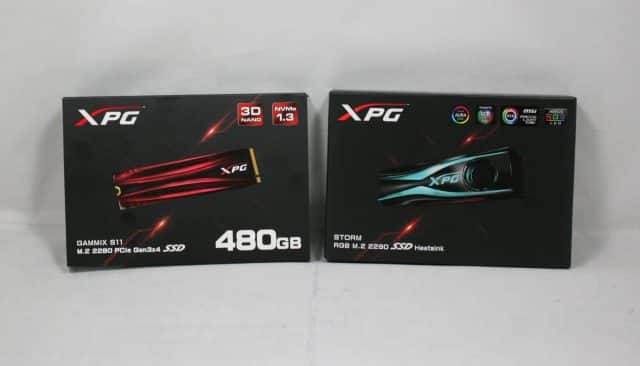 Our first glimpse of the retail packaging for both the M.2 PCIe SSD and the Storm heatsink show they follow the XPG theme with black packaging along with a picture of the product in the middle. Adorned around the edges are mentions of capacities and features while on the Storm box its RGB lighting compatibility is listed.

From the slideshow above, users are able to see the packaging for the S11 has a flip top lid exposing the drive as well as listing features on the flap. The 2280 size drive fits snug in form fitting foam inside the packaging to prevent shipping damage. The Storm is packed similarly sitting securely in cardboard with the included accessories (power leads, screw, RGB control wire). 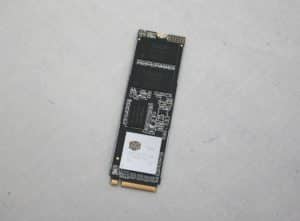 Our first look at the drive shows its heat spreader attached and looking good hiding the ICs while flipping it over, exposes a DRAM cache chip and hidden under the label, more ADATA storage modules. After taking the heatsink off (attached with a thermal pad only) we are able to see the controller, DRAM cache, and NAND. 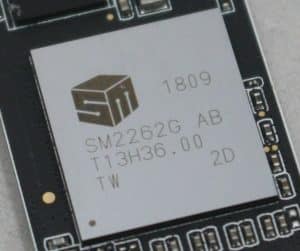 The pictures above are close-ups of the Silicon Motion 2262 controller, ADATA labeled 2nd Generation 64-layer 3d TLC NAND, as well as the NANYA DRAM Cache IC which weighs in at 2Gb each for a total of 512MB of DRAM cache capabilities.

The slideshow above shows pictures of the Storm heatsink base showing the thermal pad as well as the device’s RGB LEDs in action.

ADATA, like other SSD manufacturers, also include access to free software to get the status of the drive in the system. ADATA’s is called SSD ToolBox.

The SSD Toolbox is a complete utility used to monitor as well as optimize the drive. The colorful software is able to run diagnostics (both a quick and ‘full’ diagnostic), set temperature and capacity alerts, Secure Erase capabilities, as well as system optimizations which include adjusting settings for Superfetch, Prefetch, and automatic defragmentation abilities. Overall it keeps an eye on the drive and will help set up your operating system for peak performance with the drive. In my limited use with the software, it worked as described.

In our first test, Crystal Disk Mark (CDM) Reads, the S11 performed well in the high queue depth reads marking the fastest drive we have tested so far at 3179 MB/s but comes back down to the middle of the pack results with lower queue depths. 4K reads lead the pack by a fair margin here and show middling performance on writes with a larger queue depth.

In AS SSD, the S11 really shined here beating out the competition across the board in reads and writes no matter the queue depth. This is the first drive we have tested which broke the 50 MB/s mark with a 63 MB/s reads in 4K file sizes. While sequential throughput is important, the vast majority of files are much smaller so 4K performance is an important metric on how well the drives perform on a daily basis. Outside of the 4K results, one will notice the similar performance here between the SX8200 and S11.

Access times in AS SSD were also the fastest we tested which leads to the overall score. The ADATA S Gammix S11 managed to score higher than all drives we have tested here with a score of 3846, barely beating out its SX8200 twin.

In ATTO, the Gammix S11 performs quite admirably, leading the SX8200 and the Patriot Hellfire by a small margin in reads. Writes, on the other hand, go to the Hellfire, with the S11 and SX8200 performing essentially the same. Nothing out of the ordinary in ATTO testing.

In our Anvil Storage Utility results, the S11 scored 13,279 which is the fastest result we have seen so far.

The ADATA Gammix S11 performed well during our testing trading blows with its less expensive twin the SX8200 ($140 @ Newegg) and the Patriot Hellfire, both of which we reviewed (SX8200 and Patriot Hellfire) here at Overclockers.com. The S11 proved itself to have enthusiast level performance (but not the best), while not asking for a premium compared to other drives in the market (Samsung 970 Pro for $198. Though when looking at the Samsung 970 Evo for $155, it is currently priced a bit less and, on paper, outperforms it. It does not come with a passive heatsink, however. To that end, there is a lot of competition in the market for this size and speed M.2 NVMe drive.

Along those lines, ADATA offers the Storm active heatsink which will fit on any drives. For an additional $28 on Amazon, users are able to add a heatsink that will keep the M.2 drive underneath cool and help prevent any throttling due to thermal conditions. The Storm heatsink at full tilt was audible over the video card and system fans but a simple adjustment and that noise of the tiny fan was mixed in with other ambient system noises. A potential drawback on using this item is that it will not fit under a video card as it sits about 1/2″ above the PCIe slots. That out of the way, the Storm kept temperatures around 9°C cooler with the fan on low than with the heatsink alone keeping it well under the throttling point. If the plan is to use the drive heavily, this can be a good add-on to prevent potential throttling.

The ADATA Gammix S11 brought to the table its second generation 64-layer 3D TLC NAND along with the new Silicon Motion SM2262 controller which brought performance up significantly from the previous generation Gammix S10 SSD. These features along with the RAID Engine and Data Shaping help the drive’s integrity and endurance with the S11 480 GB sporting a 320 TBW and 5-year warranty to back it up. At this price point, there are multiple options which will do the job for the enthusiast, so be sure to look at reviews and the data as that is about the only way users can see a difference in such fast drives. Pricing is fair among its competition and performance is good for the price so the Gammix S11 receives an “Approved” award.

ADATA is a well-known name in the computer hardware industry for their memory and storage solutions. They founded Xtreme Performance Gear (XPG) to provide high-performance products to gamers and tech enthusiasts. If you have used any of ADATA’s high end products over the past several years, then I’m sure the XPG branding is nothing new to you. Today, we have ADATA and XPG’s entry into the mechanical keyboard market with the INFAREX K20, a full-size keyboard with Kailh blue switches and backlighting. Read More

NVMe based M.2 drives have been in the consumer landscape for a couple of years now. Typically these blazing fast mass storage devices come with a much higher price per gigabyte than its 2.5″/7mm SATA based cousins. As time has gone on, more players entered the market and budget oriented NVMe M.2 drives started to appear lowering the price per gigabyte while still being faster than SATA based drives. In this case, Toshiba OCZ has sent us the RC100 480GB M.2 NVMe SSD to review. Read More

The ADATA SE800 is an updated version of its portable line and the first to use Innogrit’s Shata controller technology. By using the most up-to-date advances in USB to PCIe protocols, ADATA has produced a portable SSD that’s very compact, versatile, and blazing fast. Read More