Bill Adams’ testing with conclusions for all radiators. 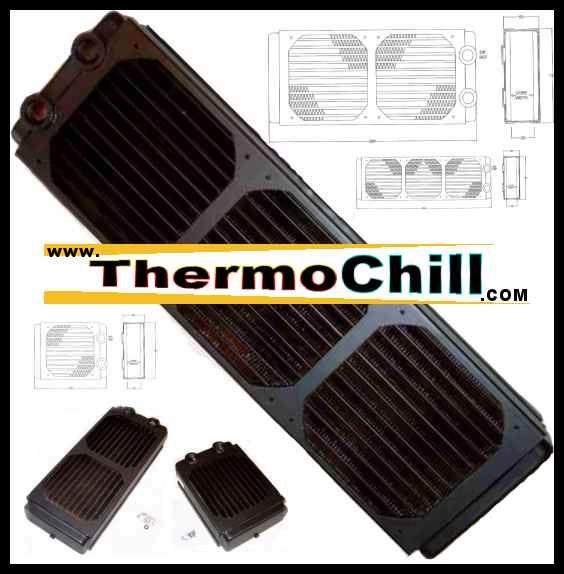 Five ThermoChill radiators were tested to ascertain their air and liquid side flow resistances, and to determine their heat dissipation characteristics. Additional data was also developed to describe the effect on flow resistance of different connecting fittings and to illustrate the effect of different coolant to air temperature differentials. A variety of fans were tested to enable users to obtain an insight as to their expected performance and to quantify the benefit of using two fans in a push-pull arrangement.

Radiators Tested and an Outline of the Test Conditions and Methods

The connections are female 3/8” BSP, which has a 1 thread per inch difference as compared to NPT. BSP barbed fittings are available in the US, though not common, but both metal and plastic NPT sealed without difficulty. Worth noting is that the connectors are machined from brass and quite stout.

Three radiators were tested comprehensively: The HE 80.1, the HE 92.1, and the HE 120.2; while all were tested for liquid side flow resistance and dissipation with selected fans of the low, medium, and high flow types.

Coolant flow rates were measured with a Danfoss MAG 5000 flow meter with the MAG 1100 ¼ in. magnetic flow tube, differential pressures with a Foxboro 823DP differential pressure transmitter and Digitek digital gauge, temperatures with a Fluke 2180A Digital RTD Thermometer with multipoint RTD selector, and the coolant temperature maintained with a Haake A82 Recirculating Chiller.

The following equations were used to calculate the radiators’ performance from the collected data:

For thermal resistance, or C/W (having the units °C/W):

Before reviewing the individual radiator results the effect of the air to coolant temperature differential must be well understood.

From the above graph it is clear that as the air to coolant temperature difference is increased, likewise is the dissipation. The comparison being based on (Tfluid – Tair) = C versus W, where Tfluid = (Tout + Tin) ÷ 2. The calculated C/W was 0.015 for each of these three tests. (This is a seriously large radiator.)

Any description of radiator capacity MUST define the coolant to air temperature difference for that ‘rating’.

The performance of the three radiators tested comprehensively is shown below.

And to repeat, while the heat dissipation values may seem small, note that the temperature differential is small as well.

The four curves each show the radiator’s heat dissipation at a specific backpressure, which is also a specific air flow rate for that individual radiator. Of note is the changing relationship between the liquid and air sides; at low to moderate air flow rates the dissipation increases only slightly with the flow rate, while at a high air flow rate there is also a marked increase in cooling capability.

For the HE 80.1 the fan tests were done only at 3.8 lpm (1.0 gpm) and it can be seen that all ‘normal’ air flow rates can be achieved by means of fan selection. From an application perspective it can be understood that using this small a radiator will result in somewhat higher coolant temperatures (to increase the air/coolant differential) and that a higher air flow rate will be needed.

Several fans were tested at 12 and 7V, both singly and in a push-pull configuration. Running the single Delta FFB0812EHE at 7V instead of 12V reduced the radiator capacity by 18%. Running two Panaflo FBA08A12 fans at 12V instead of one increased the heat dissipation by 17%, while running the two Panaflo fans at 7V produced no gain at all compared to the single fan at the same voltage.

It can also be seen that the highest backpressure / air flow rate cannot be attained with any ‘normal’ fan – or reasonable noise level. This is true for all the radiators tested, and may be considered a characteristic of this type of radiator core construction. Likewise, the lowest backpressure air flow rate yielded very poor performance. Fan selection should be based on achieving an air flow rate between the two middle curves, at the upper (37.4 Pa) for maximum performance and towards the lower (12.5 Pa) for low noise.

This is the same data as in Graph 3, but plotted differently to emphasize the effect of increased air flow. The significant increase in heat dissipation at very high air flow rates illustrates that the benefit of very high coolant flow rates can only be had at correspondingly ‘high’ air flow rates – for this radiator. It is suspected that the flow regime may also be in transition within the tubes. Unfortunately, these flow rates are impractical in desktop computer watercooling systems due to pump and fan noise limitations.

From the above graph it is evident that a radiator’s thermal resistance, or C/W, is not a single or constant value; rather it depends on both the liquid and air side flow rates.

Any description of radiator capacity MUST define the air and liquid side flow rates upon which the ‘rating’ is based.

One can also conclude that the very silent Papst 8412NGL fan is not suitable for this application.

This graph is again a re-plotting of the data used in Graph 4, and reinforces the recommendation previously made to select fans to achieve an air flow rate between the two middle measurement points (between 0.28 m³/min and o.75 m³/min airflow for this radiator). The ‘knee’ in the curve is suggestive of a transition in the air side convection rate. But understanding what a fan’s actual output is when matched to a specific radiator is impossible for an end user. (This statement is based on extensive comparative testing of fans and seeing different results with fans having similar specifications.)

For the test of the HE 92.1, a single Nidec D09T-12PG fan was also tested over the full range of flow rates. It can be concluded from the resultant curve that a fan’s capability at a single coolant flow rate will match the dissipation curve based on the fan’s backpressure capability.

The HE 120.1 was tested with fans only, in various combinations. Interestingly, two Delta 1212VHE fans at 7V were quite similar in performance to one Delta at 12V, yet the noise was substantially less. These fans might be a ‘solution’ for users interested in a dual performance mode. Again, the Papst low noise fans were not good performers.

Again it can be seen that the radiator benefits little from the 11.4 lpm flow rate.

Due to their identical construction, other than their length, the dissipation capability of the HE 120 series can be extrapolated as shown in this graph.

The ThermoChill radiators’ flow resistance at different flow rates can be compared in this graph:

As expected, the HE 80 has the highest flow resistance followed by the HE 92.1. Due to the additional number of tubes in parallel, the HE 120.1 has the lowest resistance with higher resistances from the HE 120.2 and HE 120.3 due to their increased length.

The ThermoChill radiators are extremely well built, compact and convenient to use due to the built-in shroud, threaded connections and bleed screw. The combination of these features is unique and affords the watercooling enthusiast a range of solutions to fit any cooling need.

No single ‘value’ is proposed as a rating as there is no even nominal consensus within the watercooling community (I hesitate to say ‘Industry’) as to the characterization of testing and rating conditions. My considered opinion would be to use 3.8 lpm (1.0 gpm) as the coolant flow rate and 10°C as the air to coolant temperature differential. (Note that this conflicts with the testing done for this report. Converting to a 10°C basis would double the dissipation values shown in the graphs; the C/Ws are the same.)

Unfortunately this does not in any way resolve the issue: What is to be the air flow for the ‘rating’ conditions?

Despite my reluctance, and conservatism, the radiators ‘need’ a rating. I would suggest the following:

The defined rating conditions are:

Under such conditions the radiators would have the following ratings:

Note that the radiators are capable of dissipating more heat than indicated above – the coolant temperature will simply rise until equilibrium is achieved.

A particular difficulty in optimizing radiator performance lies in the area of fan selection. This difficulty is compounded when fan noise is a primary, or significant, concern. Despite the universal existence of fan data sheets, replete with P-Q curves, it is often the case that a specific fan will deliver appreciably better performance than others having similar specs.

The reason for this is not understood by this investigator, but one conclusion is clear: For low noise applications the fan – radiator combination must be tested to assure adequate performance. And if such testing has been done, end users for whom low noise is a primary concern certainly should utilize the specific fan recommended.

Worth remembering: “It is all about air flow, i.e. getting the heat out of the rad. You want to reach the knee of the C/W curve.” **

Many thanks to Karl Smith and more information on the radiators can be found at the ThermoChill website.

The evolution of a water cooling system. — Jeff Armstrong.