SUMMARY: A very interesting design, but performance lags well behind the current crop of high performance Socket A heatsinks. 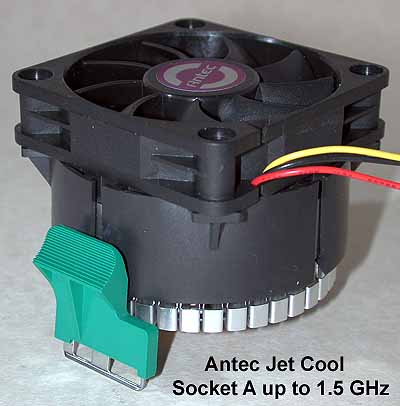 The good folks at ANTEC sent us some heatsinks and a very nice case (review in the works) to test out. Antec has designed a series of heatsinks with the “Jet Cool” label. These feature aluminum fins surrounding a copper core (29 mm diameter by 34mm high). This is not a Delta 38 screamer – the fan is rated at 24 cfm and 35 dBA.

I tested the Jet Cool rated up to 1.5 GHz for Socket A CPUs. Antec indicates a C/W of 0.53 on their literature, definitely on the high side of 0.30 C/W (our recommended minimum for Socket A CPUs). This means that a 70 watt CPU will rise about 37C over ambient.

The copper base came with a thermal pad; I removed it with some difficulty – this was the most onerous pad to remove I have seen to date. I used a razor blade and then cleaning fluid to get all traces off the copper base. 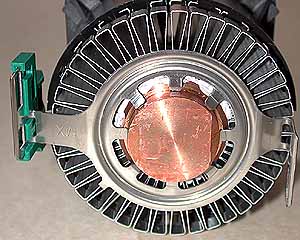 The aluminum fins are not bonded to the copper core; in fact, they can be rotated around the core by hand. Note that air flow is through the fins to the CPU carrier. Heat transfer from the core to the fins is aided by using thermal grease between the base of the aluminum fins and the core, as shown in this closeup: 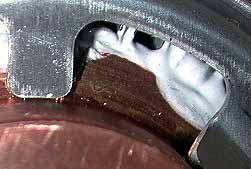 With airflow directed at the CPU’s carrier, you might expect to see some “interesting” temps from the in-socket thermistor. The Antec did not disappoint – as you read through the performance tests, you will see a marked difference between temps at the CPU/back and the MBM readings. If you were to calculate C/Ws from the MBM temps with the Iwill KK266+, you get 0.22 – quite a contrast to Antec’s stated C/W of 0.53. 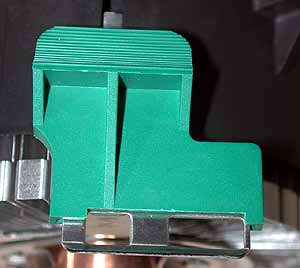 The clip is a good one – plenty of space to get your fingers on it and fairly easy to mount and dismount. The trick here is to rotate the heatsink to its final position and then push down on the clip to engage the socket’s lugs.

I prepared the Antec Jet Cool by boring a hole through the base sideways and then through the top of the base to the side hole, so I could epoxy a thermocouple above the CPU; removing the fan is difficult, so I chose this method instead.

The thermocouple is attached to an Omega HH23 Digital Thermometer. Ambient temps were measured with a thermocouple placed about 1 inch from the fan’s intake. I used Prime 95 to stress the CPU on an Iwill KK266, BD133 (MBM temps are on-die) and Abit KT7. Arctic Silver grease was used in all tests. CPU Case Temp is the temp at that point where the CPU contacts the heatsink, CPU Back Temps are measured by a thermocouple on the center back of the CPU.

Compared to Antec’s stated 0.53 C/W, this test series showed better performance with the T-Bird, although the smaller die Duron and PIII resulted in C/Ws closer to Antec’s.

While a very interesting design, I think the bond between the aluminum fins and the copper core contributed to its less than stellar performance, compared to other high performance heatsinks. No doubt a Delta 38 would make a difference, but I don’t think the combination would be as attractive as some other options.

The Antec performed pretty much in line with what Antec indicated. This is not an overclocker’s heatsink and falls short of what I would recommend for aggressive Socket A cooling.

Thanks again to ANTEC for sending this our way.

Negative airflow can greatly increase the efficiency of ducts.

I have known Tom for about a year and he is an avid overclocker and developer of peltier cooling solutions. He has spent a lot of time getting his peltier heatsink just right and sent me one to review. As

An excellent, top performing heatsink for Socket A/370 cooling. — Joe