“Just thought I would write to you and relay my experience with the ASUS ME-99 motherboard. I actually bought mine in the ME-99B flavor; baby AT form. I had my old 486 laying around taking up space and realized it has a 250W power supply. So, I researched Abit and ASUS boards, my top two choices, and landed with the ME-99B after reading the manual that you can download from the internet.

Your article is dead on from this users standpoint. It is a great little MB and while the graphics are not nVIDIA or 3Dfx, I could install them. I bought a 366 MHz Celeron for this board with the express purpose of overclocking. After installing my Alpha PAL6035 (3DfxCool) two days ago, I instantly turned the FSB up to 100 MHz and the system is rock stable so far.

SUMMARY: This is a nice board if you’re looking for a Celeron “All-in-One” solution. The optional on-board video and audio are not “bleeding edge” nor high-performance compared to what’s available, but certainly adequate. I would recommend this board to anyone looking to build an inexpensive Celeron “back-up” system, an office computer or one for Mom to write letters.

I noticed this board at a computer show and was struck by 1, the location of the power connector (top of board) and 2, the size of the capacitors near the socket. I hate power connectors that get in the way, and this one is great – does not interfere with anything and easy to get to. The capacitors (see pic below) are huge – these coke-can sized caps say a lot about the stability designed into this board. 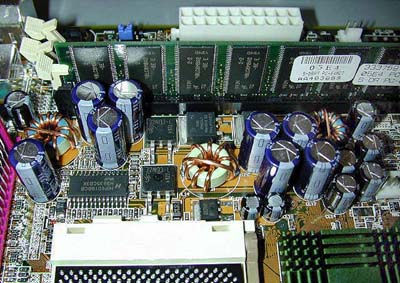 As I stood there reading the excellent manual (very detailed and comprehensive), I grew more interested in trying it out – I saw it as a way to build an inexpensive system that could be upgraded over the next 3 years, if needed. The ASUS ME99 has a number of features that make it a cut above the usual cheapo boards you might see in an office computer.

Normally I don’t rhapsodize about features, but I can’t help but marvel at the robust feature set the ME99 has, most notably:

These are in addition to the usual stuff – for a detailed list, go HERE. The on-board video is not puny by any means – this is a full featured video complete with many video settings. The board has optional slots for up to 8MB of dedicated video ram – otherwise the ME99 can use up to 8 MHz of SDRAM (user sets in BIOS). However, there is no AGP port, so if you elect to disable the video at some point, you are limited to PCI video cards. It ships with 5 PCI and 2 ISA slots.

What I find particularly interesting is the ability to set CPU and RAM speeds Synchronously and Asynchronously. This allows you to use, for example, PC 66 RAM with 100 MHz CPUs, PC100 RAM with 66 MHz CPUs or run the CPU at 133 MHz while running the RAM at 89 MHz. If you multiply any FSB by 0.667, you get the Asynchronous RAM speed (except for 66 and 75 MHz – these run at RAM speeds of 100 MHz at the Asynchronous setting). If you have a bunch of odd parts, you can effectively use them with this board – usually the case in small office situations.

I set up the ME99 using W98 SE with the SIS Video and Busmaster Drivers – these installed easily and were trouble free. I then tested the ME99 with two Celerons – the C366 and C433. The C433 is an OEM part and I was able to run it at 75 MHz (488) but no higher. Strangely, I could run it with the CPU and RAM set to 75 MHz, but not with the CPU at 75 MHz and the RAM at 100 MHz. I thought it might have been the RAM and tried it with Samsung G8 but with the same result.

I then tested it with the C366; this CPU can do 110 FSB but no higher with air cooling (Alpha). This too could not run with the CPU at 75 MHz and the RAM at 100 MHz, so I think there is some basic incompatibility here. However, I was able to run all combinations up to 105 MHz (578) stable; it would not post at 112 MHz, but no surprise to me. The following table lists some SiSandra 99 Benchmarks at various combinations:

In addition to the features listed above, the ME99 CD comes with ASUS PC Probe, a system monitoring package covering CPU temp, fan speeds and board voltages. This is a nice package with graphics capabilities and a “History” setting for saving results – a nice touch. If anything goes out of spec (set by user) an alarm pops up. It also ships with PC Cillin 98 anti-virus (I use Norton). There is also a fully featured Audio suite for the optional on-board audio.

I like this board a lot for what it is – a solid “All-in-One” package with lots of flexibility, stability and the quality you expect from ASUS. I would not hesitate to use this for an office computer due to its upgrade potential; I also would use it to build a solid, inexpensive computer for a friend or family member looking for a basic internet/word-processing machine. With a street price of around $80, you can build a very nice system with 64 MB and a 56K modem for about $475.

Speculation: If someone develops a Socket 370 adapter allowing Coppermines to mount on Celeron sockets, this could be even more interesting. Don’t you think it odd to see these many bus speeds for Celeron parts?

Shuttle AK31V20: What The Reviews Don’t Tell You

UPDATE 8/15/01: AK31V20 What The Reviewers Don’t Tell You: Update Thanks to a very astute reader (icherub) you can find the S907 BIOS here. It’s only on Shuttle’s ftp site. It also appears I upset at least one reviewer –