EVGA has released two motherboards in preparation for Intel’s upcoming 11th Gen Core processors. The EVGA Z590 Dark is a flagship E-ATX motherboard with 22 VRM phases and has been designed with massive overclocking potential and maximum performance. The EVGA Z590 FTW WIFI features 17 VRM phases and is geared for top enthusiast-level performance. As with all Z590 chipset motherboards, support for PCIe Gen4 graphics cards and NVMe SSDs is right at your fingertips.

Below is EVGA’s press release:

Introducing the EVGA Z590 Motherboards – A New Generation of Excellence

EVGA Z590 motherboards paired with 11th Gen Intel® Core™ processors bring unprecedented speed and bandwidth to the latest graphics cards and M.2 NVMe SSDs, along with improved performance across the board. Built with the Intel® Z590 Chipset, these motherboards are PCIe Gen4 ready with a data transfer rate up to 16 GT/s, doubling the previous generation. As befitting this milestone, EVGA designed and engineered these new motherboards from scratch, resulting in a pair of sleek-looking motherboards jam-packed with the latest features. Introducing the EVGA Z590 DARK and Z590 FTW WIFI motherboards – the first of a new generation of EVGA motherboard excellence.

The EVGA Z590 DARK once again strikes fear into the hearts of other Z590 motherboards by combining every ounce of power available to the Intel® Z590 chipset and fine-tuning it to perfection. This armed and fully-operational motherboard is born from a 10-layer PCB and powered by a 22-Phase VRM. With support for PCIe Gen4 graphics cards and M.2 NVMe SSDs, overclockers have nothing to fear when shooting for the highest scores in any benchmark. For everyone else demanding the ultimate in performance, the Z590 DARK is loaded with over a dozen USB options, eight SATA ports, two 2.5Gbps NICs + WiFi 6/BT 5.1, 7.1 Channel HD Audio, three M.2 Key-M slots, and two fan headers dedicated to AIO CPU Coolers. We’ve even included a nightlight with the DARK’s first-ever ARGB cover for those times when you might need to see what you’re doing. As a wise overclocker once said, “Once you start down the DARK path, forever will it dominate your destiny.” and with the EVGA Z590 DARK, that destiny is sure to be filled with shattered records and countless victories on the battlefield. 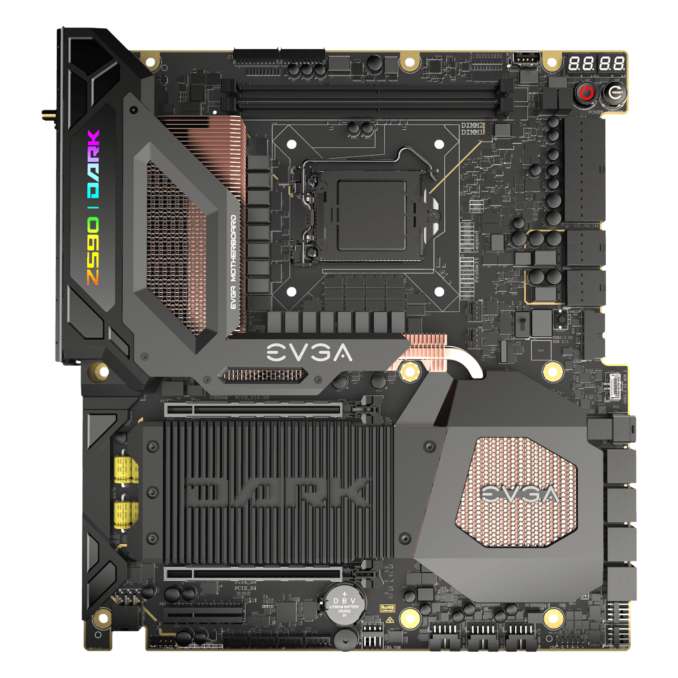 The EVGA Z590 FTW WIFI is what you’ve been waiting for to bring out the best of the 11th Gen Intel® Core™ i9 processors, which now feature support for PCIe Gen4 graphics cards and NVMe SSDs. This motherboard redefines what it means to be For The Win with a completely updated aesthetic, a rededication to maximizing the features on an ATX form factor, and an unrelenting desire to give enthusiasts all the power, performance, and stability they can handle with a 17-Phase VRM and 8-layer PCB. In addition to blazing-fast 4800MHz+ memory support, WiFi 6/BT 5.1, DisplayPort 1.4 and HDMI 2.0, and an excessive number of USB options, the EVGA Z590 WIFI also features multiple ARGB headers to customize your system lighting, a gigabit NIC, and 7.1 Channel HD Audio. The EVGA Z590 FTW WIFI is truly the next generation of FTW motherboards. 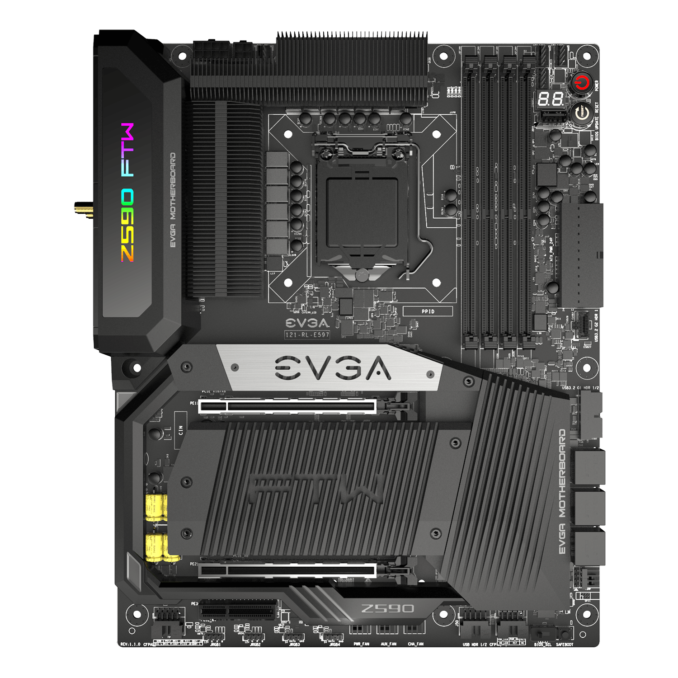 About EVGA
EVGA is the #1 NVIDIA authorized partner in channel sales throughout North America. Based on the philosophy of intelligent innovation, market knowledge, and the real time operation, EVGA continues to identify the need in the market place and providing the solution to that need. By offering product differentiation, a 90 day Step-Up program, and other customer focused programs, EVGA is a clear leader in all categories: etail, retail, distribution, and system builders. With headquarters in Brea, CA, EVGA’s global coverage includes EVGA GmbH in Munich, EVGA LATAM in Miami, and EVGA Hong Kong. For further information online about EVGA, visit https://www.evga.com.

These days, who doesn’t like water cooled computer parts? It’s a good thing too, EVGA’s latest version of the flagship NVIDIA GTX 1080 has a built-in AIO cooler. Coming in with a hefty overclock and the FTW PCB, this should be a real contender on the performance side as well. What do you say we strap it to the bench and put the EVGA GTX 1080 FTW HYBRID GAMING through the paces?

By now, most are used to seeing that the new motherboards with the top chipset cost a lot, but it’s not a rule. Gigabyte prepared some of their new motherboard series for AMD and Intel processors to deliver premium features and be more affordable at the same time. One of those motherboards is reviewed today, the Gigabyte Z790 AORUS Elite AX.

A few forum members are reporting they received fake processors from Newegg.

I wish they made AMD boards as well. Always liked the look of EVGA mobos

I remember going to CES the year Vega was coming out... There were (terrible) rumors that it was named such in part because EVGA was going to then support AMD graphics. :rofl:

Jacob and our OCF team got a kick out of that one!

Those almost look good enough for me to go from my ASUS. Really like the copper look of the Dark.

Interesting move for the ram slots on it though. Wonder how that will play with the large air coolers that have their fins cut for the standard spot.

You're right. But the Dark isn't meant for air... like a Ferrari isn't meant to be driven only in a school zone. :p

If someome insists on buying a $500 extreme overclockimg mobo and running an air cooler, you'll have to be aware of the clearance (Clarence - atra boy of someone knows where that came from, lol).