CoolerMaster has announced a new chassis in the MasterCase lineup named SL600M. The SL600M is the first in the SL series of cases CM says is designed to “blur the lines between work and play”. The exterior is made out of anodized aluminum and forgoes any RGB features which help the case to have a more appropriate appearance in a home office or workplace. Inside, they say ‘demanded an alternative perspective on system layouts and cooling’ and has multiple options for internal layouts adding flexibility for the internal setup. 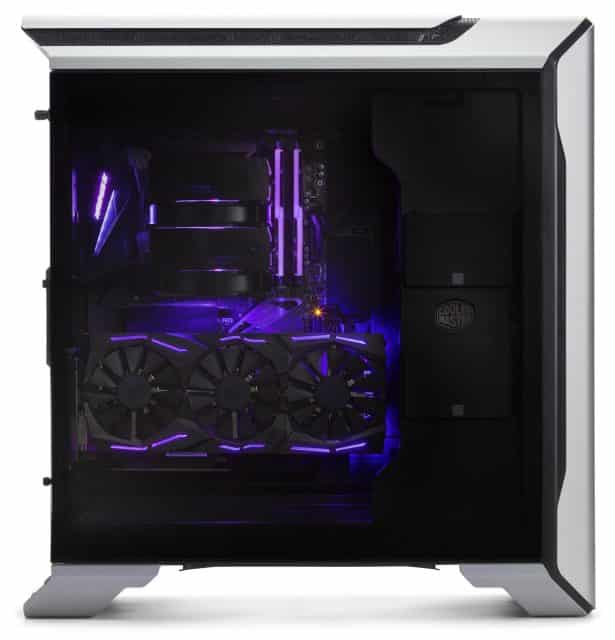 The mid-tower chassis comes in silver and black with the body made of steel (along with the right side panel), the front and top panels of aluminum and the left side panel made from tempered glass allowing owners to show off the build inside. The case supports Micro-ITX, Mini-ATX, ATX, and E-ATX boards (up to 12″ x 10.7″) and has a total of seven + two expansion slots supporting vertical graphics card installations. Storage wise the SL600M is able to support four 2.5″/3.5″ drives which should be enough for most users, especially in this day and age of M.2 based storage modules.

The I/O Panel consists of several USB ports including a USB 3.1 (10 Gbps) Type-C port, two USB 3.0 Type-A ports, and two USB 2.0 ports. The audio ports used here are two 3.5mm jacks, one for audio+mic, and the other a dedicated microphone jack. The power button and HDD LEDs are white – the only form of LED one will find on the case! In order to control the fans, there is a slider which is able to speed up or slow down the attached fans via PWM control.

CoolerMaster goes on to say the internal layout is changed as well with a vertical orientation along with two 200mm intake fans at the base are said to take advantage of the natural convection of heat with a more direct airflow path to the internal components funneling more air through the top mesh of the case. There are dust filters on the bottom intake locations. Additionally, the top panel is also able to be raised in order to help with increased airflow. Graphics cards are also mounted vertically with the PCI mounting windows able to be rotated 90 degrees allowing for two graphics cards to be mounted vertically together and allows for direct airflow to the GPU(s).

As far as support goes, the SL600M is able to support a CPU cooler up to 191mm tall, a 200mm power supply, and up to a 318mm (12.5″) graphics card. The radiator support is plentiful with room up top for up to a 3x120mm or 2x140mm radiator (with a maximum thickness clearance of 43mm). The bottom will support the same sizes with an increased maximum thickness of 72mm with the graphics card installed vertically.

There wasn’t a mention of a specific date for availability in the PR, but it is up for presale on Newegg.com for $199.99 and should be available soon!

Small form factor (SSF) builds have been quite popular over the last few years, and Fractal Design has a new case for those in the SFF market. Fractal Design announced the Define Nano S back in January, and we finally got our hands on one to showcase to you all today. Enjoy! Read More

A revisit to the CM690 II Advanced with some modifications and water cooling. Read More

There’s more Mini-ITX goodness in store today thanks to EVGA’s Z87 Stinger. EVGA jumped on the enthusiast Mini-ITX bandwagon last generation with the Z77 Stinger, and they’re riding that wagon into the next generation. They are also touting a brand new UEFI BIOS with their Z87 lineup, which should top off their new motherboards nicely. I’ll quit rambling, and let’s get into the good stuff… Read More