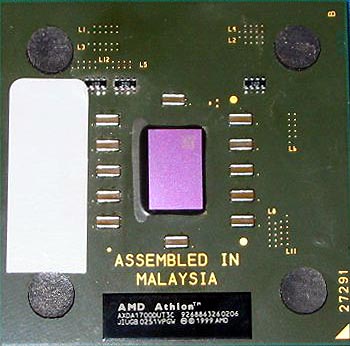 It had to happen one day – I’ve finally managed to kill a CPU by overclocking it. My 1700+ JIUGB is no more. *sniffle*

Before I get round to describing the circumstances behind my CPU’s death, I’m going to take a minute to explain why I’ve decided to share this story.

There’s a lot of talk about the merits and dangers of overclocking, and as with most items of discussion, the voices that shout the loudest are the extremists. As with most things in life, there are extremists at both ends of this debate.

The first group believe everything written in their warranty disclaimer. When AMD made the 1700+, they decreed it should run at 1466 MHz, and God help anyone who dares to run it even a single MHz faster – they’re doing irreversible damage to their CPU. Okay, it may not be instantly visible, but that chip is slowly losing its electronic marbles, and eventually, it’s going to die. You mark my words.

The other camp believes that with CPUs, anything goes. Crank up the MHz, crank up the voltage, increase the cooling. If it doesn’t work stably, just back off a little and everything will be fine. No harm in trying, because they’ve never heard of anyone killing their chip through overclocking. The only way to do that would be to overvolt it by 400% and run Prime 95 for like, a month, man. Without a heatsink, yeah! And only a total n00b would do that, right?

Well, the real truth lies somewhere between these two extremes. Running a CPU out of spec isn’t certain to kill it, but you can’t guarantee it won’t either.

My first PC was powered by a Cyrix (remember them) P166+. It ran pretty hot, but I still managed to overclock it from 133 to 166 Mhz, with only a small increase in voltage. That chip ran and ran until I sold the computer 3 years later. For all I know, it’s still going now.

I took the proceeds from the sale of that computer to go towards my next computer. This time round I planned to correct all the mistakes I’d made building the first one and concentrate on getting a good, upgradable core of components. This worked to some extent – four years on I have the same monitor and the same external peripherals.

This computer had a 500 MHz Slot A Athlon in it. Okay, it was the slowest Athlon ever made, but I was still the envy of the whole geek community in school. I actually killed that processor in the process of overclocking it too – opening up the plastic cartridge for the 20th time to re-solder some surface mount resistors, I managed to chip the core with my screwdriver.

Still, the inevitable upgrade CPU was a killer. AMD was having magnificent yields in those days, and the 700 MHz chip I purchased turned out to have a 950 MHz core inside. My motherboard held me back at the time, but I bet that baby would have reached a GHz with the right kit.

Slot A was not long for this world, however, and eventually I moved to the socket A platform. Money was tight though, so I ended up with a Duron 1200, which would just about run at 1300 MHz with increased voltage. Not a great overclocker by any stretch of the imagination.

So, why have I given you my life story? To point out that I’ve never had much luck in the past at getting hold of one of those ‘golden’ chips that overclock by 50% no sweat.

That is, until I replaced my Duron with a 1700+ Thoroughbred B.

I was really lucky to get hold of one, because I bought it blind and at the time I was much more likely to get a Palomino or Thoroughbred A. I still remember it arriving in the post, and me nearly falling off my chair when I realised what it was. The forums were (and still are) going crazy about how the Thoroughbred B cores could reach 2 GHz without any problems, and sometimes higher.

So, in it went, and yup – 2 GHz was no problem. But like most overclockers, I wanted more. It was running pretty cool, even though it was aircooled, so I decided to aim for 2.2 GHz – a 50% overclock. After a bit of fiddling, I eventually got it running. 2.2 GHz, seemingly stable at 1.7v. Time to make sure it really is stable.

So, I set Prime95 running, and go of to the cinema. When I come back, my computer’s showing a black screen. Thinking “that’s weird” I reboot it. It posts fine, gets as far as starting Windows, and then restarts itself.

Thinking maybe it’s had enough of 2.2 GHz and 1.7v, I return it to its default settings. Still won’t boot into Windows. I try re-installing Windows XP, thinking that maybe a trashed installation is causing it to reboot. Nope – that crashes out too.

Maybe they’ve got something there, too. Maybe it should be treated as a warning for all you other overclockers out there – your CPU’s more fragile than you think, so look after it.

But I think the real moral of the story is that every hardware failure has a silver lining – forced upgrade here I come!

How I moved some motherboard capacitors – Joe