I had some issues with my desktop computer which forced me to use my notebook extensively – well, actually exclusively (had to RMA the Mobo, CPU and GPU). Normally I use it forabout 5 to 30 minutes; occasionally I’ll do a 2 hour session on it.

But with my desktop down, I was using it all the time – which means it was turned on from the time I get up until I go to bed 18 hours later. I never realized how hot it was getting. Time to do something about that, especially if it was going to take a few weeks to get all the RMA’d parts for my primary rig, which btw is a X2-4400 & eVGA 7900GT-CO on a Asus AN832-SLI board.

So I looked at those notebook cooling pads but simply was not impressed with most of the models out there for the price – the CFM was severely lacking in every single model – but what do you expect when it is powered from the USB port. Then I thought perhaps I’d build my own notebook pad, but I didn’t really feel like figuring out how to power the fans.

Then an idea struck me: Lift up the back end so air can flow under it and the fan doesn’t have to work so hard to suck that cool air into the notebook.

So my notebook was about to get a….erm, get a….hmm, what was it going to get?

Well, I sat there thinking about different ways to do something, used pencil and paper and drew a few ideas that I thought I could make out of plexi or wood. Then I gave up.

A few days later I was rooting through my PC-parts/tools brief-case doing a little organizing. I came across all of my Cooler Master Stacker STC-T01 case PCI cover brackets. Since I filled that sucker up with knobs, cards, etc… I had pulled all of them out and tossed them into storage.

I also noticed that I had some little rubber “feet” with the peel off sticky flat side – the half-rounded kind. Here’s a picture of the extremely advanced, space-age, high tech parts:

My mind was a blur of activity. I started smiling that evil, little smile we all smile when we suddenly come across “the solution”, where nothing can stop us until we have achieved our objective, no beer, wine or wife can get in our way.

So here it is for all of you to view, simple, yet I think very elegant. If you are slow and have not guessed where I was headed, I’ll spell it out for you:

Stick the sticky feet onto the PCI bracket and place under notebook to prop it up.

And without further ado, I present to you what I like to call “DrakeFeet”, or at least one of the two I am using. They are NOT as big as my feet, but they are a part of me as if they were (OK, that was so overly dramatic).

I basically used the 90 degree angle of the PCI bracket, pointed up, as the cradle, putting the rubber foot on the opposite side. Then I slid them under the rear of the notebook about 2-3 inches in from the edge – making sure that I was not covering up the fan or air passage ways, or ports. I also made sure that I was not putting undue pressure on anything underneath.

The neat thing about this is that the PCI bracket fully cradles the notebook, thereby applying equal pressure. Further, since it does this, the metal bracket does NOT touch my desk at all, so I don’t have to worry about scratches on my desk that I paid big bucks for. There is complete stability for typing, etc:

No movement or rocking of the notebook at all. The only real issue is that when I want to move the notebook forward or back, depending on how close I’m sitting to the desk, I must reach around and “pick-up” the metal bracket too. But my solution actually makes it a bit easier to move, since I can now place a finger or two under the notebook and another finger on the PCI brackets – it is definitely not a deal buster.

The only other mod I considered (and it was actually part of the original idea) was to use Velcro between the notebook and the PCI bracket to “connect” them together. Problem right away with that was that I’d have to put Velcro tape onto the actual notebook, which was a big problem given all of the components openings underneath, so scratched that immediately.

Here is a pic of the rear of the notebook showing the placement of the two brackets: 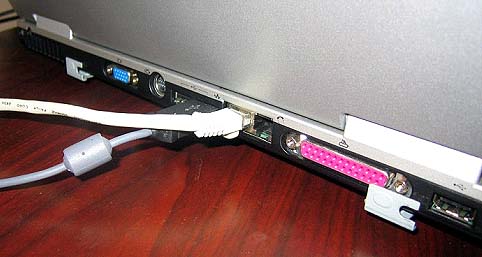 Also, after that is a pic from the side showing how the bracket cradles the notebook and rests fully atop the rubber feet:

BUT, DID IT HELP?

The real questions is, did it help my temps or was this just a colossal waste of 5 seconds of my life?

I utilized a handy little program called “Notebook Hardware Control” to monitor the CPU temp and the hard drive temp. Note my notebook has the Centrino mobile technology and has Dynamic Switching enabled “normal” operation – it seems to run it at 600 Mhz (6 x 100 Mhz and throttles as high as 13 x 100 Mhz but the throttling range indicated in SiSoft Sandra said 17% – 100%). I decided to leave all of that alone, since that is how I use the notebook and the way I decided to test was going to ramp it up to 1.3 Ghz anyway.

Basically I didn’t feel like messing around a whole lot with the testing, so I did the following to get a quick and dirty sample of if it was worth it or not.

Interesting side note: The keyboard gets quite a bit hotter when running under battery, but I had it plugged in for these tests.

55ºC
45ºC
Did not turn on at all
Warm, but not uncomfortable
CONCLUSION

Well, I’d say this 5 second project was a huge success!

Cheap, light and easy. If you are traveling, these little brackets take up no space at all. Of course this doesn’t help if the notebook is on your lap, but when it’s on a desk it’s a fairly uncomplicated, but decent, solution that allows more/better air flow.

My next adventure is going to be to buy the Antec Notebook Cooler – it seems to have LOTS of holes for airflow. I saw one for 15 bucks – normally sells for 40 and I thought it might be fun to try one – of course I’ll try it WITH and WITHOUT the “DrakeFeet”.

Hope this inspires someone to be even more creative than I was and come up with another cooling solution for notebooks. Finally “DrakeFeet” is not registered, copyrighted, or otherwise secured. I know, I know, something this good should be patented (Yes I’m being silly). Enjoy.

SUMMARY: One of the “Slim Jims” of pen drives. I received a number of emails regarding the size of the Memorex 1GB Travel Drive with a number of readers mentioning the SanDisk Cruzer Mini . As it happens I do

Your responses to what you thought about that little quarrel the other day are very interesting. It’s almost like watching spam filters operate. The information goes in, and then it’s subject to a number of rules. If it breaks one

A few days ago, we pointed out Intel has had delays in opening its 45nm plant in Israel. Since then, signs of this have multiplied. Asus expects “severe shortages” of Atom processors until “well into the third quarter.” That level