SUMMARY: UV camouflage for the wiring in your PC 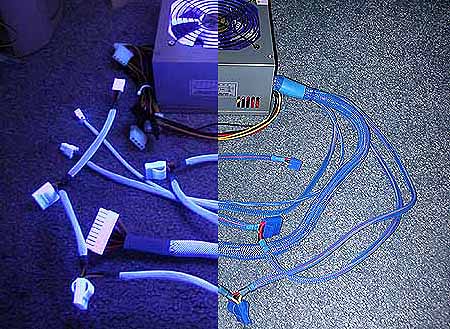 A lot nicer than yellow, black, and red spaghetti everywhere.

John at Jab-Tech was kind enough to send us a number of items to take a look at. Where these by and large would get purchased together,
we’ll look at them all here at the same time.

The group of items John sent are for sleeving the wires of your power supply, and include;

John was nice enough to also include a single ConnectorZ ™ of each color, as well as some other UV connectors
(which are sold seperately) to round out the complete catalog of UV plugs he has in stock

John is working on a solution to offer sleeving PSU’s as a service upgrade for those who purchase a new power supply from Jab-Tech.

While he does offer this as an option now, he doesn’t have the hours available to keep up with the demand. He hopes to be able to offer this fully in the near future (perhaps this summer), and list
this option at his site. Inquiries on purchasing a new pre-sleeved PSU at Jab-Tech can be directed to
[email protected]

Let’s start by looking at each item. 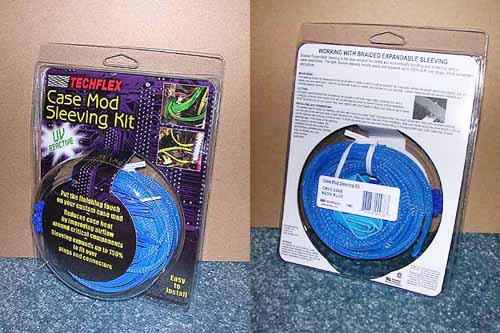 Included in this kit are three things; four sizes of sleeving, three sizes of matching heatshrink tubing, and a dozen matching zip ties. 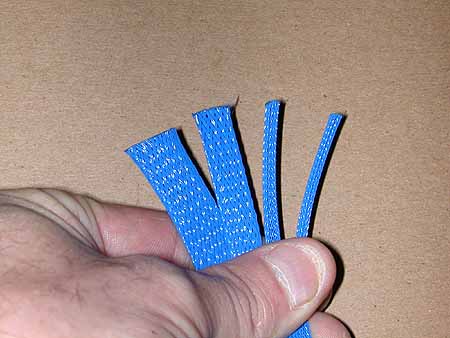 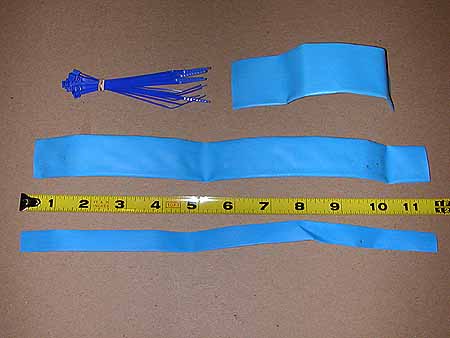 The material used in this sleeving is plastic, and very flexible. It has the ability to expand up to one and a half times (150%) it’s original width, which makes it quite
easy to work with.

As it expands so much, you will use the smaller two sizes of sleeve up long before the larger two. But there’s more than enough included to completely sleeve an entire PSU, and
have some left over for other wires inside your case as well.

There’s a bit of a technique to working with this, and it takes a bit of practice to master. I’ll elaborate on that procedure shortly. 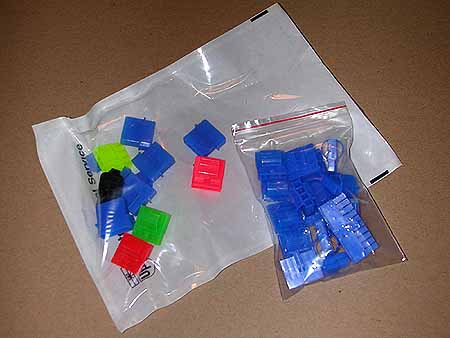 For more info on these, go to; www.connectorz.com

These kits (in the smaller bag) come in two varieties, Basic and Pro, with two differences between them (noted below).

In the larger UPS pouch, John sent a number of individual pieces so that I could show them here, including one 4-pin LP4 Female Molex of each color available,
and some 4-pin LP4 Male Molex and 3 pin fan connectors (these again, are sold separately). These last two items are seen below; 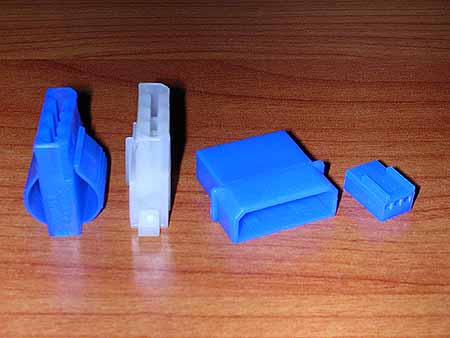 To do all the wiring in your PC, you’ll want to get a few of the two connectors on the right side here.

This picture illustrates the major difference between the “Basic” and “Pro” kits, although the Basic version is represented here by a standard non UV connector.

The other difference between the Basic and Pro kits is that there are twelve 4-pin LP4 Female Molex Connectors in the Pro kit, versus ten in the Basic kit.

These shots illustrate the six colors available, under normal and UV lighting (note the black is not UV reactive)

The six colors, as shown left to right above are:

John stocks both full kits (Basic and Pro) as well as 3 and 4 pin Molex ConnectorZ ™ in all six colors.

This is one of two tools John currently stocks, and is used to easily remove the terminals from the female 4 pin Molex connectors. He also carries the tool for the
male connectors (which looks identical to this, but differs in size slightly) as well.

Not available at this writing, but due to be added to his inventory shortly, is the tool needed to remove the terminals from the 20 pin main ATX and 4 pin +12v connectors.
This tool is very different from the first two, and would be a big help in swapping over these two connectors.

Where that tool wasn’t available yet, I had to modify some things I had handy to get the terminals out of these two connectors. I started with a hat pin, and then did
some grinding and filing on some surgical tweezers I had in my toolbox. While effective (and certainly better than the hat pin), this was still a very slow method. The correct
tool would be much faster and easier (and remove the chance of damaging the terminals, which both of my remedies did occasionally). 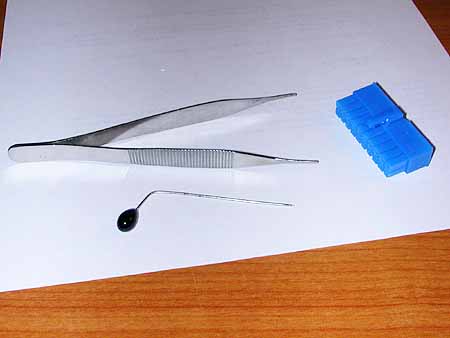 The proper tool would be so much easier… =P

John mentioned to me with practice, it takes him a little over 4 hours to sleeve a PSU. Where this was my first attempt at this, and I didn’t have the tool as mentioned above,
it took me about 8 hours to sleeve this PSU.

After trying my hand at this, I can now easily see that what he charges to pre-sleeve a PSU purchased from him is more than a fair price.

Working with a 4 pin Molex lead, let’s get a couple “truths” clear first (this applies to the floppy connector too);

So, given that “1” = Yellow, and “4” = Red, that leaves the two center Black wires (#’s “2” and “3”). To keep these two straight, as I removed them, I marked the #2 wire terminals
with a Sharpie marker. Sharpies are fairly resistant to getting smudged or wiped off. Just mark up higher on the terminal, away from where it will connect. (See below) 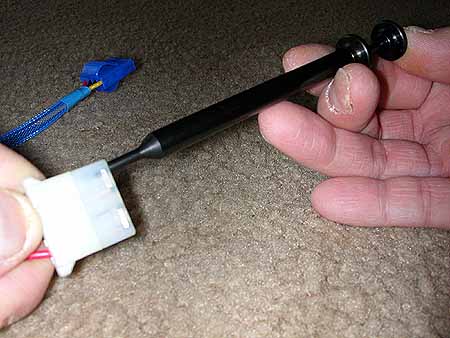 Removing the terminals with the tool is very easy. Push the end of the tool over the metal terminal fully, and then the tool operates similar to a syringe. Push, and out pops the
terminal from the connector. 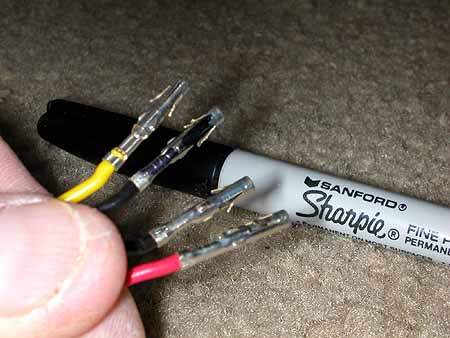 As mentioned, to keep things straight, I marked #2 with a Sharpie. Do whatever suits you, but be consistent. Mark #3 if you like, just stay with it all the way through. 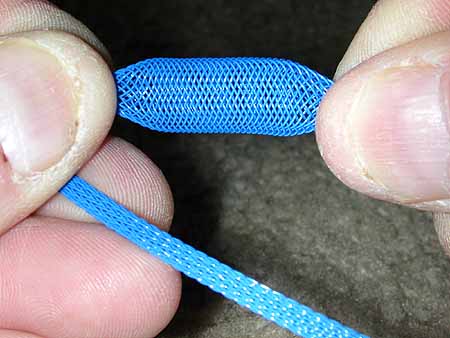 I wrapped the ends of the terminals with a bit of tape, so they wouldn’t snag as I worked the sleeving over them. To get the sleeving on, hold it like shown above, and push the
end of the sleeve against the ends of the terminals, until it expands over them. Then, push it again, so it expands, and let it sort of push itself on a bit further. And so on…
Visually, it’s kind of like an inchworm…the back feet move towards the front (step one), then the front feet move away from the back (step two). It takes a bit of practice to get
the motion down.

When cutting the sleeving to length, the manufacturer recommends using a hot knife, to melt the ends of the strands slightly, to prevent fraying. I used a lighter (carefully!!).
Either way, you want the ends to get melted together slightly, so the sleeving doesn’t come unraveled (which it can do fairly easily, if not sealed).

John mentions that when he measures how long to make the pieces, he adds 10% to the length, and cuts there. This is to allow the sleeving to expand over the wires. 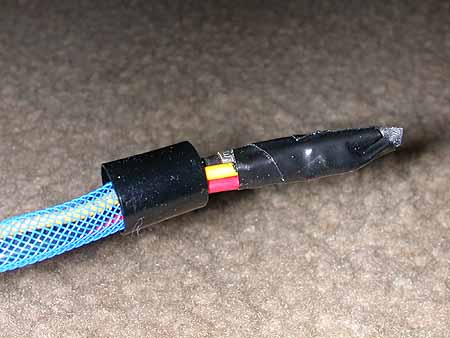 Once the sleeving is in place, cut a short length of the appropriate size of heatshrink tubing, and slip it over the end of the sleeving. Using the lighter again, (or a hair dryer
will work fine), carefully heat the tubing until it shrinks to grip the wires tightly.

Finally, install the connector. Remember, #1 is always Yellow, #4 is always Red, and if you marked one of the two Black wires, they’ll go right back from whence they came.

After you’ve done the power supply, you’ll likely have a bit of material left over, and can do some of the other wires in your case, as well. Some good candidates are; 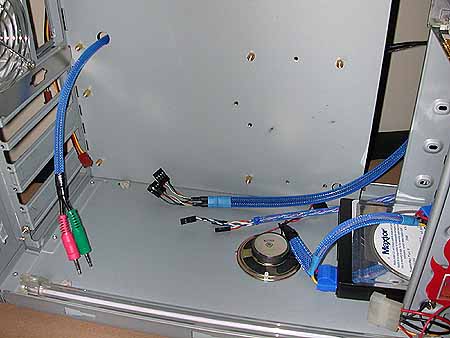 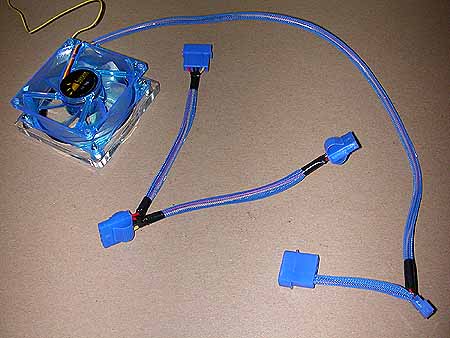 This one game me some trouble, but mostly because I didn’t have the correct tool for the job, and had to improvise. There’s also some planning involved, as you need to keep
track of twenty wires, that must be reconnected properly. 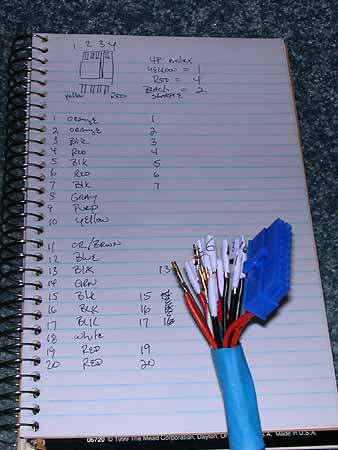 I started out by making a list of the 20 wires, and what color they were. I then pared that list down by what colors are duplicated. There are several wires unique in color,
and a majority that are repeated. Those were the ones I was concerned with. These I labeled individually with a numbered piece of tape.

Now, getting sleeving over twenty terminals is not unlike putting a sweater onto a porcupine. I sat and thought about how might be a good way to do this when I had one of those
“epiphany” thingies…=P 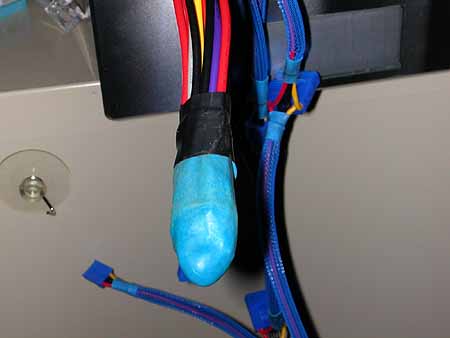 I chopped the thumb off of one of my latex work gloves, put it over the ends of the wires, and taped it in place. This went through the sleeving quite easily. =)

It was a bugger, but in the end, worth the trouble.
The End Result;

Quite a difference. It’s actually a fair amount brighter that the picture shows. 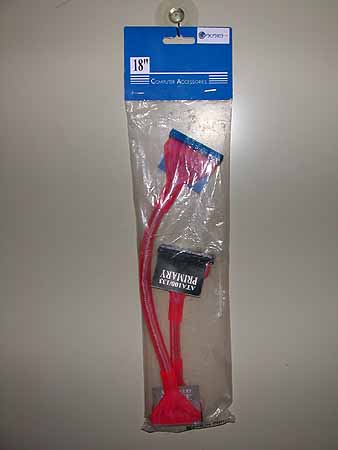 John also sent along one of these, to add a bit of UV contrast to the pictures. He stocks several lengths, and colors to choose from (and non-UV reactive cables too). He’s also got
a good selection of lights, UV and otherwise, as well. 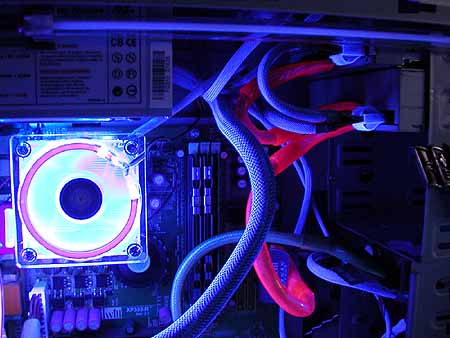 Once everything is installed and lit up, it’s time to sit back and admire the show.

This is one of those modding jobs that’s time consuming. You don’t want to rush through this, as it will show in the finished product. Take your time and get everything nice and tight,
and it will last for a long time too.

The cold cathode light I have in the bottom of the case is supposed to be UV, but looks more “white” instead. At least in pictures. In person, this really looks better than it does here.

As I write this, he’s expecting the main 20 pin ATX power/4 pin 12v Aux cable terminal tools in soon. He does currently have the tools for the 4 pin Molex connectors (male and female).

If you like how this looks, but don’t know if you’d want to do it yourself, John does offer this as service upgrade if you buy a new power supply from him. Inquiries about this can be sent to
[email protected]

I’d like to thank John at Jab-Tech for supplying me with the items pictured in this review.

A bit of a problem is emerging with the high-end TBirds. We heard from some computer fair retailers that AMD is getting stricter about product returns. It looks like resellers are trying to pan off OEM chips back to AMD

SUMMARY: Surge suppressors can turn into unprotected power strips, and you’ll never know it. I was talking with Brett, my EE pal, and somehow we got to surge protectors. Brett casually says something like “…and of course you know that

Today in New York City is a day so much like that two years ago. The sun is shining, the sky is clear and blue. But it’s different. There’s a big hole in the New York skyline, a bigger one