My first version water cooling setup I was proud to have working and leak free. But like most other people on the OC Forums, I always look for ways to improve my setup and its efficiency. Improving things on the cheap isn’t bad either.

This shows my first version: 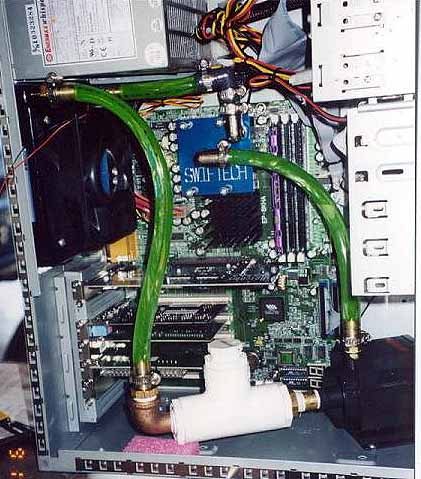 The components are a Swiftech MCW462B, Eheim 1048 pump and an original Blackice 4-pass radiator with ½” barbs soldered on cooling a AMD Thunderbird 1400. You can see how the tubing going to the intake of the reservoir kinks slightly. It only gets worse as the water warms up and alters over time. This causes the flow to drop tremendously.

The original swivel connectors on my waterblock aren’t very good for slipping ½” tubing over without using hose clamps to seal them. No water cooler likes leaks! Also, the 50/50 Antifreeze/distilled water mixture I used isn’t the most beneficial of coolant mixtures to use either. So, off to the hardware store and online shopping I go. I bought some brass connectors and some Water Wetter.

This is the finished setup of the second version of my cooling system: 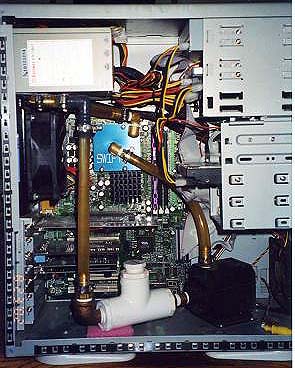 This had about a 1-2 degree C drop from using Water Wetter (95/5 ratio), as indicated by my thermistor placed on the water block and as close to the CPU die as I dare. One can see the two 90 degree brass fittings and barb on the outlet and the one on the inlet of the block with the ½” barbs on the end. Also, the plastic 90 degree ½” fitting was used to eliminate the kinking problem.

These made it easier to connect to the pump and radiator and waterblock, but also caused other problems.
{mospagebreak}

The main problem was the huge pressure drops caused by the three brass 90s.

I also had the radiator in the rear and was curious as to how large of a temperature difference I could get from placing it in the lower intake area while causing the lowest pressure drop and cleanest looking system I could think of, given my current components. This was before people on the Forums had moved beyond the simple “bigger GPH is better” myth and concentrated on pressure and flow rate simultaneously. 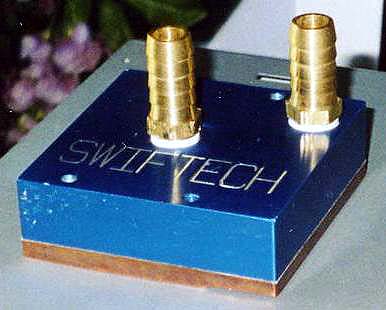 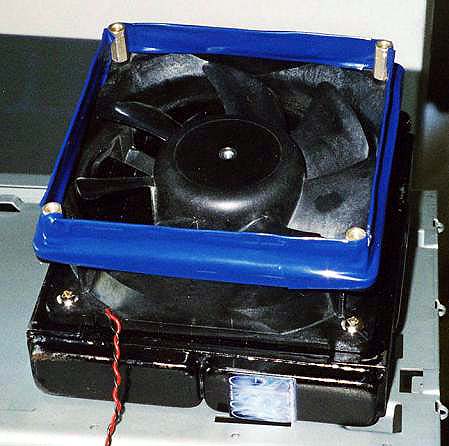 I removed the 90 degree fittings and just placed the barbs in the block. Much cleaner looking already – right? The radiator picture shows my makeshift shroud made from steel standoffs and electrical tape, for the purpose of decreasing noise from the close proximity to the front intake filter. I now realize that it was rather irrelevant, but it sounded like a good idea at the time. I would have been better served by placing a shroud between the fan and the radiator, which may be my next tweak in the future. 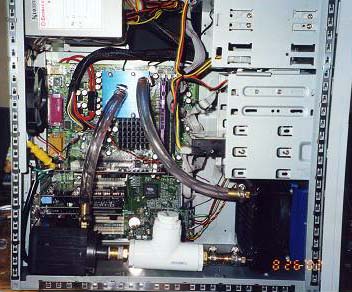 It is much cleaner than the previous two revisions by far.

The radiator exhaust goes directly into my pump’s reservoir via a small section of tubing covering both barbs. Immediately upon turning on the system, I noticed that the velocity of the bubbles through the system as I flushed them out was roughly two times that of the flow rate before, which is a very nice improvement. I saw perhaps another 1-2C drop in block temps from just rearranging components as well.

The total difference currently between ambient air and my block temp is about 10C at idle and 12C at load.

I lowered the pressure drop in the system, increased the flow rate and decreased temperatures, all without buying new core cooling components. I believe that this version as the best I can do with my current setup without resorting to new parts or higher speed fans. I’m a pretty happy camper, even if my parts aren’t the newest and greatest anymore. If anyone has any suggestions for improving efficiency further, though, I’m happy to receive them.


Alpha Vs. Gorb with a TBird