SUMMARY: The lightest case I have ever weighed – 6 3/4 pounds empty; also one of the easiest to add/remove drives. 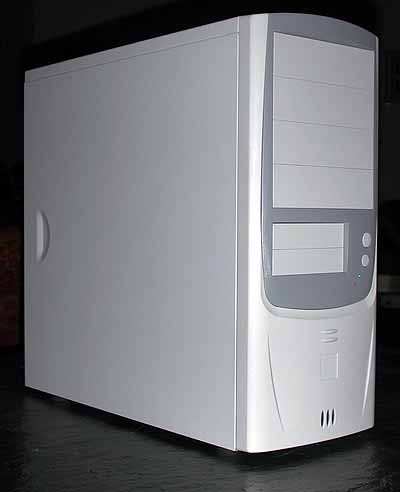 Global Win was nice enough to send a sample of their aluminum case (model #YCC-8050) to test out. Usually when the UPS guy delivers a case, he’s puffing a little by the time he climbs my steps; I knew something was different by the way I saw him literally bound up the front steps (my office window overlooks the steps).

As I accepted the package, I almost wondered if Global Win forgot to include the case! I kid you not – this is the lightest case I have ever hefted – 6 ¾ pounds (without power supply). 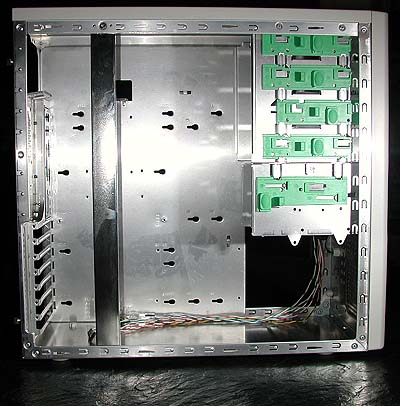 There is a removable vertical brace – you can slip a mobo behind it.

The motherboard tray has two fixed screw standoffs and a bunch of plug mounts which pop into the motherboard’s mounting holes. Mounting a motherboard to the tray fairly easy – I think the best way to do this is to insert the plugs in place and then slide it into place. Once there, the two screw mounts secure the board.

The interior is very clean and has some other very user-friendly features. Most notable is the incredibly easy screwless design for drive mounting. The green plastic things you see here 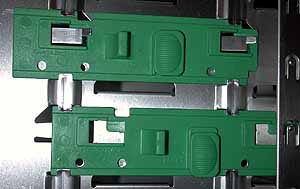 Top one is open, bottom closed and locked.

run over small tabs that index into the drive’s mounting holes. On the opposite side is a horizontal spring; you slide the drive in, and when it’s flush with the front panel, slide the green bar forward. If you want to lock it into place, there is a slide button towards the front that is a locking mechanism. 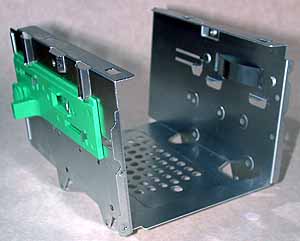 The hard drive cage is removable also. Note on the right side the horizontal spring used to hold the drive in place. The cage is also well vented on its bottom. 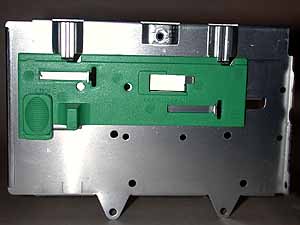 I included this pic because I am puzzled by the tabs on the bottom of the cage. I tried to fit a hard drive to it and the only way you can is to mount it upside down, which is not recommended. Nothing in the scant parts list included doesn’t even hint at what they are for.

The back is very clean – a nice opening for a rear exhaust fan. The slot covers are also screwless – just snap into place.

The front also features an intake fan mount and there are enough holes to get air into the case. Unfortunately, the plastic panel has no where enough open surface ares to get good airflow into the case; this is a problem with almost all cases. I routinely cut a hole in the front panel the size of the intake fan which gets air into the case without any obstructions.

I mounted and Iwill KK266 in the case powered by a T-Bird @ 1200, 1.8 volts, cooled with a Thermaltake Volcano 6 CU+. I used a Digital Doc 5 to place a bunch of temp probes at various points in the case and recorded temps with no extra fan, a 2Cool PC Turbo, an 80mm exhaust fan, 80mm intake fan and both intake and exhaust fans running. I ran Prime 95 until temps stabilized (at least one hour) and recorded temps.

I also recorded CPU temps with a thermocouple in the heatsink, along with CPU and case temps captured by the Iwill’s in-socket and motherboard thermistors. 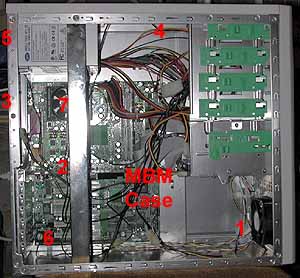 There is no question that running a case without additional fans results in the highest temps all around. The CPU results from adding an exhaust fan are noteworthy – this is due to removing warm waste area from the CPU fan’s intake; note the the temp difference between temp probe 7 and CPU temps is about the same. Not only do you have to get cooler air into the case, it has to get to the right place as well.

What I found most interesting for this case was how little an intake fan added to cooling; I thought this might be due to the lack of sufficient open surface area to draw air into the case from the front. The only opening in the case front is a small slot at the bottom of the plastic cover – very common in many cases.

I decided to do a quick test without modding the case to see how much impeded airflow affects cooling. In this test, I used the two fans and ran two tests – one with the case cover on, one off.

Highlighted in red are the most significant changes; by letting the case “breathe”, CPU temps dropped 1.7 C, once again accounted for by the 1.7 C drop in air temp entering the CPU’s fan intake (temp probe 7). If you don’t mind not having a front cover for your case, take it off and enjoy lower CPU temps.

If you are really into LAN parties, the Global Win Aluminum Case is worth serious consideration. Features that make internal changes a snap are a real bonus. If you’re just looking for a easy to use case, this one from Global Win is a good one.

Whatever case you have, if the plastic front cover is not “porous”, effectively blocking airflow into the case, either remove the case front or cut a nice round hole in front of the intake fan – it will give you better case cooling for very little effort.

Thanks again to the good guys at Global Win for sending this our way – nice case!

In December 2001 I built a CPU water cooler to eliminate fan noise. After some initial leaks, it worked great until now – almost 5 years later, it leaked again. I could have fixed the leak but in the meantime