A classic heatsink design marred by a less than stellar base finish. — Joe

SUMMARY: Great design marred by a less than great base finish. 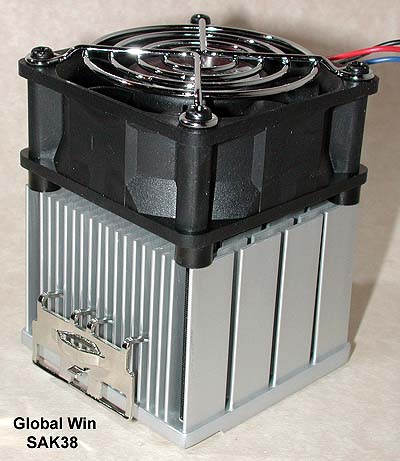 The good guys at Global Win sent over a sample of their aluminum forged heatsink, model SAK38. It features a copper insert in the base.

If you didn’t know this was a Global Win heatsink, 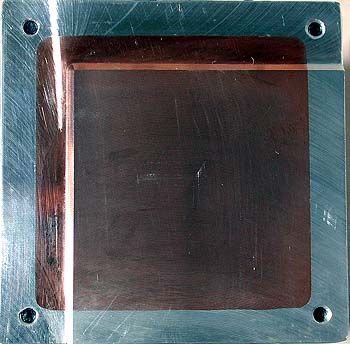 just by looking at the base you’d think it was an Alpha. However, a close look reveals where it breaks down: 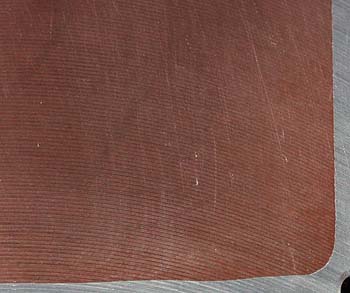 This is not a moiré pattern – there are machining grooves in the base that are visible and very apparent to the touch. Global Win ships the heatsink with a thermal pad, with the intent that, as it heats up and softens, it fills the voids.

All well and good, but if you take the heatsink off once, then you have to use your own thermal grease, and that’s how I tested it – using Arctic Silver II after scraping the pad off. 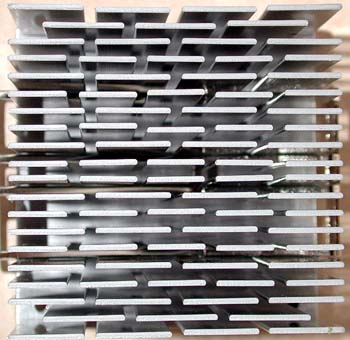 are staggered, most likely to increase turbulence (increases heat transfer).

The fan looks and sounds like a Delta 38 (complete with black label) – I measured fan noise at 67 dBA (Radio Shack sound meter 8″ from fan intake). Note that it is raised off the heatsink with spacers – this cuts the noise down a bit, but it’s still objectionable.

The clip is a grabber – it engages all three socket lugs with a vengeance. You need a screwdriver to mount/dismount it.

Overall, the SAK38 looks like a well made heatsink, but the base clearly needs work for serious use.

The SAK38 was first tested on the CPU Die Simulator which gives results that are unaffected by motherboard influences. Tests then were conducted on a variety of motherboards as examples of what users might see on their systems. Diode Temps were used in all motherboard tests.

Thanks again to Global Win for sending this our way.

Like the “Old Lady in the Shoe”, it’s hard to turn around and not see yet another GlobalWin heatsink reviewed somewhere. Joe recently reviewed the
Global Win SAK38. I’m not sure where this heatsink fits in the big heatsink picture. Globalwin is the “Carpet Bomber” of heatsink manufacturers. That is to say, they make up for accuracy with quantity. I imagine they sell enough volume of each of their models to justify the R & D and tooling costs, though.

They are certainly not overly concerned with the finish on their heatsinks. My first heatsink was the noble FOP-32. I was new to overclocking and easily influenced, so I lapped it, if for no other reason than the fact that lapping was what overclockers did. It did a respectable job with my Duron 600 running at 10×100.

Their answer to a less than perfect finish is the disdainful Thermal Interface Material (TIM) pad. This is the heatsink equivalent to “Corn Plasters”. If you’re too young to know what they are, ask your grandparents. In a nutshell, the TIM pad is a bandaid to a problem, albeit a poor one, whereas lapping is a cure.

The SAK-38 has machining marks on the base deep enough to make a sound like a skating tonearm on a record when you run your fingernail across it. Records are those black things that CDs replaced. While lapping has a certain Gestalt Therapy-like appeal to the average overclocker, I set out to quantitatively measure the benefit from doing it.

A brief operational note on the SAK-38:

I like heatsinks that use a clip which utilizes all three lugs on each side of the CPU socket. They offer a small amount of insurance against breaking off one. The SAK-38 does this, but the clip elements are a little too thick for the space between each of the heatsink plates they span. This makes the clip mechanism bind against those plates.

I tried polishing the rough edges on them using the wire wheel on my grinder, but to no avail. I did not want to impact their spring tension by actually grinding or filing them more narrow, so I decided to just put up with this inconvenience. It did make me worry a little about how self-aligning the heatsink would be, since the clip did not float as freely as I would have liked. Now, back to lapping…

Here’s the before picture of those machining marks:

Here are the temperatures recorded on my heatsink test setup:

Here’s a picture of the baseplate after lapping it: 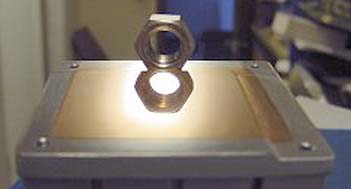 and here’s the temperatures recorded on my heatsink test setup:

So, this effort just reaffirms that lapping is more than just an esoteric pursuit.

Still, some people take a simple process and elevate it to some form of overclocking pilgrimage. You don’t need 5 grades of sandpaper and several polishes. You do need some common sense technique though:

Start with some 600 grit Wet-or-Dry paper. Keep your paper wet with slightly soapy water always. Rinse the paper every few minutes with that water to flush out the suspended particles. Depending upon the severity of the finish, you want to adjust your downward pressure and speed of stroke.

When you’re done, rinse the paper with clean warm water and sit it somewhere to dry – yes, you can reuse it many times. I generally use a fresh sheet at the start and, when I get to the final phase, I shift to an older used sheet. As the sheets age with use, they become less abrasive and an excellent polishing surface.

You are not grinding optics for a Laser Based Defense Weapon here. No need to find a sheet of glass or other calibrated flat surface. All I have ever used is a flat, clean Formica counter top. The waste water/slurry cleans off very easily and you get points for cleaning up your mess. If this process takes more than 15 minutes, then you really need the practice anyway.

From an overclockers point of view, the SAK-38, IMHO, falls “below the cut line” on AMD K7 processors. It may be okay for overclocking Intel processors, or your mother’s non-overclocked rig. If you squirrel away a few days lunch money, you can get a lot better.