SUMMARY: High performing grease can drop CPU temps with very little effort on the part of users; performance differences at low C/Ws can be significant. 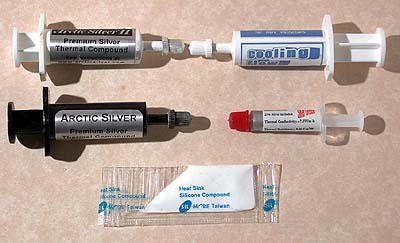 Arctic Silver on the left, Cooling Flow and Stars Silver 25% on the right and a generic white grease on the bottom.

I received a sample tube of silver grease from a Korean company called CoolingFlow. This is a non-silver grease. I have not done a grease test recently, so I decided to do a little “grease-off” to test a few of these. Arctic Silver is one of the more well known and I have some of each, so I included these along with a couple that I received with heatsinks, one called “Stars 700” with 25% silver and the other a generic white grease.

I decided to use the Simulated CPU Die Tester for this test, using a Glaciator as the heatsink. I ran the simulator at 98 watts, let it heat up until temps stabilized, then recorded Die and Ambient temps. Delta is the difference between the two and is used for performance comparisons. After each run, I used cleaning fluid to remove all traces of the grease just tested and applied another one.

Overall, I found that the “original” Arctic Silver was thicker than Arctic Silver II. The others were fairly thin under pressure and left a very thin film on the die after removing the heatsink. A thick residual coat inhibits heat transfer.

This are very tight results – the difference between Arctic Silver II and Cooling Flow are minimal and not statistically significant. Silver based Arctic Silver remains a top performer, but just because “silver” is on the label, don’t think it will perform as well as the “tried and true” brands.

In this test, Cooling Flow did a little better, but the best I can say is it’s competitive with Arctic Silver II – too close to call a winner.

Overall, Arctic Silver II and Cooling Flow will do a good cooling job between your heatsink and CPU. You don’t need a lot – heatsink pressure will compress the grease to a very thin layer, which is what you want.

However, the Cooling Flow reaults are based on a one tube sample; I have asked Cooling Flow for more samples to test and will report on expanded test results within the next two weeks.

Many thanks to CoolingFlow and Nevin at Arctic Silver for providing samples to test. Cooling Flow is not available in the USA at the present time. If you are interested in this product for resale, contact

How To Cool Your Cache

Hello overclockers out there! I have totaly open my PII300 (SL2YK 2.0V Boxed) – with no problems. Then I lay two aluminium plates (20x25x2mm) between the two cache rams and the main aluminium plate from Intel. I used a thermal

UPDATE 9/29/00: Swiftech redesigns the MCW370 and comes up with a winner. Swiftech made a major change to the MCW370 which resulted in significantly enhanced performance: The copper coldplate, originally about as thick as a matchbook cover, was replaced with

Is epoxy better than thermal grease?–Joe